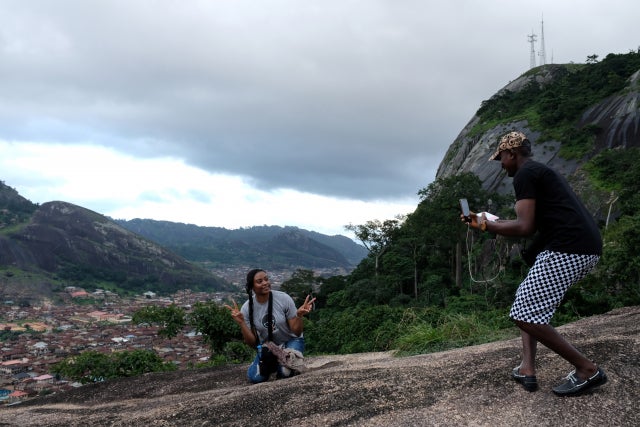 Tourism in Nigeria is nothing if not earned.

It takes eight hours by bus to travel the 250 kilometers (155 miles) from Lagos to Idanre on a road strewn with potholes and other obstacles.

Then there’s the negotiations with unscrupulous police officers and a climb of 620 steps in the sticky, tropical heat.

But those who’ve made the trip say it’s worth it just for a selfie in front of the sumptuous Yorubaland hills with Chiamaka Obuekwe, Nigeria’s self-styled “Queen of Tours”.

“I always wanted to have a picture with her! We’ve seen so many on her page,” said one traveler on the organized weekend, as Chiamaka poses with the 15-strong group of 20 to 35 year-olds, all of them in bright “Social Prefect Tours” T-shirts.

Behind them, the hills stretch out as far as the eye can see, trees rising upwards from the rocks below through a light mist in a scene worthy of “Jurassic Park”.

Chiamaka, as everyone calls her, never intended to found a travel agency but the followers of her blog and Instagram account persuaded her to, asking if they could come along.

Since its creation in 2015, Social Prefect Tours has become an institution for well-connected young professionals in Nigeria’s commercial capital, Lagos.

Chiamaka’s Instagram page currently has more than 40,000 followers, whose goal is to post a precious hashtag from across Nigeria in the same way pins were once put on a map.

“This is the Instagram age,” she told AFP. “If you didn’t take a picture, it’s like it never happened. So, it’s better you didn’t even go there.”

Beyond collecting “likes” and heart emojis, the internet has also helped Nigerians to discover and better understand their own country.

With Nigeria’s economy almost exclusively based on oil and gas, tourism development is lacking, even at local level.

There are few wild animals left for safaris and a lack of quality hotels, while inadequate roads make many places hard to reach and entire regions have been devastated by conflict.

Few people are equally going to be enticed by the oil slicks that have polluted beaches in the southern Niger delta region.

Yet Africa’s most populous nation has real hidden treasures.

Her online travel agency, where participants post their photos from trips, is one of those that has lit up social media, making up for a lack of official tourism promotion in the last 30 years.

Daniyan decided to set up her business on a family holiday in London, when she saw hundreds of people flocking to Queen Elizabeth II’s official residence, Buckingham Palace.

“I thought, ‘Why don’t people come to see our royal palaces? We have so many but people don’t know about them,'” she said.

“Traveling makes you humble and empathetic,” she added.

Nigeria as a single entity dates back to 1914, when British colonialists brought together their northern and southern protectorates purely for commercial reasons.

The West African nation is home to more than 500 ethnic groups and is almost evenly split between a Muslim majority north, and a largely Christian, more prosperous south.

Religious tensions are rarely far from the surface and each side regards the other with suspicion or, in the best case scenario, disdain and indifference.

Georgina Duke and Emeka Okocha weren’t any of either. They decided to discover their country after spending a large part of their childhood studying abroad.

They took to the road, trusting their own instincts — and dismissing stereotypes and those who said it couldn’t be done — by founding Nothing To Do in Lagos, an internet platform which lists organised trips and gives tips to solo adventurers.

“We are Nigerians. Nigeria is our country. We can’t live in Nigeria and not see it ourselves,” said Okocha.

“We want to be part of it, owning our space and fighting social restrictions.”

Best friends before being associates, they started from scratch in Lagos in 2014. Duke described it as “a bit like exploring our backyard.”

From 2015, they gradually ventured farther afield — north to Kaduna, west towards Lome in Togo and east to Enugu — driven by curiosity and a “thirst for discovery.” But there were sometimes disappointments.

“Once, we flew to Anambra State for a wedding, and saw that the Ohum caves were just two hours away by road. It looked great so we decided to extend our trip,” recalled Okocha.

But he added: “When we got there, people (in the area) said that we should have told them 24 hours in advance that we were coming.

“On which phone number? Well… I don’t know!”

Unfortunately for them, not everything was on the internet. CC

No need to change your Hawaii holiday plans, officials say