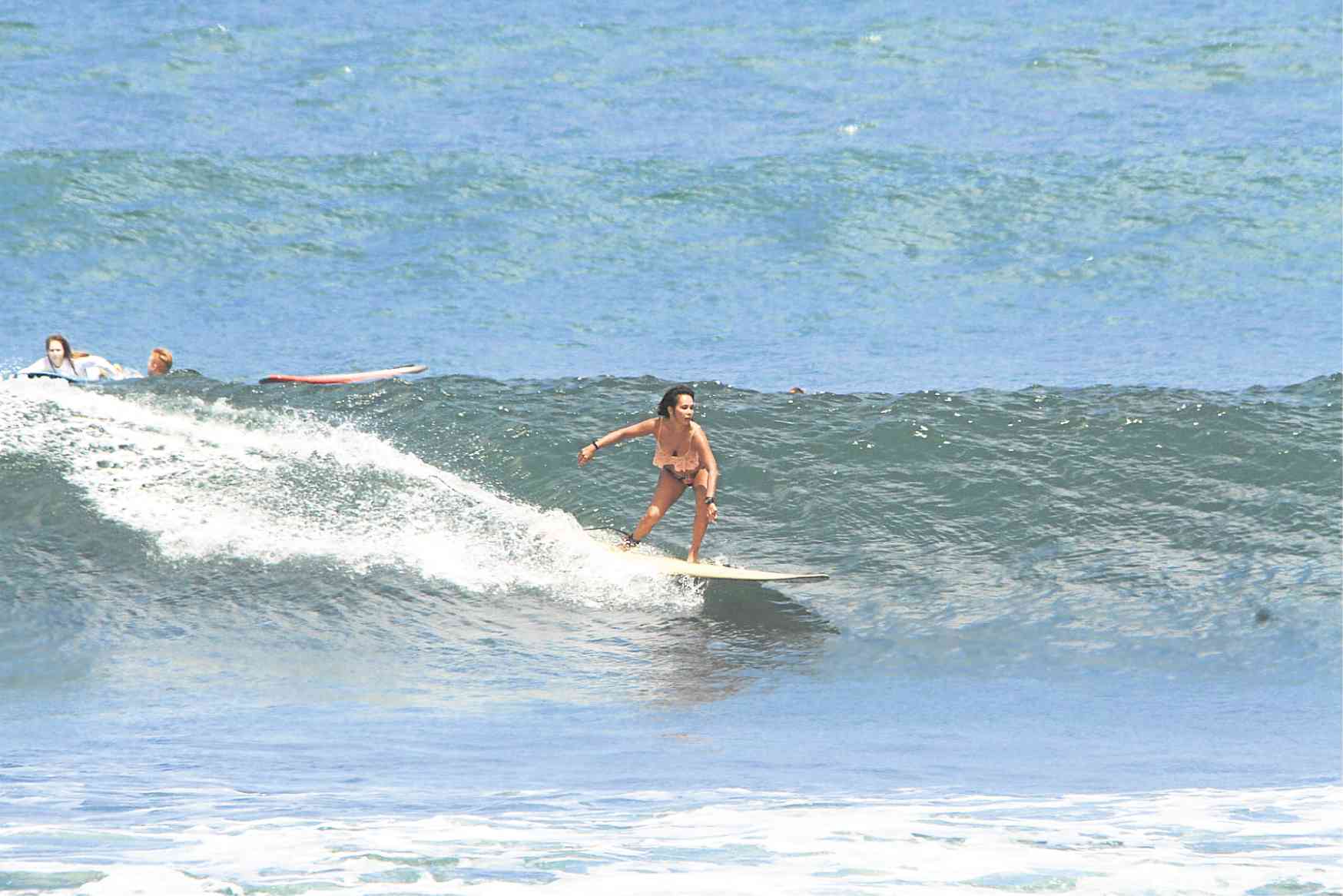 Ana Abad Santos surfs for both body and soul

Actress and advertising executive Ana Abad Santos keeps her work-life balance by surfing on the beach.

When not at her day job at Fila Philippines, she appears on teleserye, the latest of which were “Bagani” and “Los Bastardos (The Bastards),” the story of an hacienda owner who has children with different women.

Abad Santos plays one of the consorts to Ronaldo Valdez’s character.

After finishing her scenes at 2 a.m., she takes the express bus to La Union and arrives in San Juan, the surf capital in the north. The regular surfing is the secret to her bikini body. The paddling strengthens her shoulders, and she gets a good full-body workout as she balances on the board.

The sight of shimmering sand and azure waters and the sound of crashing waves soothe her soul. A loner, she enjoys the solitude that it offers.

“Being in the water recharges me. I love this lifestyle,” she says. After feeling revitalized, Abad Santos then takes the midnight bus back to Manila.

Research conducted by Washington University and the University of Irvine reveal that going to the beach eliminates stress, boosts creativity and reduces depression and anxiety. People who experience fatigue feel the restorative effects of the sea.

The research cites that mild temperatures, low tides and a few people on the water were the ideal conditions for rejuvenation. People get into high spirits on the beach because of increased physical activity, socializing and the sight of nature.

“When I started, I was going through something. I needed an outlet. Surfing has been good for the body and soul. The sea is healing,” says Abad Santos.

Today, she has taken a more responsible attitude toward surfing.

In the past few years, Abad Santos observed that the popularity of surfing has had favorable and unfavorable results. Three years ago, San Juan had only one dining place. Today there are over 30 restaurants to choose from.

Abad Santos bought some property for accommodations, and maintains a surfboard shop and a Japanese restaurant.

“The surf culture in La Union is booming. It’s good for the locals, but I hope we progress in the right way. The beaches need to be cleaned, and  our waters must keep their beauty and surfability,” she says.

Migrants from Manila have put up more restaurants, rooms and bars. Some entrepreneurs are conscientious about keeping San Juan tidy and providing livelihood for the locals, while others are insensitive to the environment. A coffee shop gives incentives by rewarding surfers with free coffee when they come with their garbage bag.

“Visitors are encouraged to keep the beaches clean. It’s good for business,” she says.

Abad Santos recalls that when she went to Bali last year, the place was filled with kooks, a surfing term for wannabe surfers who are boorish, pretentious and inconsiderate of surfing etiquette and the environment.

“We share the water. I’ve been more responsible,” says Abad Santos. Instead of merely going for the thrill, she sets an example by being considerate to fellow surfers. “It’s more about respecting the ocean and keeping it peaceful,” she says.

One of her favorite destinations is the surf town of Inamura, an hour’s drive from Tokyo. The place is known for big waves that are ideal for surfing,  swells that bend around the reefs, long vertical walls with barrels of water, and the thrilling rides on uneven sea walls.

Abad Santos also went to surf camp in Shimoda, one of Japan’s best surfing spots, where riders can catch swells all year round. It never feels crowded and surfers don’t worry about collisions. The surf campers are disciplined.

“I wish we could adopt in the Philippines that surf culture,” she says. “There is a sense of ownership. The surfers know about the community and how it works. People dispose of their trash. Unfortunately, there is no sense of ownership in our own spots.”

In Western countries, surfers are starting campaigns to prevent raw sewage from being released along the coast. Some want to save the waves by crusading against unnecessary construction along the coast. Others want to protect surf zones by keeping the beaches clean. They admonish polluters and educate the public on the importance of healthy waters.

“My interest in surfing has grown into something bigger than me,” says Abad Santos. —CONTRIBUTED