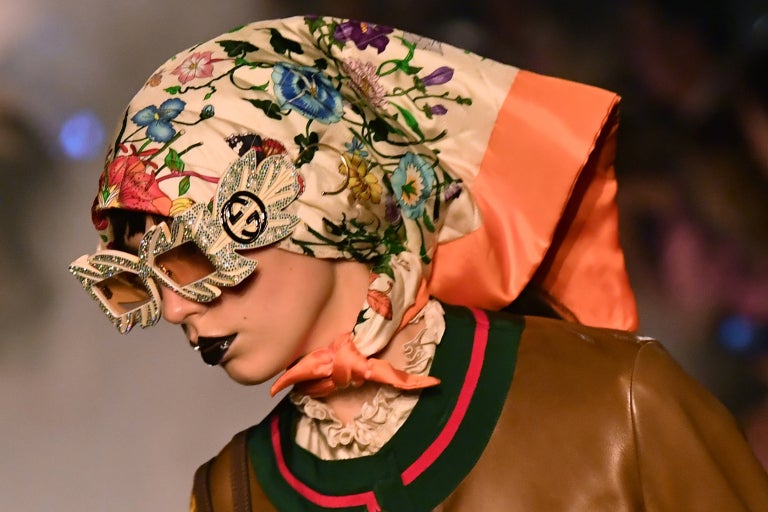 A model presenting a creation for Gucci during the 2019 Gucci Croisiere (Cruise) fashion show on May 30, 2018 at Alyscamps in Arles. Image: AFP/Bertrand Langlois via AFP Relaxnews

Is Gucci going big on beauty?

Gucci has sparked rumors that it is set to turn its attention to the beauty sector.

The luxury Italian fashion house, which is part of the Kering conglomerate, has unveiled a new Instagram account, @guccibeauty.

Yet rather than focusing on makeup products such as the ones it tentatively launched back in 2014, the account, which has already amassed over 16,000 followers, is dedicated to historic works of art curated from galleries all over the world, with images accompanied by detailed captions explaining their significance.

Title: Aurelia (Fazio’s Mistress), 1863
Author: Dante Gabriel Rossetti
Museum: Tate, London ⠀⠀⠀⠀⠀⠀⠀⠀⠀⠀⠀ Dante Gabriel Rossetti, a British-Italian painter, poet, and translator, made this c. 1863 portrait of a woman, held by the Tate, he could only imagine, taking his subject from the 14th-century Italian poet Fazio. In a poem, Fazio described his mistress’s “clear brows” and “white easy neck.” Rossetti used his own lover, Fanny Cornforth, as a model. Their affair lasted until Rossetti’s death in 1882; she was the subject of over 60 works. Rossetti is known for his role in co-founding the nostalgic Pre-Raphaelite Brotherhood, influenced by medieval art. Their goal was to be “direct and serious and heartfelt.” #GucciBeauty — @kchayka ©Tate, London 2018

According to the brand, the account lays out the vision of the brand’s artistic director Alessandro Michele, which is to offer images that “span across history, ethnicity, culture and geography,” ranging from “life-like Egyptian portraits made 2,000 years ago, to faces of nobility from Elizabethan England, to an Afro hairstyle depicted by a contemporary African-American painter.”

The account will also be used, the brand says, to showcase its “new launches in the beauty arena” in the near future, suggesting that it is only a question of time before a beauty empire is established. For now, it hints only at fragrances, beauty looks from its fashion shows and “special collaborations with artists and talents.”

A beauty division makeover would be the next logical step for Michele, whose tenure at the house has seen him shake things up with innovative catwalk shows held in quirky French locations and by teaming up with the Spanish artist Ignasi Monreal on a capsule collection. He has also snapped up pop star Harry Styles to front a menswear campaign, and pledged to make the prestige label animal fur-free. JB

Inside a Berlin fashion studio with Velt