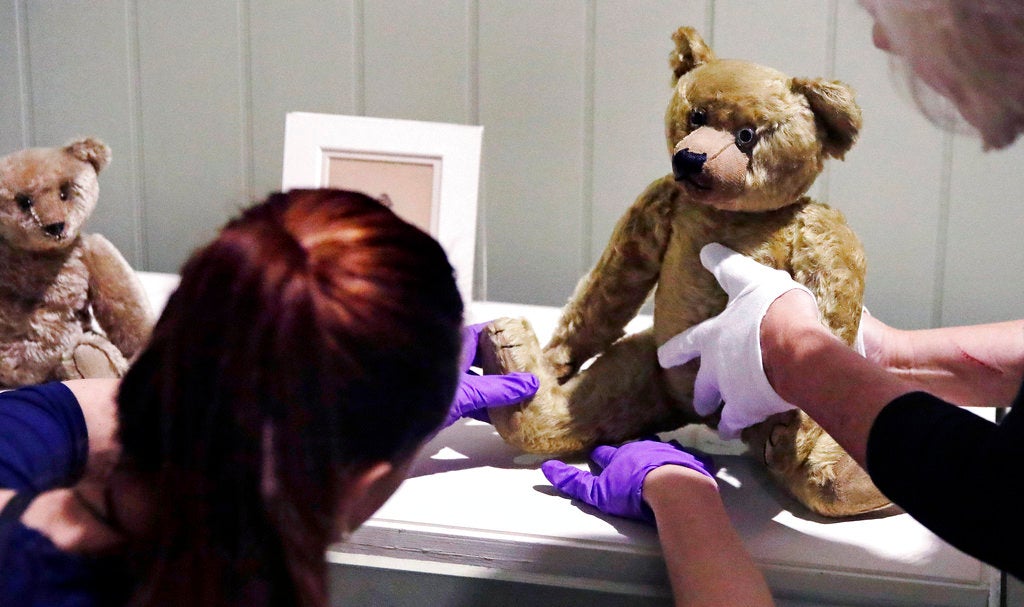 That bit of time-tested wisdom is as relevant today as it was nearly a century ago, when the beloved teddy bear and main character in A.A. Milne’s children’s books series first appeared in print.

“The exhibit addresses the fact that Winnie-the-Pooh is a global phenomenon, beloved by many if not by all,” said Meghan Melvin, who curated the show. “Surprisingly, many people are not that familiar with the origin of the story.”

While the original Winnie-the-Pooh books were published nearly a century ago, the narrative of the befuddled bear and his adventures with Piglet, Tigger, Eeyore and Rabbit remains popular with families and young children. This year, Disney released the movie “Christopher Robin,” in which Ewan McGregor, who plays a family man living in London, receives a surprise visit from his childhood teddy bear.

“At their core, these books are about friendship and adventure, and those things never get old,” said Lindsay Shaw, children’s librarian at the Providence Athenaeum, a private library in the Rhode Island capital. “Even at a time when children are bombarded by screens, they can relate to these basic ideas.”

In curating the show, Melvin’s goal was to reconnect visitors with an iconic story and introduce the books’ endearing characters to a wider audience.

“These are classics worthy of revisiting,” Melvin said. The MFA show is not connected with the movie, but it’s a “nice coincidence,” she added.

The exhibition is divided into five themes examining how Milne and illustrator E.H. Shepard dreamed up Winnie-the-Pooh and brought him to life, eventually making Pooh and his honey pot a global sensation. It’s composed of nearly 200 original drawings, letters, photographs and early editions on loan from London’s Victoria and Albert Museum and other lenders.

In Boston, there are interactive elements for visitors, including “Pooh sticks” floating by in a projected river and a slide for kids inside Pooh’s house.

The first of the four books, “When We Were Very Young,” was published in November 1924; the last, “House at Pooh Corner,” came out in October 1928.

Since then, Pooh has turned out to be more than a silly old bear. The books have been translated into 50 languages and millions of copies have been sold worldwide. In 1960, the story was translated into Latin and landed on The New York Times best-seller list.

Generations of parents felt a connection to the familiar narratives and illustrations of Winnie-the-Pooh as children, and they’ve been passing it on to their own kids, explained Lisa Kennedy, an assistant professor of illustration at Massachusetts College of Art and Design.