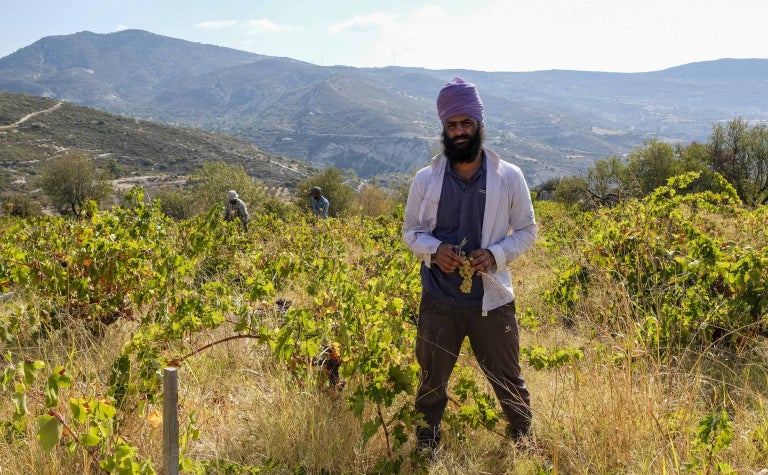 An Indian worker holds up a vine of Cypriot Xynisteri (white) grapes while harvesting with teammates in a field in the village of Monagri in the Troodos mountains in Cyprus' southern Limassol district. Image: AFP/Amir Makar

In one of Europe’s oldest wine-making regions, the fields are blushed with deep red, purple and gold as the harvest of the “wine of gods” gets underway in Cyprus.

“My heart is beating at every moment because there is a high risk,” said Filippos Karseras, at his winery in the southern Limassol region of the Mediterranean island.

Anxiously, he and his father, Panayotis, scour the blue skies daily, hoping for strong sun to dry thousands of bunches of grapes neatly laid out in straight lines in their fields in Doros village, where they produce sweet Commandaria wine.

Only 14 villages are authorised to produce Commandaria each September; a wine which may once have been enjoyed by England’s Richard the Lionheart who used Cyprus as a staging post during the Crusades.

Red Mavro and white Xynisteri grapes are left to dry for 10 days, and any rain would mean the “destruction” of the harvest, Karseras said, surveying his fields also surrounded by olive, fig and almond trees.

Given the island’s arid climate, Commandaria production can vary hugely depending on the rainfall.

In 2014, Cyprus produced 1,971 hectoliters of the sweet wine, compared to 3,339 hectoliters last year, according to figures from the agriculture ministry.

Under the regulations governing Commandaria’s production, the wine must be aged in oak barrels for at least two years.

A few kilometers (miles) from Doros, in the foothills of the Troodos mountains, a five-strong team have been hand-picking grapes since 6:00 a.m.

They include Karepreet Singh, from the northern Indian state of Punjab, who has joined the harvest to help pay for his studies in Cyprus.

The finished product will most likely be sipped by Russians, who are “huge fans of Commandaria,” Karseras said.

Russians account for around 75 percent of his sales, an indication of the close ties between the two countries as much as the buyers’ sweet tooth.

Although many young Cypriots are leaving their villages to find work elsewhere, 33-year-old Karseras is committed to continuing the tradition which lies “in our DNA.”

At the Commandaria museum in Sylikou, guide Alexei Golovanov explained the wine’s name has its origins in two military monastic orders which settled in Cyprus in the Middle Ages.

It stems from the “commandaria” of the Knights of St John and the Knights Templar, who were tasked with creating an income for the monks and began selling wine, he said.

For the island’s agriculture ministry, Commandaria is “the wine of gods and kings,” recalling how it was once called “Nama” or nectar. JB