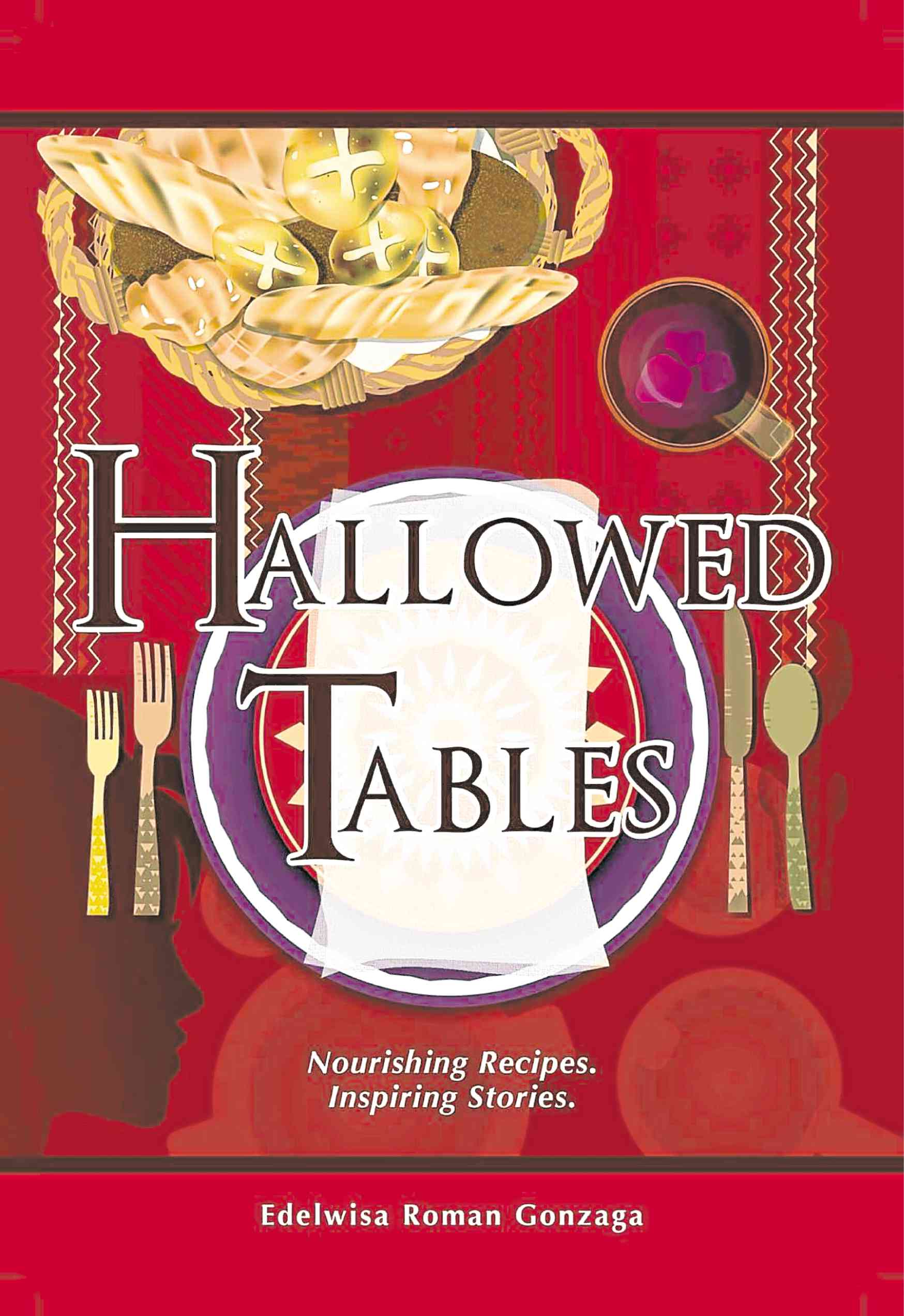 You may guess from the book’s title, “Hallowed Tables” (New Day Publishers, 2018), that it’s about food’s connection to religion. But scanning the digital copy (since the book was still being printed), we realized the contents yielded surprises.

It carries more than recipes or quotations from the Bible. It is a celebration of traditional cooking through the stories of 21 women, married to ministers, residing in the minister’s house or manse, in the country and abroad.

It is a wealth of information about traditional cooking, about certain ingredients in their different names, and adaptations that spouses of pastors make when they cook far from the mother country.

Author Edelwisa Roman Gonzaga held a corporate job in communications and telemarketing. She must have been inspired by other cookbooks featuring women of the manse and their recipes, such as “The Manila Cookbook,” published in 1919 by the Guild of Central Methodist Church and Women’s Auxiliary of the Union Church of Manila, and the 1984 Centennial Celebration Cookbook of the Lynden United Methodist Church.

Edelwisa and her husband, Rev. Conrado Medina Gonzaga, are based in Lynden, Washington, US.

Helen Tolentino of Angono, Rizal, shares a “taal na Taytay” (truly Taytay) recipe called barutak or shrimp sinigang. It is also called pinugutan because the shrimp heads are removed and pounded, with the juice added to the broth. Ripe sampaloc is the souring agent.

Her other recipe is adobong matanda, where the chicken pieces, after the dish is cooked, are fried.

Mehden Cruz of Tatay, Rizal, has a restaurant called Zackubo where she uses fresh strawberry in roasted pork. She got the idea from her La Trinidad hometown that uses strawberries as souring agent. She also serves “adoboberry” and “menudoberry.” She adds Korean kimchi to her herbed chicken stew.

Omega Raimundo from Melbourne put her biotechnology background and baking savvy to good use when she opened Omega Star Cafe, which sells Filipino pastries. Her best-selling items are Brazo de Mercedes and Ube Macapuno cake.

Carol Mendilla of the Central United Methodist in Manila decided that she would do an Ilocano padigu, or “sharing of food,” by giving her recipe of baked chicken stuffed with shiitake mushrooms and cheese.

Fe Sta. Maria Stepehen, who married an Indian pastor, gave her rice pulav and sautéed red lentils recipe. Red lentils are what one should use, she wrote, when pressed for time, because they don’t need to be soaked overnight.

Debbie Paghiligan of Morong, Rizal, said we should taste the pride of Morong, Camillus Manok, and she gave her ensalada llamado containing singkamas and cucumber to eat with it.

Nigerian Taiwo Raji Rich, who stays in Antipolo, contributed the West African Jollof Rice, a celebratory rice with tomato stew with as many versions as our adobo and eaten with grilled chicken and saba.

If you are ever in Malabon, look for Master Garden Resto and order its kaldereta, writes  Divina Cruz of Bataan. It is a recipe of her cousin, Pepe, who gladly gave its secrets—cooked with no water, with peanut butter added.

Ritzel Santos, in Ontario, Canada, loves shrimps and made pasta with shrimps, one of her young family’s recipes.

When Maria Joan Cabe of Bulacan was widowed, she ably took over her husband’s ministry. She has an interesting Pinoy kimchi that uses tamis-anghang (sweet-spicy) catsup.

Place the pork leg, cinnamon bark, star anise and salt in a casserole. Pour enough water to  submerge thoroughly the pork leg. Bring to a boil.

Add onions, ginger and whole black pepper. Simmer until the meat is tender. Put additional water as the water evaporates during the boiling.

Once the meat is well-cooked, add the banana, chicken broth cubes, ground black pepper, achuete water, and sugar. Add okra and continue simmering until the okra is cooked. Finally, add cabbage and pechay.

Turn off the heat and let the residual heat of the soup cook the leafy vegetables so that those remain crunchy.

Wash the pechay thoroughly in water. Slice into 4 pieces, and then slice each piece into an inch. Soak in salt and water and set aside for 3 to 4 hours. Wash pechay in clean water, then drain thoroughly.