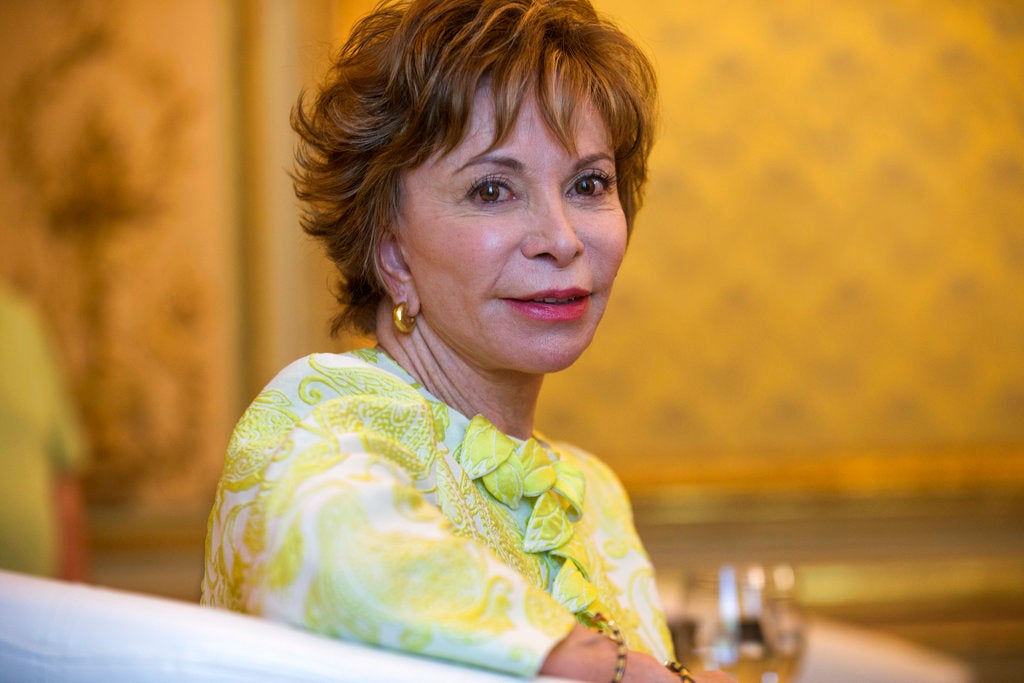 FILE - In this June 5, 2017 file photo, Chilean author Isabel Allende poses for a photograph after the presentation of her latest book "Mas alla del invierno" ("In the midst of the winter") in Madrid. Allende is getting a medal for "distinguished contribution to American letters" from the National Book Foundation. She is the first Spanish-language author to receive the prize. (AP Photo/Francisco Seco, File)

“I think legacy is a very masculine word,” the author known for “The House of the Spirits” and other novels told The Associated Press during a recent telephone interview. “I don’t think women think in terms of legacy very much. We’re more practical and we know trends don’t last for too long. People and things are forgotten. I am just very happy to have so many readers right now.”

The National Book Foundation announced Thursday that Allende will be given a medal for “distinguished contribution to American letters.”

The Peruvian native is the first Spanish-language author and first since Saul Bellow (in 1990) born outside the US to receive the prize, which in previous years has gone to authors likely to be long remembered, including Bellow, Toni Morrison, Arthur Miller and Joan Didion.

“Through expertly crafted and propulsive narratives, Allende elevates the stories and lives of women, never condescending to her readers or cheapening the experiences of her characters,” Lisa Lucas, the book foundation’s executive director, said in a statement. “Allende’s work is proof that artistic excellence and commercial viability are not exclusive concepts, and that the stories about women written with women in mind are not only good business, but also represent crucial contributions to the literary landscape.”

Luis Alberto Urrea, best known for the acclaimed “The Devil’s Highway,” will present Allende with her medal at the National Book Award benefit dinner and ceremony in Manhattan. The Nov. 14 event also will feature Doron Weber of the Alfred P. Sloan Foundation receiving the Literarian Award for the foundation’s long history of providing grants to writers.

Allende, 76, is among the world’s most popular Spanish-language writers, with sales exceeding 60 million copies.

Known for her multigenerational narratives and style of “magical realism,” she sees her life as defined by “love and violence.” She weaves personal and political themes into her stories, set everywhere from Chile to the Bay Area, where Allende has lived since the 1980s. She has been translated into more than 30 languages and has had many works adapted to operas, plays and other media, including a film version of “House of the Spirits” starring Meryl Streep, Glenn Close and Jeremy Irons. Her previous honors include a Presidential Medal of Freedom, awarded in 2014, and, two years later, a lifetime achievement award from PEN Center USA.

She has completed more than 20 books, even though her first didn’t come out until the year she turned 40. Born in Peru, she lived in Bolivia and Beirut as a child before settling in Chile, where her stepfather worked in the diplomatic corps. Allende also was a first cousin-once removed from Salvador Allende, Chile’s president in the early ’70s, and fled to Venezuela after he was overthrown in a military coup in 1973. Isabel Allende then worked as a columnist for the Venezuelan newspaper El Nacional for several years before a family crisis changed her life: Her grandfather was dying, and Allende began working on a “spiritual” letter to him that became “The House of the Spirits,” published in 1982 after numerous publishers rejected it.

Her other books include “Eva Luna,” ”The Stories of Eva Luna,” ”Of Love and Shadows” and “Island Beneath the Sea.” Allende has long seen her fiction as a way of preserving history, and she is currently working on a novel inspired by an act of heroism by the Chilean poet Pablo Neruda during the Spanish Civil War in the 1930s. Thousands had fled Spain and Neruda arranged for a boat to take some to South America. One of the survivors, now past 100, is a friend of Allende’s.

“I feel like I’m able to have the color, the sense, the feeling of that time,” she said, comparing the story to the narrative of “Island Beneath the Sea,” set in part during the late 18th century. “‘Island Beneath the Sea’ took years to research. I couldn’t talk to anybody who lived through the experience. I had to rely on books and personal letters. … To me this (the current novel) is recent history, because I know someone who is still alive. I can get a sense of it, touch it, in ways I cannot with the remote past.” /ee