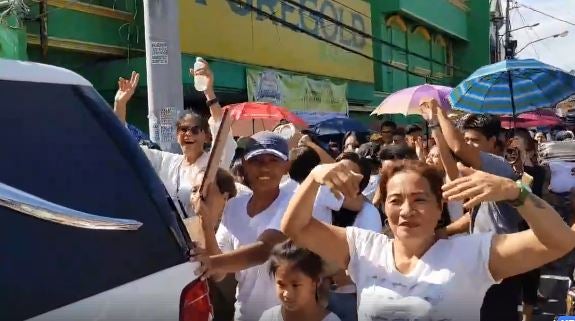 Who said funerals have to be sad? In Pampanga they put the fun element in funerals, and videos of one such “happy” funeral are making the rounds in social media. The videos were shared by Jennary Perez, a singer at Sunga Mallari Funeral Homes in Masantol town, last Sept. 19 and 20 on Facebook. The spectacle brought joy and happiness to the thousands of netizens who have viewed the videos.

In Perez’s video, the funeral singers can be seen singing in one vehicle while friends and the family of the deceased walk behind the hearse.

Dirge and tears were definitely out of place, as the singers sang Korean girl group Momoland’s “BBoom BBoom”—a number that got the funeral-goers dancing and pumping their hands in the air while walking on the flooded street.

The upbeat K-pop song was just one of their many performances, however. The funeral singers also sang Viva Hot Babes’ cheery “Bulaklak” and Vhong Navarro’s “Totoy Bibbo.”

Perez told INQUIRER.net today, Sept. 21, that the happy songs were personally requested by the deceased’s family and relatives.

For the uninitiated, the unconventional upbeat atmosphere of the funeral may be an uncanny surprise, if not absurd. But as per Perez, happy funerals are pretty common in their area.

She added that in their area, their services were in demand as a lot of people wanted live singers during the interment. “Sa lugar namin in demand po ang funeral namin dahil bukod sa magandang serbisyo, ang hinahabol po talaga nila ang may live na singers during interment.”

But for Perez and the funeral home, it’s more than just singing happy songs. She’s been a funeral singer for the past seven years, after all, and have seen almost all the possible things that can happen in a funeral.

Perez said she was proud of her job, especially since more and more people are becoming aware of their happy funerals.

What a time to dance and celebrate life.  /ra

The fog of grief