What happens when Matteo, Nico cook with Sarah G around? | Lifestyle.INQ ❮ ❯ 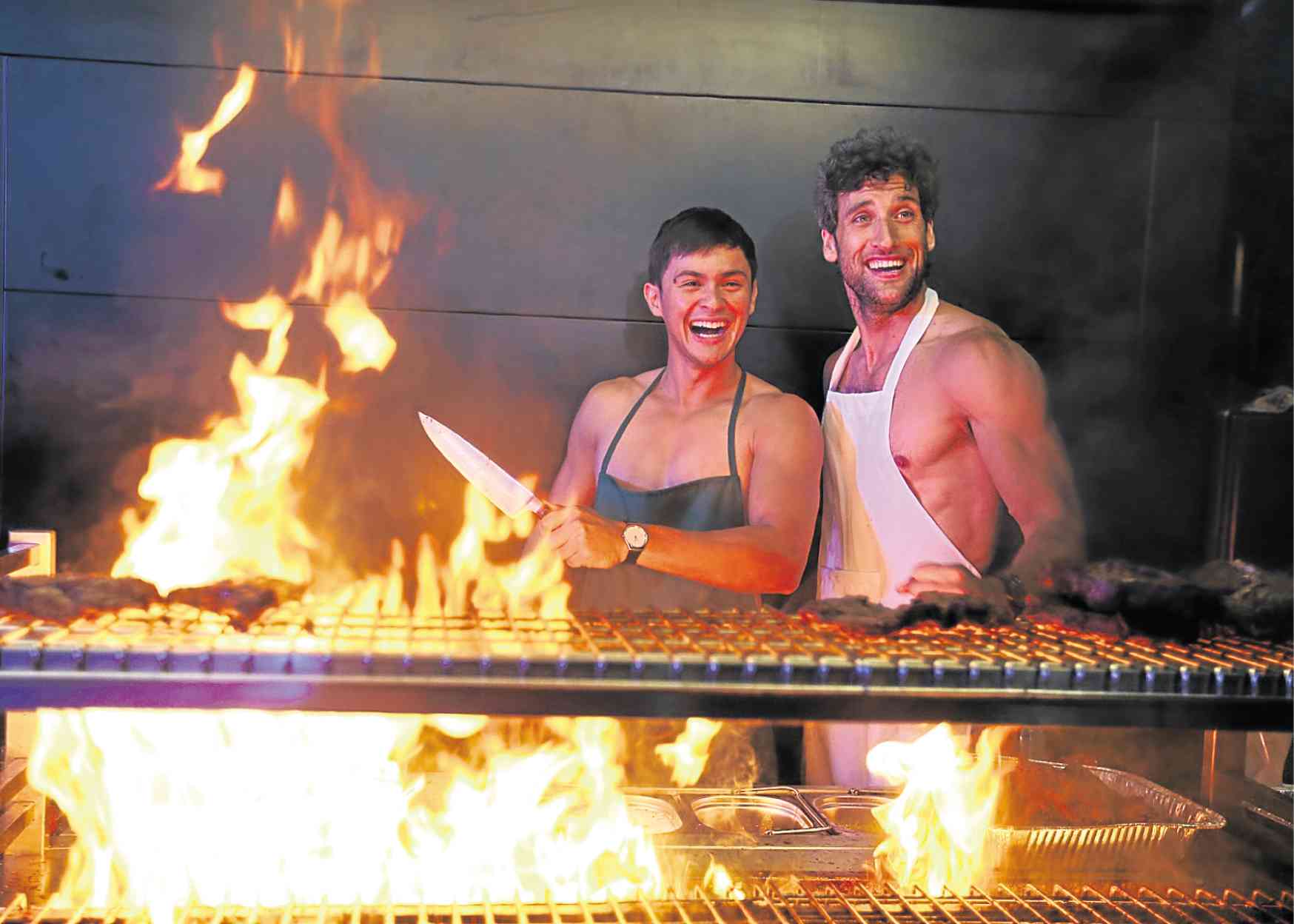 Matteo Guidicelli and Nico Bolzico, not burning the house down, just hamming it up, as dinner was being served -PHOTOS BY EDWIN BACASMAS

What happens when Matteo, Nico cook with Sarah G around?

When Matteo Guidicelli and Nico Bolzico posted a video in Instagram the last week of August—a funny/serious video of themselves (how else, from the two) —inviting people to a dinner the two would cook at the Guidicellis’ Da Gianni restaurant, the seats sold out that same day. The two promised to have pasta, pizza, gelato and wine pairings, and to work the grill for steaks.

Not that they had to publish the  menu before a dinner by the duo (#bolzicelli) could be sold out, but really, people, aside from liking these two celebrities, also know that they indeed know their food and could cook.

Matteo is known for his pasta and tiramisu (which he does sometimes at Da Gianni), thanks to his Italian heritage. Nico is known for the high-quality meat he brings in from Argentina, where his family owns a vast ranch.

The restaurant in Alabang was packed even before 7 p.m., with the diners helping themselves to an antipasti buffet of salads and pizza: Mixed Green Salad with Vinaigrette Dressing, Quattro Formaggi Pizza, Margherita Pizza, Couscous Estivo. A favorite at Da Gianni is the Quattro Formaggi Pizza with truffle.

Not counting the gelato, which really was good (vanilla, especially), it was a five-course meal starting with pasta: a tomato-based Garganelli Al Ragu Argentino, cream-based Spaghetti Caccio e Pepe, a pesto-based Tagliatelle Arugula Pesto and Cherry Tomatoes. They were served one after the other, in small portions, and we loved the contrasting tastes— fresh, creamy or with a tang. The first was our favorite.

Then came the meats: Spezatino Argentino with Polenta, paired with either Monferrato or Rosso di Montalcino, and from the grill, Ribeye, Tenderloin Medallion, paired with either Otto Bucce Piemonte, Refosco Friuli or Rosso di Montalcino. Until this Ribeye came, I really had faith in my two-day-old resolve to avoid red meat, but then these Argentinian imports, we must admit, were good, juicy and fleshy enough to make us break our vow.

Nico recalled how he grew up on the family ranch outside of Buenos Aires, trained by his father to look after the herd. He did this until he was 20, when he left Argentina and pursued his masters in global banking and another in global finance and capital markets.

That’s on one hunk. On the other hunk, Matteo grew up doted on by his Italian grandparents (Da Gianni is named after his grandfather), who fed him the best Italian dishes a Philippine home could have, making the Guidicelli kitchen a main attraction to his friends. Matteo learned to do pastas, Osso Buco, and desserts himself.  Matteo’s dad Gianluca also loves to do Italian fare, and his sister Giorgia now runs the family restaurant in Cebu, the family’s roots in the Philippines. (Matteo’s grandparents hailed from Venice and they migrated to Cebu, where they set up businesses that thrived.)

An ennobling story we loved to hear was how the Guidicellis’ two “kasambahay,” who had been with them for decades and who had learned to cook Italian fare very well, were appointed “chefs” of the family’s Cebu restaurant and given shares in the business.

What made the dinner even more palatable, no matter that it stretched late into the night, were the stories around the table, with Matteo and Nico flitting in and out to our table from the state-of-the-art grill. Their tales and comments cracked us up.

I asked Nico if he lived near Tandil—“Where del Potro lives. No!” came the reply.

The Argentine Juan Martin del Potro comes from Tandil. One of the most popular and most good-looking (guess which came first, the “popular” or the “good-looking”?) tennis champions, Del Potro emerged from a long injury-induced hiatus to make it to the recent finals of the US Open. He lost to Novak Djokovic but is now in the top 10 again.

But don’t you play tennis, I asked Nico. “I retired!” he said, again in exclamation. So soon?

Yes, he said—and you had to see him act out the reason—because in one game, he lost his cool, threw his racket so hard that it flew out of the rooftop court and down, down to the parking lot, where it hit and dented a car. Dashing down to the lot, he came upon the baffled owner moaning out loud about the damage—done to his brand new car. Nico had to apologize profusely for his fault that was aggravated by gravity,  and readily compensated the aggrieved owner for the damage.

And then what, it was a jaw-dropping moment at our table. “Then I got back my racket!”

That was enough for him to retire? No, then there was another incident, he said. Frustrated with his game, he threw his racket, and again, it went flying. (He must have really power strokes.)

Racket abuse—he and Serena Williams have something in common. “So that’s it, no more tennis for me,” said this comic who, if you don’t consider his power strokes, must be a gentle pet turtle owner, judging from his IG.

His wife, Solenn, wasn’t at the dinner because she was out of the country.

Matteo’s girlfriend, Sarah Geronimo, was enjoying all this and was helping Matteo entertain the diners, as Swatch’s Virgie Ramos kept a doting eye on the couple.

“Tita” Virgie, known for her prowess in brand-building Swatch, actually has another avocation: as the “ninang”/love guru to the couple.

Meanwhile, as all this was going on, Rowell Santiago was prepping our mind for an early exit because he had an early call time the next day for “Ang Probinsyano,” the long-running hit TV series where he plays Oscar Hidalgo, the “presidente.” Would he get kidnapped or not, he wasn’t actually answering our question. (He would get “ambushed,” as it turned out.)

Then before the “presidente” could exit, our two hosts went back to the grill—topless, with only aprons to protect their six-packs.

And that was how our evening of full tummies and even fuller hearts ended.

In a totally unrelated story, weeks later, last Thursday, our phone rang, flashing an unidentified number. We picked it up and a recorded woman’s voice came on: “Mayroon kayong kaso na iligal na droga…” What!?

Life in the time of ‘iligal na droga’—to be continued next week.