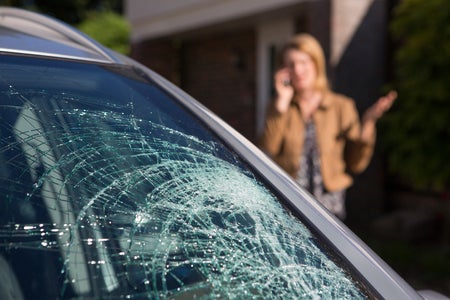 A Canadian woman continues to recover from severe injuries after a car crash last January.

Angelique Swann was accompanying her five-year-old daughter at a bus stop on Jan. 11 in Sydney, Nova Scotia. She was leaving with their dog when a car slammed into her and sent her flying into the air, reports CBC.

The mom of two recalls being conscious throughout the accident, where after she was hurtled on a house, she landed on the lawn and was hit again.

She said she didn’t see the car, but onlookers claim she managed to push her daughter aside before the crash.

Even if she was unable to move, she remembered trying to comfort her child Stella. “Mommy’s going to be OK,” she called out.

The man behind the wheel, 25-year-old Zachery David MacKenzie, was sentenced this week to five months and three weeks in jail. He also faces a year of probation and is banned from driving for two years.

It was discovered that he and the woman in the car were arguing about getting the wrong sandwich from the cafe Tim Horton’s. He pleaded guilty to leaving the scene and driving dangerously causing bodily harm.

The out-of-control car left Swann with multiple injuries, including a broken neck, fractured skull and muscle damage in her legs. This has meant near-daily pain, which sometimes medication cannot help.

Her brain remains affected by the crash: she admits having to cope with a new personality as well as nausea, dizziness and lack of focus.

She also mourned the death of their rescue dog, Link, whose last whimper she heard during the crash. Until now, her daughter is traumatized by the incident as she saw the car coming, and wishes she could’ve gotten her mom out of the way.

But these haven’t dented Swann’s positive outlook nor does she bear bitterness towards the couple.

She has been able to walk and is grateful that it was she, rather than children who are usually at the stop, who was impacted.

Her community, as well as strangers on a crowdfunding platform, have rallied behind her. Besides money, others have offered to give her car rides, while some offered to clean her home.

Her message to the couple, as stated in the report: “I hope the burden that they carry is something that empowers them and is able to teach them about themselves and allow them to grow from it.” Niña V. Guno/JB