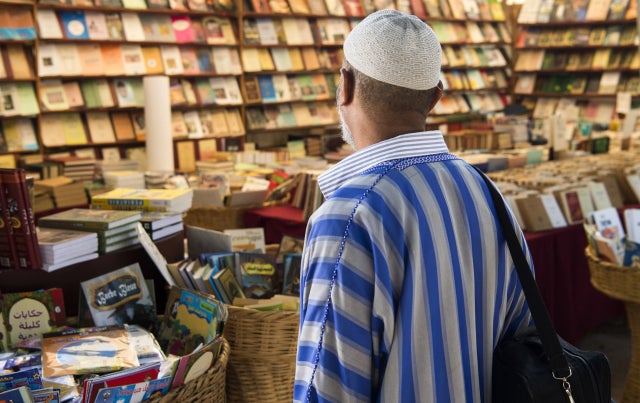 A customer browses books at a bookshop in the Moroccan capital Rabat. Image: FADEL SENNA / AFP

With a backpack filled with pirated books, Khalid wanders the streets of Rabat peddling cheap reads — part of a flourishing black market eliciting howls of protest from bookshop owners.

“It’s true that it’s not legal, but the price of these books attracts readers,” said Khalid, 25, who hawks his wares at cafes in the Moroccan capital.

A little more than a year ago, he sold pirated DVDs, but Khalid said that market was hit when it became possible to watch films on a smartphone.

One of a large number of young Moroccans working informally in a country with high youth unemployment, he quickly found bookselling the only way to make a living.

Along the main streets of Rabat’s historical center, dozens of other street vendors sell books in Arabic, English and French.

They include titles by Brazilian novelist Paulo Coelho, as well as French works by Moroccan-born writer Tahar Ben Jelloun and Yasmina Khadra from Algeria.

Despite being prohibited, the market in pirated books is largely tolerated in cities across the kingdom.

But Abdelkader Retnani, president of the Moroccan Association of Book Professionals, said the trade has led to “significant losses for publishing and distribution professionals”.

He blamed the illegal book business on “an organized mafia which makes considerable profits”.

“The authorities recently seized 120,000 pirated books, this sum is enormous but it’s still early to estimate the losses” to booksellers, he added.

Mohamed, who works in a small bookshop in Rabat, said the street trade “directly impacts our sales” in a struggling industry.

Additionally, he said the copies are “bad quality and take away all the prestige of a book”.

Retnani said there are around 100 bookshops in the country, while Moroccan media put the figure at 250.

Fewer than 3,000 books are published each year in the country, with an average print run of 1,000 copies.

But Ouazzani suggested the illegal sales “could encourage reading” among Morocco’s 35 million citizens.

Although an increasing number of Moroccans are learning to read, figures from 2014 showed a third of the population was illiterate.

For the Moroccan Association of Book Professionals, cracking down on the illegal trade is essential for the survival of their industry.

Retnani called for greater controls at Moroccan ports, a request he plans to put to authorities later this month.

“The majority of pirated books are printed in Egypt and transported by sea to be stored… in illegal depots,” he said.

But in a 2017 investigation, journalist Kenza Sefrioui interviewed a second-hand bookseller who said the black market trade began in 2005 in Casablanca.

A number of small-scale printers reproduced up to 20,000 copies of a Moroccan novel which featured in the school curriculum, before turning their attention to other works.

Cracking down on the street vendors would also boost state coffers, as the informal sector overall cost the state 34 billion dirhams ($3.6 billion, 3.1 billion euros) in 2014 lost tax revenues, according to the General Confederation of Moroccan Businesses.

Street vendor Khalid said he knew of four traders who were recently arrested, in an operation which has not been confirmed by Moroccan authorities.

They “earned a lot of money” importing pirated books, Khalid said, but their detention has by no means put an end to the trade in cheap literary works on Rabat’s streets. NVG