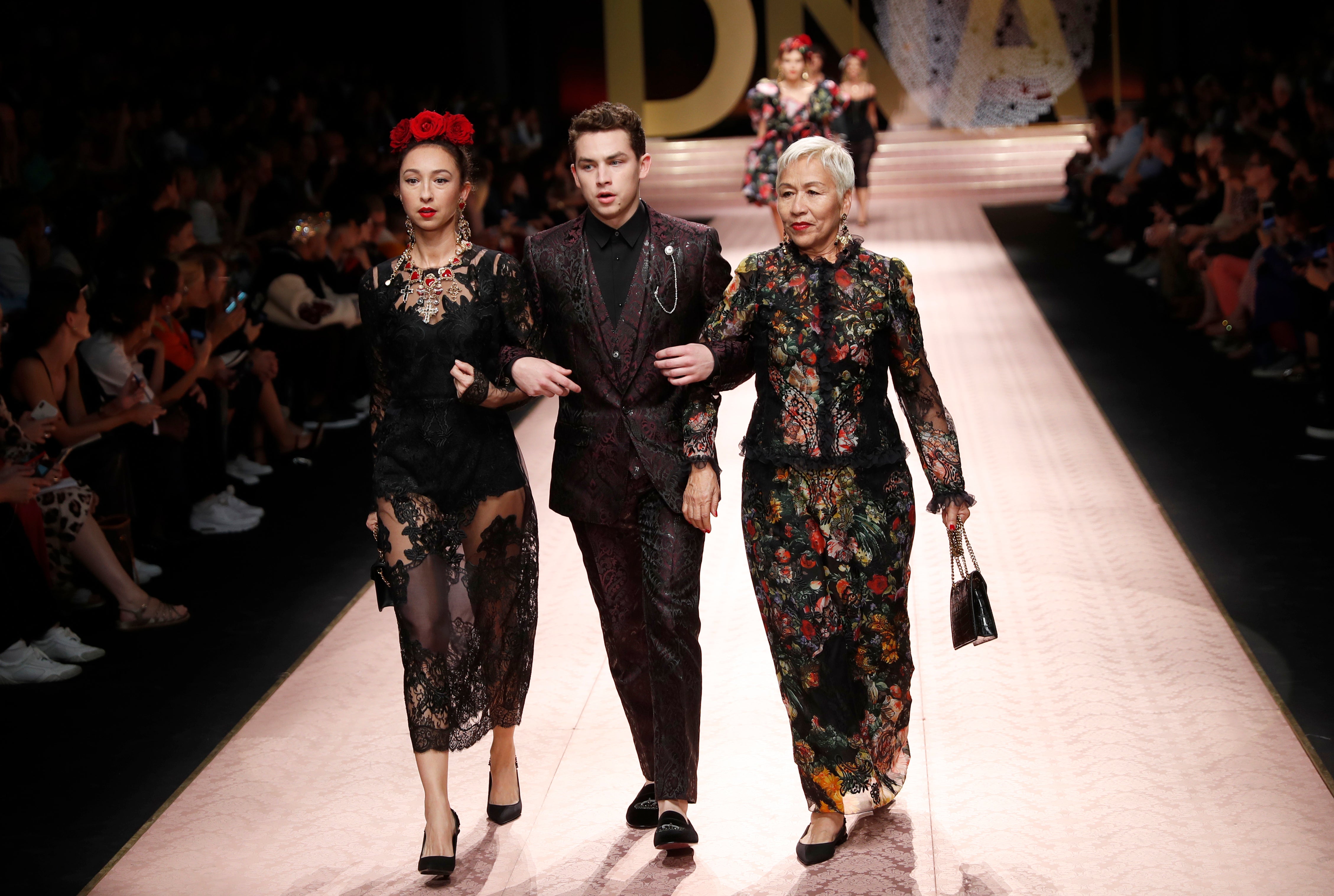 MILAN (AP) — Milan designers are embracing women of all shapes, sizes and ages, even if the young, thin model prevailed during this week’s previews for next spring and summer.

Marni’s runway included women of different sizes while Dolce & Gabbana continued their embrace of models in a range of ages and sizes for their DNA runway show on Sunday.

Highlights from Sunday’s show, the fifth day of previews of womenswear for next spring and summer:

Dolce & Gabbana retraced their DNA by bringing back some of their most famous models: Carla Bruni in a brocade suit, Monica Belluci in a fitted polka-dot dress, Eva Herzigova in a frothy black chiffon number, and a caped Isabel Rosselilni, who walked with her children Roberto and Elettra carrying her young son.

In the brand’s bid for inclusion, they sent grandmothers with granddaughters, husbands and wives, lesbian couples and curvy models, including Ashley Graham.

Cardi B kept a careful eye on the collection from her front-row seat, taking off her animal skin-covered D&G sunglasses to take in the steady stream of flash. Her eyes stayed glued on an embroidered shawl jacket with mini-skirt, mouthing, “I like that,” with a sassy shoulder shake.

While the collection incorporated the duo’s well-known motifs, including prints of the Madonna, Sicilian references and floral prints, there was also a pointed message on one netted top: “Fatto a Mano,” or “handmade,” to underline the commitment to craftsmanship.

The designers also provided a subtle hint of an upcoming project for Milan and Rome: a Christmas market inside the Rinascente department stores featuring Dolce&Gabbana styled appliances and their own range of the Milan Christmas cake, panettone, with flavors from their beloved Sicily. The hints included a Santa Claus figurine carried by a model and a print that echoes the unique panettone tin.

The lightness of being Armani

Giorgio Armani’s collection for next spring and summer was meticulously sculptured out of iridescent, dreamy blue, gray and pink textiles that collect the light. The main point of contrast, a bright fuchsia, which has become the power color of the season in Milan.

The looks had what the designer called “a liquid lightness,” derived from a range of understated colors — save for a touch of fuchsia.

“It is all mixed and very subtle in terms of colors. The color this time gave form to the clothes,” Armani said backstage.

The silhouette was elongated, often with a layer of organza that wrapped the figure or was layered over trousers for a misty effect. A plexiglass bustier gave shape to a micro-pleated dress.

Armani continued his mastery of the jacket with fluid jackets over straight trousers, or slim-fitting leather jackets with trousers colorful water color prints, and blousons with a long layer of tulle spilling out. One dramatic cape-like jacket had exaggerated military detailing on the shoulders, worn over a shimmering organza fitted suit.

The collection had futuristic touches, from a cellophane look on footwear to mesh carryalls.

“This is a woman who wants to be noticed,” the designer said. “She doesn’t slink away dressed as a man.”

Armani saluted the crowd wearing a jacket and tie instead of his usual dark blue T-shirt or sweater.

“You didn’t recognize me, did you?” he joked backstage.

The fashion crowd woke up early Sunday for a fashion call, only to go back to bed in the Marni showroom. Designer Francesco Risso’s latest kooky seating arrangement was a series of beds in the shape of an amphitheater.

Risso was exploring the classics in more ways than one. The silhouette was mostly classic and tailored, with edgy touches that gave the collection the air of a desperate, punk housewife. But he also incorporated elements from the ancient classical world, including prints with architectural elements — a departure from Marni’s traditional florals — and jewelry shaped like the Venus de Milo.

The art was all in the construction. Skirts were swept up like a sarong, worn with off the shoulder bustiers, but with sturdy fabrics that suggest the city and not light beachy fare. Risso put a new twist on the Roman toga in sleek, form-fitting textiles. Bomber jackets had half belts sewn into the back. Full-skirted dresses had front panels, some left as a blank canvass, others with prints.

Risso included in his model casting average-size women, who made clear the collections can have a broad audience.

Missoni treated the fashion crowd to a sweeping view of the new Milan skyline of skyscrapers by architects Zaha Hadid, Arata Isozaki and Daniel Libeskind to celebrate its 65th year.

Creative director Angela Missoni said she chose the terrace overlooking the City Life quarter and beneath Mario Bellini’s silvery sculpture “Comet”, because the view represented “the most futuristic place in Milan.”

“This place is a dream. This place summarizes the future,” she said.

The looks for men and women were delicate in tone, weight and structure.

Dolce and Gabbana sentenced to jail for tax dodge