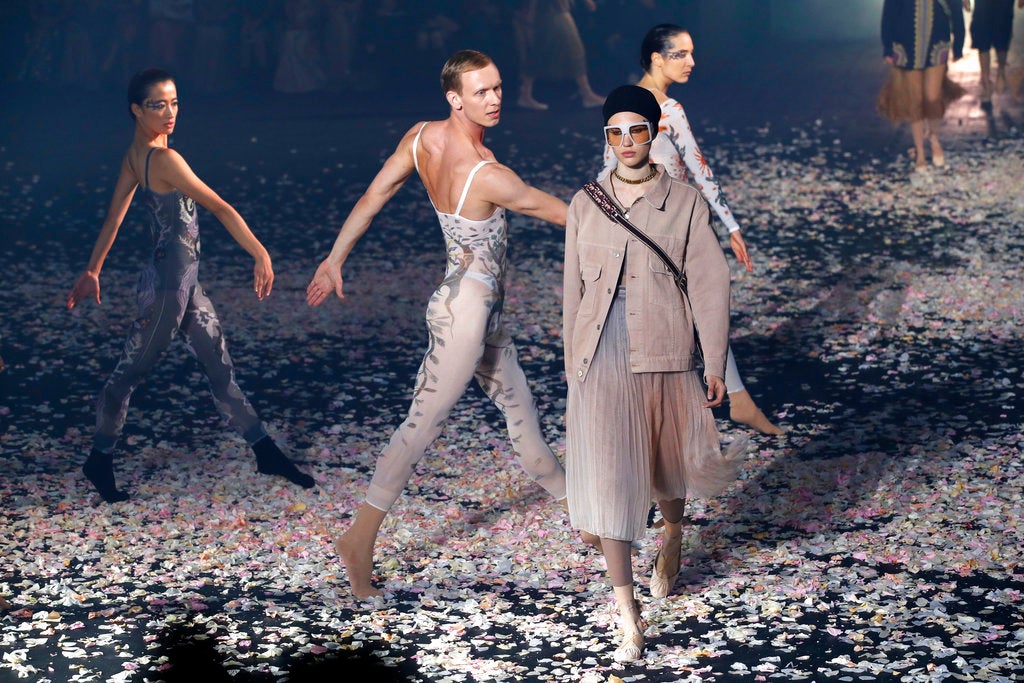 PARIS — Dance and theatricality were at the heart of Paris Fashion Week’s first day of spring shows, as American stars Blake Lively and Shailene Woodley gushed over Dior’s balletic presentation at the famed Longchamps racecourse. While, Gucci held its evening spectacle at France’s answer to Studio 54, the iconic Le Palace — once the club that showcased fashion’s most dramatic looks.

Here are some highlights from Monday:

To clouds of falling white petals, dancers clad in patterned bodysuits twisted gracefully to the clicking sound of a metronome.

This season, Dior turned to dance to produce the music and visuals for its spring-summer collection, infused with diaphanous, tulle-rich gowns.

The house enlisted the talents of choreographer Sharon Eyal for a sublime and balletic contemporary dance performance that ran throughout the spring-summer show.

It had the star of “Divergent” and “Big Little Lies,” Shailene Woodley, floored.

“You marry dance with fashion and movement and you have a visceral, overwhelming experience,” Woodley told The Associated Press.

The runway hall was spacious enough to house the dozen roving dancers thanks to a marquee constructed in the grounds of the historic Longchamps racecourse, which dates to the 19th century and has been the site of some of former Dior designer John Galliano’s most memorable couture shows.

As ethereal as a layer of tulle, with the corset replaced by a simple tank top.

That’s how the House of Dior described the key idea behind designer Maria Grazia Chiuri’s soft and supple 87-piece show in monochrome and nude.

Few risks were taken in this display.

But this didn’t matter since the fashion, inspired by a dancer’s wardrobe, was primarily aimed at being simple and feminine.

Jumpsuits, straps and cords featured on silhouettes that were either tight on the torso, evoking a leotard, or diaphanous and floaty, channeling a tutu.

There was a softness to the entire show, accentuated by the gentle round shoulders that were set off romantically by dappled and misty lighting.

Following on from Gucci’s May resort show in The Alyscamps, a famed Roman necropolis near Arles, the Milan-based powerhouse continued its year-long love affair with France by hosting its spring show in Paris, exceptionally.

The one-off venue was carefully chosen: Le Palace, the iconic club-turned-theater that was inaugurated in 1978 by Grace Jones who sang La Vie en Rose atop a pink Harley Davidson.

The opportunity to show in this legendary space wasn’t squandered by superlatively flamboyant designer Alessandro Michele.

Actress Salma Hayek stared through opera binoculars at the stage from her balcony seat, as a surreal arthouse film was projected on the stage.

Mid-way through the collection, French-English singer Jane Birkin rose suddenly from one of the seats and began singing, then sat back down.

The colorful and wacky men’s and women’s looks well captured the exuberance of the place dubbed France’s Studio 54. It was once the stomping ground for figures such as Mick Jagger, Andy Warhol and Yves Saint Laurent.

Demonstrating that the collection didn’t take itself too seriously, at one point a model in a gray tuxedo and sneakers strutted out with a real parrot sitting on her shoulder.

DThen, a male model with long ’70s hair in a preppy striped knit sweater walked out with nothing but pink briefs on his bottom half.

This was perhaps the only instance in this indulgent collection, when less was more.

It was a sight to match even Grace Jones.

France’s luxury giant LVMH has told the AP it will revive the iconic fashion house of Jean Patou.

One of France’s most famous couturiers in between the two World Wars, Patou was credited with popularizing the cardigan, inventing the tennis skirt and killing the flapper style. His house was most closely associated with the perfume “Joy,” a rival to Chanel’s No. 5 as one of the world’s most popular fragrances.

For the relaunch, designer Guillaume Henry, who once revived Carven and worked recently at Nina Ricci, has been appointed as artistic director.

It’s the latest in a series of iconic French house relaunches in recent years, including Schiaparelli, Courreges and Poiret.

It was perhaps less fun for the scantily-clad models who braved the cold September weather on the outdoor catwalk in Paris’ Italian Embassy.

Loose silhouettes and large hoopla earrings gave the collection a confident swagger — a little like the 28-year-old wunderkind designer Simon Porte Jacquemus himself.

Oversized pieces of draped fabric that descended from the bust to floor, and giant skirt frills that ran diagonally down the body, provided the collection’s more creative moments.

The show perhaps lacked the feeling of luxury normally associated with the Paris catwalks, but it felt fresh and youthful. MKH