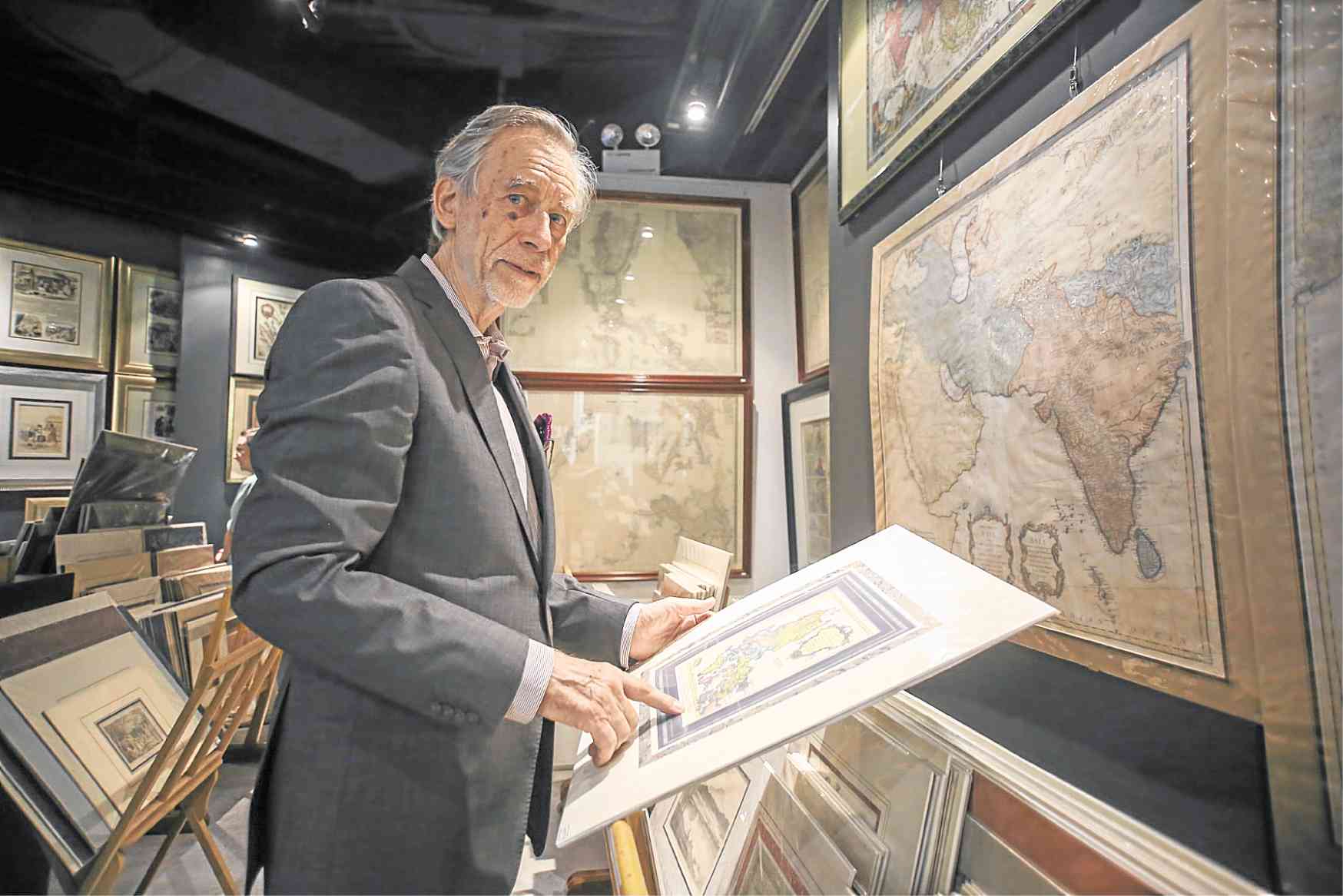 Even in the age of the internet, people want to see the real thing, says Rudolf Lietz. —PHOTO BY EARVIN PERIAS

Until some years ago, few Filipinos other than historians and antique map collectors knew about it. All that has changed since the map became a key piece of evidence cementing the Philippine claim on Scarborough Shoal (clearly shown on the map as “Panacot”).

Only 14 copies of the Murillo Velarde map are known to exist in the world, four of which are in the Philippines. One, previously owned by Ferdinand Marcos, is now at Malacañang Museum. Two are in private collections.

The last one fetched nearly P13 million in 2014, when it went on auction in London, and was snatched up by Filipino tech entrepreneur Mel Velarde. In the remote chance that another copy is discovered, it would likely fetch many times that amount.

This October, in a once-in-a-lifetime event, three of these precious original artifacts will be exhibited in the same room when the International Map Collectors’ Society (IMCoS) holds its 36th annual symposium at the Ayala Museum.

In a language familiar to map nerds all over the world, the symposium is called “Insulae Indiae Orientalis,” a reference to a time when explorers thought of Southeast Asia as the East Indies.

Also to be exhibited in the Murillo Room are specimens of the lesser-known second edition of the Murillo Velarde map, published in 1744, which lacks the distinctive vignettes of Philippine life that border the first edition, as well as other rare Philippine maps.

This is the first time this kind of international meeting will be held in the country, and a huge deal—if you’re into old maps. Apart from the exhibit of vintage maps, many never seen before in the Philippines, the symposium will feature lectures by local and international academics and experts on all things cartographical.

“I’ve worked 10 years to get them to the Philippines,” says Rudolf Lietz, the Philippines’ representative to IMCoS. He is also one of the cofounders of the Philippine Map Collectors’ Society, which has around 40 members.

Lietz is an “OG”—original German—who has lived in the Philippines for 51 years. He first came here to sell German-made hand tools under the El Toro brand, well-known to old-timers. When the brand was killed off by cheap Chinese-made knock-offs, he stayed on to pursue his real passion.

In 1996, Lietz opened Gallery of Prints, a shop specializing in antique prints, books and maps on the Philippines. Nestled in a quiet corner of Glorietta 4 in Makati, the gallery is the only one of its kind in the country.

“We are offering the connoisseur and collector of art and history of the Philippines and Southeast Asia an unsurpassed inventory of antique prints and maps covering six centuries, a volume and scope that compares favorably with any comparable gallery in Hong Kong or Singapore, and even Europe and the USA,” he says.

“We thought that in the age of the internet, people would be less interested in maps and prints, because everything can be found online,” he adds. “But the exact opposite is the case—people want to see the real thing, put their hands on it, and understand what it is all about.”

The emergence of art auctions has stimulated the growth of interest in antique maps and prints, says Lietz. Collectors discover them as a less expensive alternative to paintings, sculptures or furniture from the Spanish colonial period.

“You can get an antique print for as little as P2,000,” says Lietz. “Of course that means it’s a small item, and not a rare item. On the other end of the scale, you can find something costing hundreds of thousands of pesos because it’s rare and can hardly be found anywhere in the world. These are collector’s items with historical and artistic value, and there is demand for it.”

Apart from their historical significance, old maps are works of graphic art, usually created by many hands. Apart from the cartographer, each map features the work of illustrators, engravers, colorists and printers. They hold a peculiar aesthetic appeal for enthusiasts.

The globalization of the market for art and collectibles has also impinged on antique maps.

Gone are the days when Filipino collectors could pick up rare items of Filipiniana from secondhand book shops and antiquarians for a relative pittance on their travels abroad.

Rare Filipiniana is no longer the exclusive province of local collectors. Now they have to compete with demand from abroad, specially from overseas Filipinos who pay top dollar for items from the Motherland, for examples anything connected to Jose Rizal or his contemporaries.

“One of the first maps I got was from a street pushcart vendor in Florence in 1966,” says cultural heritage advocate and map enthusiast Dr. Jaime Laya.

“I asked if he had anything on the Philippines. He had a map of the Philippines printed in Venice around 1790, and I bought it for $10. Apparently, it’s worth quite a lot now.”

Provided one takes the time to study and research, a lot of information can be unpacked from details of an old map. That, suggests Laya, is part of their appeal.

On the second edition of the Murillo Velarde map, for instance, he points out that a line of text identifying Fr. Murillo Velarde as a member of the Society of Jesus, present in the first edition, has been expunged and replaced with ornamental scrollwork.

This would date this particular map after 1768, when the Jesuits were expelled from the Philippines by a Papal edict, and the rival Augustinians sought to eliminate all references to them.

Curiously, the map retains the vignette of St. Francis Xavier near Mindanao, showing a crab carrying the cross. On his supposed voyage to Mindanao (since debunked by historians), the Jesuit saint was said to have dropped a cross in the sea. A giant crab, the legend goes, surfaced and returned the cross to him.

In support of the symposium, a special exhibit of rare Philippine maps will also be shown at the Ayala Museum Oct. 8-14, and Oct. 18-28.