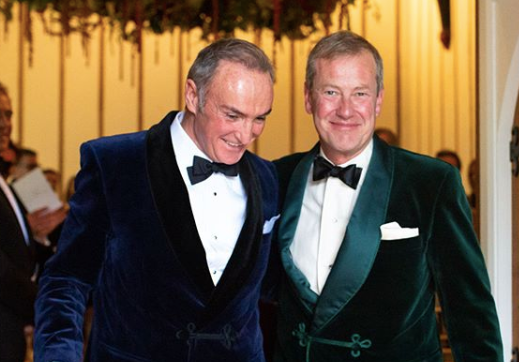 It’s a year of weddings for the British royal family, starting with Prince Harry and Meghan last May. In October, Princess Eugenie, Harry’s cousin, will get married.

But Queen Elizabeth II’s cousin Lord Ivar Mountbatten perhaps had the most historic wedding when he married Scotsman and airline director James Coyle on Saturday, Sept. 22, reports The Daily Mail.

The two grooms both wore matching velvet coats, with Coyle decked in dark blue and Ivar in emerald green.

Both men are in their mid-fifties and met back in 2014 in the Swiss Alps resort Verbier.

Lord Ivar was first married to Penelope Anne Vere Thompson—better known as Lady Penny Mountbatten—back in 1994. They divorced amicably in 2011 and have three daughters, namely Ella, 22, Alix, 20, and Luli, 16.

He came out as bisexual two years ago and has found love and support from his family: his children were behind the idea of having their mother give him away during his big day.

Sixty guests attended the intimate ceremony in a chapel in exclusive country estate Bridwell Park, his and Penny’s former home, which he now uses as an events venue.

Lord Ivar broke tradition in more ways than one: he and Coyle opted for tiers of cheese instead of a cake and requested for donations to the spinal injury charity Regain, instead of gifts.

The couple also chose a gospel choir, a break from the usual solemnity seen in royal weddings such as that of Princes William and Harry. Ivar shared a video of the choir singing on Instagram, as guests danced and clapped to the music.

He also shared pictures from the wedding day and couldn’t contain his happiness in his caption. “Well we did it finally! It was an amazing day despite the miserable British weather.”

“A massive thanks to my 3 gorgeous girls for being so understanding and supportive, without their support this could never have happened! And finally the biggest thank you to James for being just perfect.”

He revealed that his dog Rosie, decked in rainbow shades and a rainbow-colored ribbon, was wiped out after the ceremony.

Though there were no royals in sight, the Queen’s son Prince Edward sent his well-wishes. Lord Ivar is a direct descendant of Queen Victoria and is a great-nephew of Prince Philip’s uncle Earl Louis Mountbatten.

Asked by The Daily Mail why he chose to get married, he said, “I have had the whole marriage thing—and been very happy—but James hasn’t, so I see it as a validation of my love for him.”  Niña V. Guno /ra

Meghan reveals ‘something blue’ she wore at royal wedding