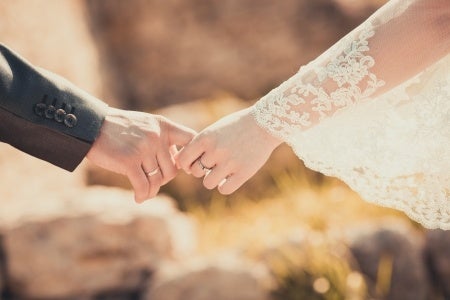 A caterer in a wedding in Ohio saved the day by becoming the man to declare a couple husband and wife.

The one-of-a-kind wedding happened after Kelsey and Andy Schneck, the couple, had a last minute dilemma — the original officiant they hired slipped and broke his ankle during rehearsal night.

“I was pretty much in a state of panic,” the bride was quoted in a KTRK report released Monday, Sept. 24. “I’ve been planning my wedding for an entire year and we’re not going to be able to do it because we have no one who can legally perform weddings.”

Luckily, catering manager Manny Morales was able to come to the rescue. As his company pulled up to deliver the food for the event, the bride asked the driver to hold on for a moment as the officiant might be needed to go to the hospital.

This was where Morales declared to the couple, “I’m an officiant.”

“I thought he was kidding,” Kelsey said in the report.

Morales then committed to officiate the ceremony. But since he is an events coordinator for a popular barbecue chain, he had to ask permission from his bosses to do the gig. Luckily, they allowed him.

The bride expressed how grateful she was to the caterer. “I mean, I would describe him as almost the hero of the wedding, because without him, I don’t know what the outcome would’ve been. He saved our day in every way possible,” she was quoted as saying.

As for the original officiant, he had to have surgery due to his injury. Katrina Hallare/JB

Gov’t employee accused of stealing $1.2M worth of fajitas