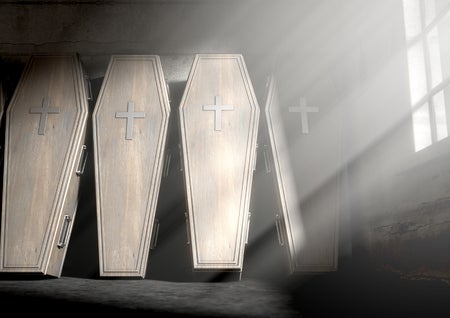 Fearless? Stay for 30 hours inside a coffin, dares amusement park

Have you ever wondered what it’s like to be locked inside a coffin for a whole day?

Six Flags, an amusement park in St. Louis, Missouri, will hold a 30-hour coffin challenge that will surely solve any queries regarding life a la Dracula. In celebration of their “30 Years of Screams” during Fright Fest 2018, Six Flags will choose six “coffin-dwellers” to partake in the challenge.

Of course, the coffin challenge will not be complete without the event’s main attraction — the amusement park will provide coffin-dwellers with “six, deluxe, 2’ x 7,’ slightly used coffins.” The contestants will also be provided with meals, as well as one six-minute bathroom breaks every hour.

To take the horror up a notch, Fright Fest Freaks will be randomly visiting the coffin-dwellers. Should the contestants leave their coffins for any reason other than the designated bathroom breaks, they will automatically be eliminated from the competition.

Just like any other challenges, the best among the contestants will be rewarded. The lucky winner will take home $300 (around P16,200) alongside a variety of the amusement park’s passes and tickets. The most memorable prize, however, is the coffin the coffin-dweller spent 30 hours in — yes, the winner takes home his/her coffin.

Registration for the contest will end on Oct. 3. The six coffin-dwellers will be drawn the next day. JB