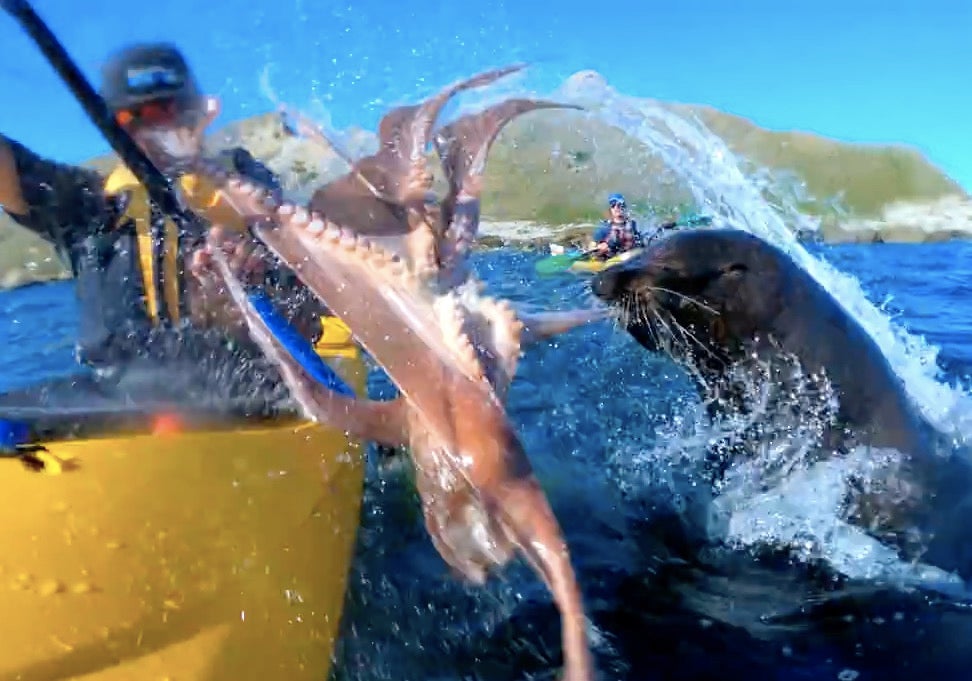 A kayaker paddling with his mates off the coast of New Zealand had the surprise of his life when a seal suddenly slapped him on the face with a live octopus.

Instagram user Taiyo Masuda (@taiyomasuda) first uploaded the footage of his friend Kyle Te Kiwi (@barekiwi) getting slapped on Sept. 24. The two had been on a kayaking tour with a few others off the coast of Kaikoura, New Zealand, when they spotted a seal wrestling with an octopus. The group decided to stop and watch. Not long after Kyle found himself a part of the attraction when the seal swam up near his kayak and burst out of the water to slap him in the face with the octopus using its mouth.

After being used to slap Kyle, the octopus managed to get free from the seal and clung to the kayak for some time. Meanwhile, the seal decided to call it quits and swam off to find a different meal.

Kyle later re-shared the footage on his own Instagram feed while adding his own account of the unusual experience. It turned out he and his friends were trying out their new GoPro Hero 7 Black camera when they decided to go out for a paddle.

Thanks to the hashtags used by Masuda, GoPro also took note of the clip and found it funny enough to share in a Facebook post on Sept. 25.

The seal in the footage was identified as a New Zealand fur seal, according to a report by The Verge. Marine science advisor for the New Zealand Department of Conservation Laura Boren said a large number of fur seals live in Kaikoura, and octopus is one of their favorite meals. The seals would normally come up to the water surface so they could better bite off chunks from an octopus by swinging them around wildly.

In case of Kyle’s slapping incident, it may have been just a miscalculation on the seal’s part that there was a human attached to that long yellow thing floating on the water’s surface. However, a few Facebook users like to comically think the seal had a bone to pick against poor Kyle.  /ra