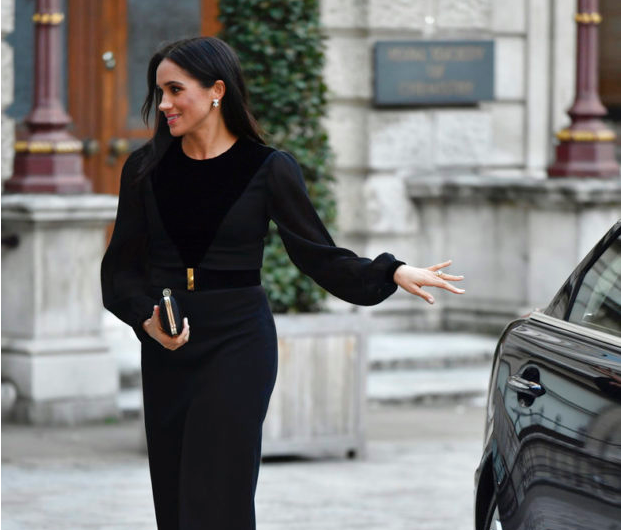 Britain's Meghan, the Duchess of Sussex arrives to attend the opening of 'Oceania' at the Royal Academy of Arts in London, Tuesday, Sept. 25, 2018. 'Oceania' is the first ever major UK exhibition of about 200 works of art spanning over 500 years, from the Oceanic sphere and encompassing the islands in the vast Pacific region. (AP Photo/Arthur Edwards)

Meghan Markle, the Duchess of Sussex, caused a stir among netizens recently when she opted to close her car door herself, with some pointing out that it’s not in line with protocol.

Markle attended the opening of an exhibition titled “Oceania” at the Royal Academy of Arts in London on Tuesday, Sept. 25. This was Markle’s first solo event since becoming a part of the British royal family.

The royal stepped out her car, having her door opened for her, and was welcomed by Lord-Lieutenant of Greater London Sir Kenneth Olisa. After shaking his hand, Markle then closed the door by herself.

While what she did may seem like what any other person would do, her actions became a hot topic on social media as Markle apparently broke royal protocol.

“Usually, if you are a member of the royal family or a dignitary, you have a member of staff to open and close a car door for you,” etiquette expert William Hanson said in an interview with Radio 1 Newsbeat via the BBC.

Meanwhile, Mark Withers (@MarkWithers) made a joke out of the attention Markle was getting for what she did: “What is the world coming to??”

Meghan closed her own door! What is the world coming to??

Still, one YouTube vlogger, Julia Guarin (@JuliaGuarinn), thought it was “totally cool” of Markle to do things by herself, despite the attention.

Everyone is freaking out because Meghan Markle closed her own door…Good thing she has arms and is able to close the door!!!! Plus she is totally used to doing that, is probably even a reflex! I say is totally cool that she closed her door!!!

“Everyone is freaking out because Meghan Markle closed her own door,” the girl said. “Good thing she has arms and is able to close the door!!!” JB