How to swim in the Dead Sea | Lifestyle.INQ ❮ ❯ 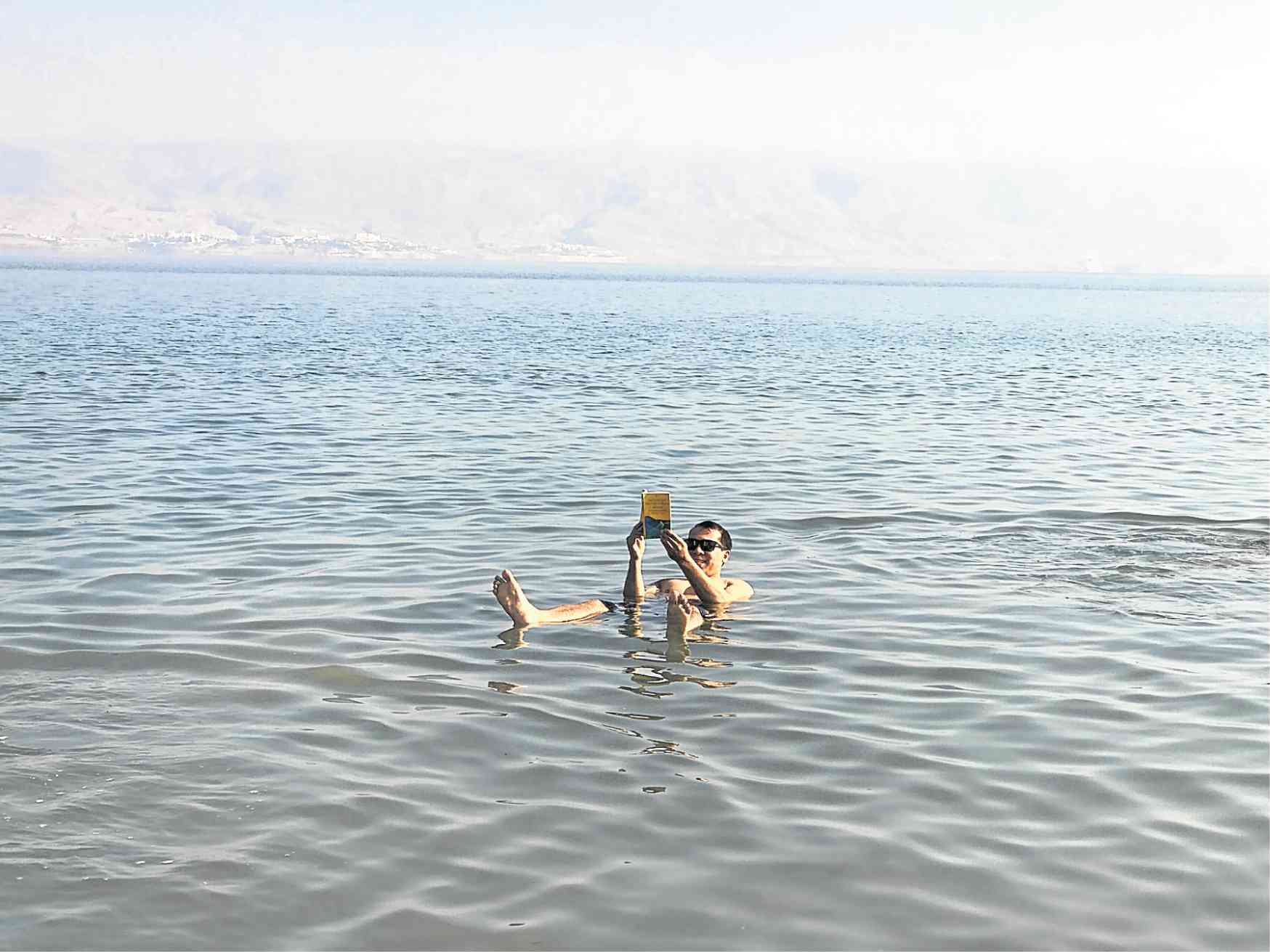 Floating in the Dead Sea with Jordan as backdrop

How to swim in the Dead Sea

Israel—On a recent trip to this Jewish land, I accepted a “winter challenge” to plunge into the chilly—thankfully not frigid—waters of the Dead Sea. It felt good.

Located 430.5 meters below sea level, the Dead Sea surface is the lowest place on earth. It serves as a boundary for three crucial territories in the Middle East—Israel, the contested West Bank and Jordan.

The complex relationship of Jews and Arabs residing around the Dead Sea mirrors, in part, the major events that marked the return of Jews to their homeland after sojourning in Egypt for more than 400 years, the 70 years of Babylonian exile and the eventual establishment of the State of Israel in 1948.

Dead Sea temperatures in January (the coldest time of the year) average 20°C, but can plunge to 14°C at night or early morning. Temperatures slightly adjust upwards in February, before the warmer spring weather sets in around April.

In Israel, floating in the Dead Sea is a must-do, a tradition that is as ancient as the salt lake itself.

(The unusually high salt concentration in the waters of the Dead Sea, which can reach 34 percent—10 times higher salinity than the ocean—qualifies it as a salt lake. Fish and aquatic plants cannot survive in such an inhospitable marine environment.)

Deadsea.com, a travel website advertising every facet of the Dead Sea experience, explains this phenomenon succinctly.

“The extremely high concentration of dissolved mineral salts in the water causes the water to be denser than that of plain freshwater. Since our body weight is lighter (less dense) than the density of the water, our body is more buoyant in the Dead Sea, making it easy to float,” the website explains in its article, “Float in the Dead Sea.”

Deadsea.com describes the salt lake as the “oldest natural spa on Earth.”

Covering your face and body with a mineral-rich black mud before soaking in the water is a must to gain its full health benefits. The black mud has rejuvenating and healing properties.

The trick to a hassle-free floating exercise is to slowly lie on your back, careful not to let the salty water get in your eyes. Bring a book or a newspaper to kill time, as you can’t really swim or dive in the lake.

As you bob on the surface, and if all goes as planned, take a picture or video of that “perfect” Instagram moment.

My eight-day trip to Jerusalem and surrounding regions began as I landed at Ben Gurion International Airport, 19 kilometers southeast of Tel Aviv and 58 km (or about an hour’s drive) from Jerusalem. The main international airport is named after Israel’s first prime minister.

The road trip through largely arid desert landscapes and landlocked bodies of water took me from Tel Aviv, on the eastern coast of the Mediterranean Sea, to the 3,000-year-old Jerusalem that sits on a hill in the Judaean plateau.

The modern city of Tel Aviv is the gateway to an ancient world where history and spirituality, culture and moral codes, myths and reality intersect like roots of a giant tree that has been nourishing the land for millennia.

Tel Aviv and Jerusalem are a study in contrasts.

The former is a mosaic of cafes, theaters, eclectic resto-bars, towering modern buildings alongside multilevel residential houses, and wide roads and highways. Tel Aviv is home to several monuments to Israel’s leaders, patriots and statesmen like its first woman prime minister, Golda Meir, and Yitzhak Rabin, a hero of the Six-Day War in 1967 who later became prime minister and peace advocate.

Israel is the birthplace of Abrahamic faiths, with Jerusalem serving as the spiritual center of the world for Jews, Muslims and Christians alike.

Jerusalem has retained the same character the city has been known for through the ages. For instance, the Old City continues to use its cobblestone alleys that Jesus Christ crisscrossed during his short-lived earthly ministry.

Christians, in particular, view Jerusalem, Bethlehem and Galilee as the triumvirate of the most sacred pilgrimage sites in Israel because of their association with Jesus’ birth, life and ministry.

In between these pilgrims’ sites of great renown are places—surprisingly still called to this day by their ancient names—recorded in the Bible.

Using Jerusalem as my base, and with the aid of online booking apps, I joined full-day tours that brought me to Bethlehem and Jericho—both located in Palestine-administered parts of West Bank—to Qumran along the Dead Sea and the Jordan River, and finally to the panoramic scenery of the Galilee region.

Our first stop on a daylong tour outside of Jerusalem was Bethlehem, a Palestine town in the West Bank where Jesus was born. The 10-km distance between Jerusalem and Bethlehem took less than 30 minutes to traverse.

As the morning mist dissipated, we reached the Shepherds’ Field where, according to the Gospels, the angels declared the birth of Jesus.

To the right of the modest chapel was a metal cross with its back facing a hilly area. Further on the horizon, we could see the contours of a massive West Bank Wall, a security barrier that divides Israel and Palestine.

Before our thoughts got lost in the intractable conflicts that the wall has come to evoke, our tour guide hustled us back into the minibus.

We then motored to the nearby Church of the Nativity and Manger Square. One of the oldest surviving Christian churches in Israel, the church was built on top of a grotto that marked Jesus’ birthplace.

Visitors line up to go down the grotto, a rectangular cave beneath the mosaic-decorated altar. A flight of steps leads directly to the spot where Jesus is believed to have been born. A silver star called the Star of David marks the spot.

Despite the deluge of tourists and pilgrims who visited the church that day, the grotto was bathed in solemnity, with nary anyone raising his or her voice to disturb the peace, as it were.

On our way back to Jerusalem, we spotted the whimsically named Walled Off Hotel, which opened last year in Bethlehem just across from the Israeli security barrier.

Jericho and the Dead Sea

Traveling northward along the western shore of the Dead Sea (to the east of Jerusalem), we reached Jericho, a Palestine enclave in the West Bank. The city is famous for its walls that crumbled during the time of Joshua, who led Israel in its conquest of Canaan following the death of Moses.

To this day, Elijah’s Spring continues to water the thirsty landscape of Jericho. This time, however, faucets have replaced the buckets used to draw water from the Spring.

After taking our lunch in Jericho, we reentered Israel through a highway that led us directly to Qumran.

Located in the Judaean desert, also in the West Bank, Qumran shot to global fame in 1946 when hitherto undisturbed scrolls of the Hebrew Bible and other religious documents were accidentally discovered in some Qumran caves by a shepherd boy.

The caves had been carved out of the side of the mountains facing the Dead Sea by Essenes, an ascetic Jewish sect that existed around the time of Jesus Christ. Scholars believe that the Essenes eschewed worldly existence in favor of an ascetic communal life bereft of material things and other pleasures.

The caves offered them a panoramic, if not haunting, view of the Dead Sea.

From the safety of the minibus, we also got a glimpse of the contested but Israeli-controlled Golan Heights while circling the Sea of Galilee, also known as Lake Gennesaret or Lake Tiberias.

On another tour, we traveled westward from Jerusalem to Tel Aviv, where we picked up other tourists before heading to Galilee. The northern route runs parallel to the Mediterranean Sea, providing us a commanding view of the port city of Haifa, Valley of Armageddon, Mt. Tabor and Cana.