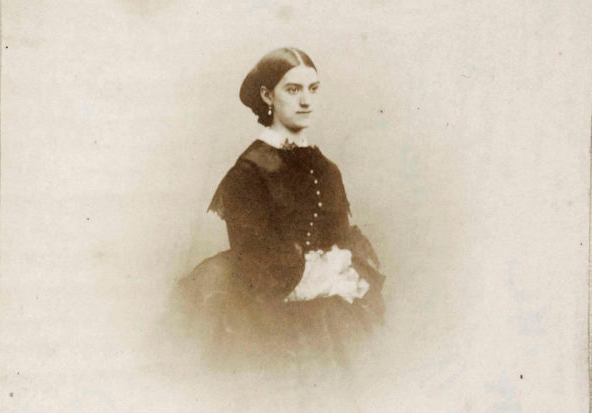 CORRECTS YEAR TO 1866, NOT 1966-This undated photo taken by Nadar and provided by the BNF (Bibilotheque Nationale de France) shows opera dancer Constance Queniaux. She was a courtesan living from subsidies provided by rich men - but preferring the company of women - and ended her life as a very honorable patroness helping orphans. Mademoiselle Constance Queniaux was 34 in 1866 when the French master Gustave Courbet painted her in L’Origine du monde (The Origin of the World), a realistic close up of a woman's naked torso, legs spread and face hidden by a rumpled sheet. French literature expert Claude Schopp found by chance the mention of her name in a letter by French writer Alexandre Dumas fils, the son of The Three Musketeers’ author. (Nadar/BNF via AP)

PARIS — She was a courtesan who relied on financial support from rich men — but preferred the company of women— and died with a reputation as an honorable patroness of orphans.

These are some of the biographical details unearthed by a French scholar who says he has identified the model for a famous 19th century nude painting by artist Gustave Courbet.

Constance Queniaux was 34-year-old in 1866 when the French master painted “L’Origine du monde” (The Origin of the World), French literature expert Claude Schopp said this week. The painting depicts a naked woman lying on her back with her legs spread and her face hidden by a rumpled sheet. The focus of the piece is her genitals.

Schopp said his discovery came by chance when he found Queniaux mentioned in a letter by French writer Alexandre Dumas fils, the son of “The Three Musketeers” author.

The letter said the woman having “the interior” put to canvas by Courbet was Mademoiselle Queniaux “from the opera.” The letter also suggested she was the mistress of an Ottoman diplomat, Halil Serif Pasha, known as Khalil Bey.

Schopp had never heard of her, but immediately made the link with “L’Origine du monde.”

Like a detective, he followed the trail from the last name and profession clues. He concluded she was Constance Queniaux and confirmed the conclusion with the help of France’s national library experts. Original photographs of her were held at the library.

“She had left very few traces, but enough to follow her,” the scholar said.

Queniaux’s name was known to few people at the time — and that’s how the identity of the woman in the painting was hidden for 150 years. The painting, too, remained secret as successive owners were afraid to display it.
Her birth certificate showed she was born in northern France to a single mother who was a textile worker and an unknown father.

At the age of 14, she joined the opera of Paris as an aspiring dancer. The wages were low and ballet dancers needed “protectors” to pay for costumes and classes, Schopp said.

“She’s going to live from men, but she mostly lives with women,” he said.

Queniaux lived for a while within a group of female dancers and comedians, but proved to be “second rank” as a dancer, according to Schopp. She left ballet at age 28 and became the occasional mistress of Khalil Bey.

A very wealthy art collector, he was also a womanizer.

He commissioned two paintings by Courbet, including “L’Origine du monde,” which he kept behind a green curtain for his private viewing pleasure.

“She couldn’t refuse anything to Khalil Bey… and I think that’s when she’s starting her path as a woman growing rich,” Schopp said.

To pay gambling debts, Khalil Bey sold his art collection in 1868. The model for his painting eventually became an aristocratic-like figure.

At the end of her life, Queniaux’s courtesan past was almost erased. She had a rich social life, owned a seaside villa in a Normandy and dedicated her days to helping orphans, poor artists’ children and disabled people.
Queniaux never married and had no children.

“Her testament obviously shows a great affection for her housemaid, so it seems she felt a special tenderness for her but I wouldn’t go further,” Schopp said.

She passed away in 1908. The sale of her assets showed she owned a beautiful painting from Courbet: a bouquet of flowers.

“L’Origine du monde” was donated to the Orsay Museum in Paris in 1995. MKH

‘Nude Sunbathing’ by Roy Lichtenstein to be auctioned by Sotheby’s

Playboy names first Playmate of the Year in post-nude era