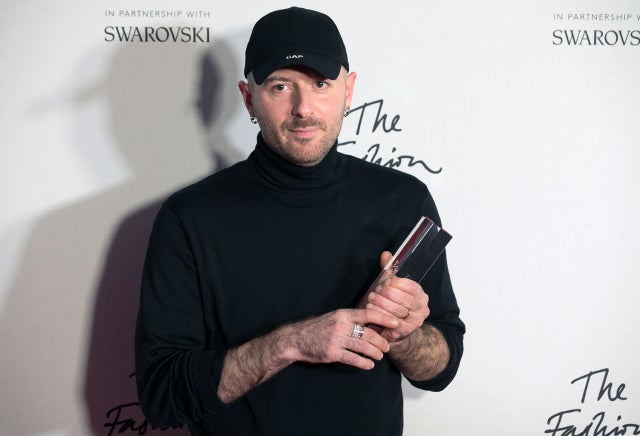 For wunderkind designer Demna Gvasalia the search for glamour leads through his worst nightmares, with the Georgia-born creator projecting the trauma of his past onto Balenciaga's Paris fashion week show. Image: AFP/Daniel Leal-Olivas

For wunderkind designer Demna Gvasalia the search for glamour leads through his worst nightmares, with the Georgia-born creator projecting the trauma of his past onto Balenciaga’s Paris fashion week show.

Models — in square-shouldered jackets and tight mini dresses — walked through a curved mirrored tunnel of floor-to-ceiling LED screens in a film studio outside the French capital Sunday that swept fashionistas into a disturbing twilight zone.

John Rafman, the Canadian artist and filmmaker known for his work on the impact of technology on the human psyche, directed the video, which began with the sudden appearance of the “blue screen of death.”

The terminal error message created a feeling of panic.

“I’m using this show to reveal everything that has troubled me in my past,” Gvasalia told AFP. “Look what is happening around us. My work is the mirror of my soul.”

The enfant terrible of Paris fashion achieved notoriety with his $2,000 “Ikea” bag — a luxury leather version of the 99 cent original — and has created a poverty chic aesthetic that has been widely copied.

The 37-year old designer, who divides his time between Paris and Zurich, was born in Sukhumi, in the Abkhazia region of the then-Soviet Republic of Georgia.

During the 1990s, following the break up of the USSR, Gvasalia fled the ethnic cleansing of Georgians by Abkhaz separatists, journeying across the Caucasus mountains with his mother and grandmother.

Abandoning their car, and in desperation selling an AK47 they had to protect themselves so they could put Gvasalia’s elderly grandmother on a horse, the family eventually arrived in Germany, via Ukraine and Russia.

Although he turned his back on a prospective career in banking in order to devote himself to fashion, Gvasalia’s philosophy remains businesslike.

“We think hard about what people would like to wear,” he says. “It’s a luxury product, it costs a lot of money, so we try to do the maximum intellectual work before designing our collections.”

For spring-summer 2019, his Balenciaga collection took on the spirit of the eighties: a shirt jacket, matching fluid pants, square shoulders with flowing or exaggerated raglan cuts.

The fashion house is also revisiting its tailoring by using new 3D scanning and printing techniques in its jackets and coats for women and men.

“The design has to be attractive to someone who does not like Bond Street or Savile Row,” Gvasalia says. “For me, this is very important.”

“Elegance and glamour are almost taboos today,” he says. “It’s in this context that I want to reinterpret them.” CC