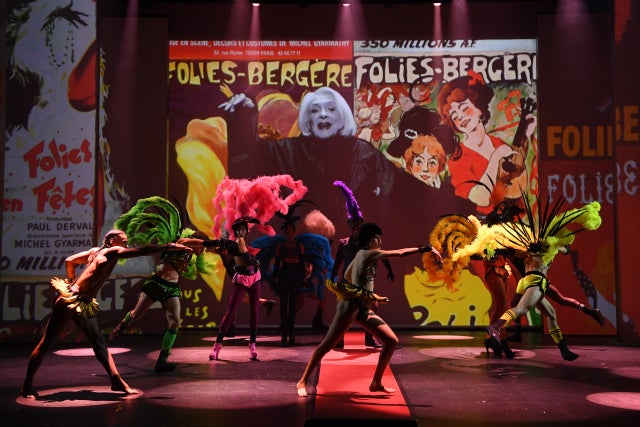 “I was weaned on musicals … totally transfixed by the plumes and the paste jewels. I told myself that one day I would stage a revue,” Jean Paul Gaultier said of a childhood dream that has now taken shape at the Folies Bergeres, a landmark Parisian theater.

“The Fashion Freak Show”, which opens to the public next week, traces the journey of the enfant terrible of French couture from his humble origins in a Paris suburb to international stardom.

The 66-year-old began his career as an assistant with Pierre Cardin and a path-breaking trail followed that introduced man skirts, older men, fuller women and heavily tattooed models to the runway and the iconic cone bra immortalized by pop diva Madonna.

“I have always loved freaks, strange people, troublemakers, aesthetics which blend and unexpected encounters like when the boy from the streets consorts with the duchess,” Gaultier said.

The spectacle showcases 200 of his creations and begins with “Nana”, Gaultier’s childhood teddy bear for whom he made a conical bra when he was just five.

It shows a young Jean Paul being regularly punished in school for drawing gowns in the classroom and goes on to his stint at Cardin, his first collection and his inspirations and muses, including Kylie Minogue, Madonna and Pedro Almodovar.

Boasting colors screaming Florida and enlivened by energetic disco beats, the revue also showcases the quirky collections of the bad boy of fashion over the years such as his corset dresses and the Perfecto gown.

Gaultier’s life is laid bare with scenes from a gay cruising club and a moving moment when his lover and business partner Francis Menuge dies of AIDS.

The show brings together about 15 actors and dancers playing personalities who are “almost naked, tottering on high heels, generously proportioned and either wearing underpants or not,” Gaultier said.

The designer, whose signature attire is a striped Breton jersey, has an important message for the audience at the end.

“Fashion is superficial. Have Fun! Be Free!” CC