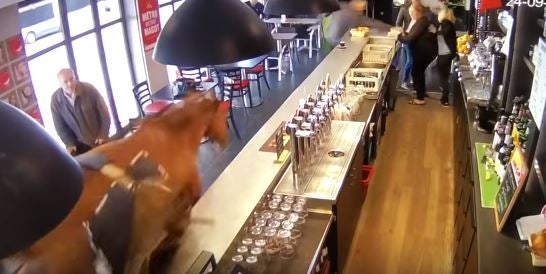 Horse walks — storms, rather — into French bar after escaping stables

What used to be just a joke about a horse walking into a bar has materialized in real life, and it seems just as funny, if not absurd. One horse disrupted the order of things in a betting bar in Chantilly, Paris when it rampaged inside the establishment one fine morning, sending its patrons running in fear as the horse wildly jerked around.

The horse was discovered to be a race horse who escaped from its stables in a training facility just a kilometer away from the bar, according to French newspaper Ouest France last Sept. 30. As per witnesses, they didn’t think the horse would be able to enter, but it pushed the door to let itself in.

“She came in, pushing the door,” a certain Stéphane Jasmin was quoted as saying. “She raced all the way to the PMU corner. Then the filly turned around breaking a table and chairs.”

Meanwhile the horse’s trainer, Jean-Marie Béguigné, shared that the horse escaped after its rider fell.

“Between the track and the stables, his rider fell,” Béguigné said in the report. “The filly escaped by going on the road, crossing a roundabout before entering this bar…”

Béguigné added that this particular horse had a “penchant for escape.”

“She was distraught and made a decision contrary to its nature,” he explained.

The hoofed subversive has since been caught in a parking lot after its momentary excursion to the bar, sustaining no trauma or anxiety. Patrons, too, were unhurt.

The video of the horse’s surprise visit may be viewed below. JB