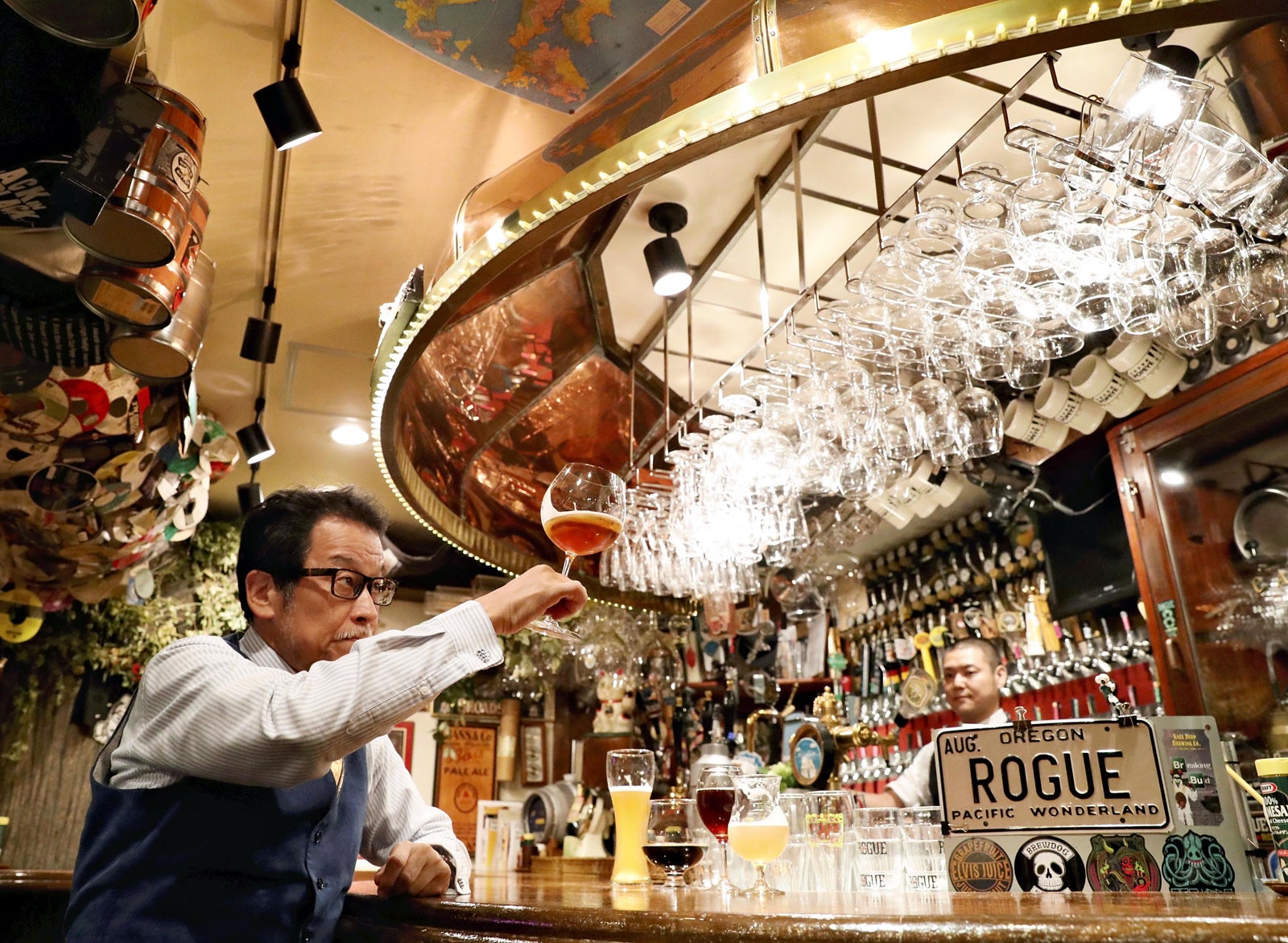 Hiroyuki Fujiwara examines a beer in a glass at Beer Club Popeye, a bar in Sumida Ward, Tokyo.

Japan’s craft beer a treat for all the senses

TOKYO — Bars specializing in craft beers are brewing up a growing following as people seek out distinctive beverages that are a treat for the five senses.

Some of these establishments have devised creative ways to drink these beers and fully bring out their unique flavors and aromas. These lengthening autumn nights are ideal for savoring carefully crafted beers.The bar Beer Club Popeye in Sumida Ward, Tokyo, is considered “hallowed ground” among craft beer aficionados. An impressive lineup of beer taps blanket the wall behind the counter, and more than 70 kinds of beer are available at any one time.

According to Hiroyuki Fujiwara, head of the Japan Beer Journalists Association, a craft beer is an original beer usually made in small volumes, rather than those mass-produced by major breweries.

“In the past several years, the range of beer flavors and aromas has expanded,” Fujiwara said. “At Popeye, the staffers select the glass best suited to the characteristics of each beer so customers can fully enjoy the delicious taste.”

Popeye has about 20 differently shaped glasses on hand. Lagers, which are brewed with yeast fermented at relatively cool temperatures, have a refreshing taste, so serving them in a tall, slender glass will provide a kick as they go down. Ales are fermented at room temperature and have a distinctive aroma. Serving ale in a wide-mouth tulip glass — but only up to about halfway — will enhance the rich aroma.

“Beer has a diverse array of elements to enjoy, including flavor, aroma, color and level of carbonation. There’s more to it than you might expect,” said Hirotaka Kido, Popeye’s manager.

Craft beers have been spreading in Japan since 1994, when a Liquor Tax Law revision significantly reduced the annual minimum beer production volume required for a brewing license to 60 kiloliters. This opened the door for small beer producers. These products were initially called “local beers,” and despite attracting some attention their popularity did not really take off. They came back into the spotlight about five years ago when they became known as “craft beers.” Beer produced by small breweries boomed around the world, in countries such as the United States, and Japanese beers also earned a good reputation overseas.

“In Japan, there is an ingrained view that beer is a drink to be chilled and give a feeling of refreshment,” Fujiwara said. “But now that there are more high-quality craft beers, a culture of slowly savoring the taste is finally spreading.”

A craft beer gets its unique flavor from subtle changes in the brewing method and the blend of ingredients used. This year, tongues have been wagging over craft beers that use fresh hops — freshly harvested, domestically grown hops.

Beer brewers conventionally use dried hops, but freshly picked hops add a fresh aroma. These beers are available only for a limited time. “Fresh Hop Fest. 2018” is being held at specialty establishments across the nation until Oct. 28. For more information, see https://freshhop.jp.

“A brewer pours their heart and soul into a craft beer. I hope people will try various craft beers and find ones they like,” Fujiwara said.

A drink for any course

At Spring Valley Brewery Tokyo in Shibuya Ward, Tokyo, a “pairing set” containing six craft beers and snacks matched to their respective flavors is a popular item on the menu. The set costs ¥2,300.

Fujiwara said, “It might sound surprising, but beer goes with any food — from appetizers to desserts.”

For example, dark beers are a good match with chocolate cake. According to Fujiwara, the richness and bitterness of the dark beers goes well with the dense sweetness of the chocolate.