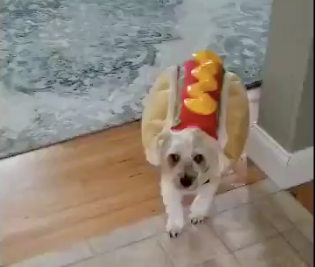 Brooklyn, a dog in Minneapolis, Minnesota, is set to be the hottest dog on Halloween as he modeled his costume in a video shared on Twitter last Saturday, Sept. 29,

“Brooklyn trying on his Halloween costume,” she tweeted.

The costume is a hot dog with a bun and condiments including mustard and relish. JB