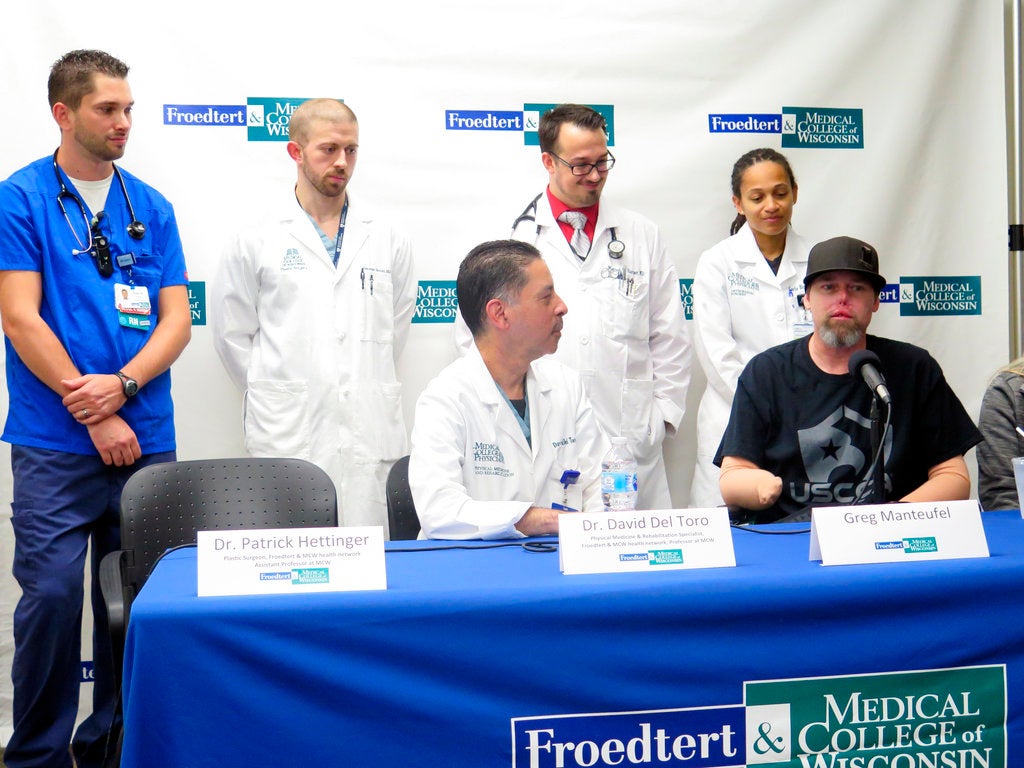 Greg Manteufel, right, sits surrounded by the medical staff at Froedtert & the Medical College of Wisconsin on Tuesday, Oct.2, 2018, in Milwaukee, to talk about his recovery from a rare blood infection that led to the amputation of part of his forearms and legs. Doctors say the blood infection was caused by dog saliva. (AP Photo/Ivan Moreno)

MILWAUKEE (AP) — A Wisconsin man who lost his hands, feet and parts of his arms and legs to a rare blood infection transmitted by dog saliva was praised by his doctors Tuesday for his positive outlook and determination to walk again with prosthetics.

Greg Manteufel, 48, was discharged two weeks ago from the Froedtert & the Medical College of Wisconsin in Milwaukee. Since late June, he has undergone at least 10 surgeries during which surgeons amputated parts of each of his limbs because circulation to his extremities shut down due to the infection.

“Through all of this, the real star of the show is Greg. He’s had the most positive attitude of any patient I have ever met and he’s approached this with a fight that I don’t think I’ve seen in any patient,” Dr. Patrick Hettinger, a plastic surgeon, said during a news conference about Manteufel’s recovery.

Manteufel, who worked as a house painter before his illness, started feeling sick on June 26, with a fever and pain and his legs. When he was eventually taken to the hospital, doctors found he had contracted a rare blood infection caused by capnocytophaga (cap-noh-seye-TOF’-ah-gah) bacteria that are commonly found in the saliva of cats and dogs and that almost never lead to people getting sick.

Manteufel has a dog, but doctors don’t know if it was his pet or another dog that gave him the infection.

“I just couldn’t believe it,” Manteufel told reporters. “I’ve been around dogs my whole life. It’s hard to take, you know?”

Manteufel’s horrific ordeal hasn’t changed his love of dogs. His wife, Dawn Manteufel, said one of the first things their dog did when her husband returned home was snuggle up with him to watch the Green Bay Packers.

According to the U.S. Centers for Disease Control and Prevention, up to 74 percent of dogs and up to 57 percent of cats carry capnocytophaga. People also have a different strain of the same bacteria in their mouths.

The CDC doesn’t track the number of infections from capnocytophaga because they’re so rare.

Manteufel still has a long way to go with his recovery. The loss of circulation that cost him part of his limbs also almost took his nose and upper lip and will require reconstructive surgery in stages over the next year, Hettinger said.

His prosthetics also will be fitted in stages as his skin and wounds begin to heal, said Dr. David Del Toro, physical medicine and rehabilitation specialist at the hospital.

Manteufel said his main goal is to walk and drive again “so I can get back on with life, not just be stuck somewhere.”

Del Toro said he has no doubt he’ll achieve that.

“No one has the determination of Greg. I believe he’s going to achieve all his goals, it’s just going to take a long journey,” Del Toro said. NVG