WATCH: Woman in US defends Hispanics from racist harassing them in a store | Inquirer Lifestyle 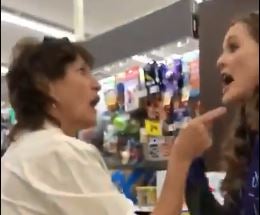 WATCH: Woman in US defends Hispanics from racist harassing them in a store

The confrontation happened at a grocery store in Rifle, Colorado last Oct. 1, according to Buzzfeed News today, Oct. 3. The two Hispanic women were identified as Fabiola Velasquez and Isabel Marin, while the woman who uttered racist slurs is known as Linda Dwire. The good samaritan who came to Valesquez’s and Marin’s defense was identified as Kamira Trent.

The video of the confrontation made the rounds on Twitter last Oct. 3 when it was re-shared by a netizen (@_SJ_Peace).

“2 Hispanic women were approached and verbally assaulted by a racist white lady for speaking Spanish in store,” wrote the netizen. “Another white woman who saw and heard this happening immediately stepped in to defend them. SHERO! WE NEED MORE OF THIS! SEE SOMETHING SAY SOMETHING!”

In the video, Trent can be seen yelling at the racist Dwire, “You don’t harass people! Get out of here! Now!” She didn’t back down as she continued on, telling Dwire to leave or else she’s calling the cops.

“I’m calling the cops. You leave these women alone. Get out! Go!”

2 Hispanic women were approached and verbally assaulted by a racist white lady for speaking Spanish in store.

Another white woman who saw and heard this happening immediately stepped in to defend them.

WE NEED MORE OF THIS! SEE SOMETHING SAY SOMETHING!

Dwire tried to interrupt her, saying, “You come from a generation that’s destroying this country —” but was immediately cut off.

“Uh uh! No, I do not. I have respect and it does not matter,” Trent retorted. “You don’t harass people like this. You need to leave.”

Trent then escorted the Dwire down the aisle, where they took the matter outside.

One of the Hispanic women, Velasquez, took to Facebook (Faby VelSa) on Oct. 1, where she posted the video and narrated what happened. She shared that she and her friend were just talking inside a shop when Dwire came up and insulted them after hearing them talking in Spanish.

As per Velasquez, the racist woman told them that if they live in America, then they should speak English and not Spanish.

It’s reported that Trent followed up on her word, as Dwire has since been arrested and taken to Garfield County Jail. She is charged with two counts of bias-motivated harassment, but was released on bond. Meanwhile, Trent’s Facebook continues to be flooded with thank you comments from people the world over. Cody Cepeda/JB