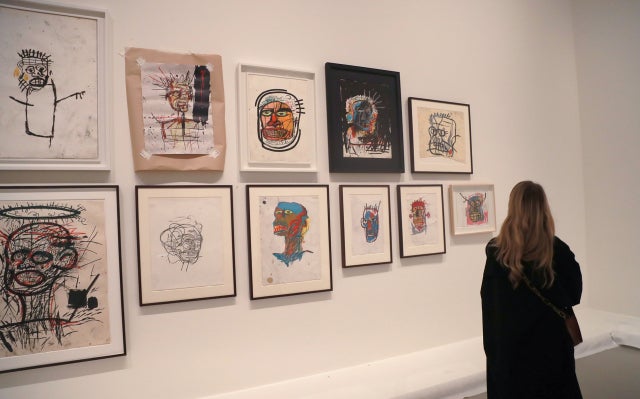 A visitor looks at artworks by US artist Jean-Michel Basquiat entitled "Zydeco" and "Discography" (R) during a press visit at the Fondation Louis Vuitton in Paris on September 26, 2018. Image: AFP/Jacques Demarthon

Although the black New Yorker who began as a graffiti artist and the early 20th-century Viennese painter came from very different worlds and eras, both lived hard, died young and battled their demons on canvas.

“Their gaze goes right through us,” said Suzanne Page, the director of the Foundation Louis Vuitton staging both retrospectives.

The heads and bodies they painted show “the human being from the interior to the exterior,” Page told AFP.

“Both were prolific and had protean talent, both were on missions which went beyond them, both worked in deep waters,” she said.

Basquiat, who came from a mixed Haitian and Puerto Rican family, is now the most expensive American painter ever, with one of his skull paintings selling for $110.5 million (95 million euros) in New York last year.

It also holds the record price for an artwork created anywhere since 1980.

That canvas, “Untitled”, was bought by the former Japanese pop star and internet tycoon Yusaku Maezawa and is part of the Paris show of some 100 of his works.

A square in the French capital was also named after Basquiat last weekend.

And on Tuesday night at the show’s private view, Hollywood star Owen Wilson rubbed shoulders with footballer David Beckham and the painter’s family.

Such is the demand for his work that one-fifth of the 100 most expensive paintings sold at auction in the last year have been Basquiats, according to the Artprice index.

Basquiat died aged 27 of a drug overdose in 1988 after eight years of intense creativity after Andy Warhol spotted his poetic, provocative and humorous tags.

He had begun with an aerosol can in his native Brooklyn and lower Manhattan as part of a duo called SAMO — their slang term for “the same old shit” of American society that they denounced.

Like Schiele he quit school early, and curator Dieter Buchhart said they also both shared a sharp “existential” line.

Although Basquiat has come to be seen as a penniless street artist raging against racism, the artist who gets regularly name-checked by rappers such as Jay-Z actually came from a well-off family and went to an expensive private school.

He was trilingual in Spanish, French and English by the age of four and had haunted the Big Apple’s museums with his mother from an equally early age.

It was she who also gave him the anatomy book after he was knocked down by a car at age eight that would become the motor for his imagination, Page said.

“He was enormously cultured, high and low, taking in everything. Young people from all cultures really identify with that,” she said. “Basquiat never lost contact with the street and mixed the two up.”

Schiele — also known for his raw, unsparing self-portraits — lived a year longer than Basquiat, dying at 28 during the Spanish flu pandemic that was sweeping a war-weakened Europe.

The raw sexuality of his work and his focus on sex and death made him notorious and landed him in prison condemned as a pornographer.

His wife Edith, who was pregnant, died three days before him also of the disease, and his final works were sketches of her.

Basquiat too “hardly had time to live,” French art critic Christian Noorbergen told AFP. “But he challenged art in every way, raging against racism and all the conformities that crushed real life.

“His assault on cultural barriers was staggering, scary and sublime,” he added.

The shows, which are being staged separately at the Foundation Louis Vuitton, run until January 14. CC