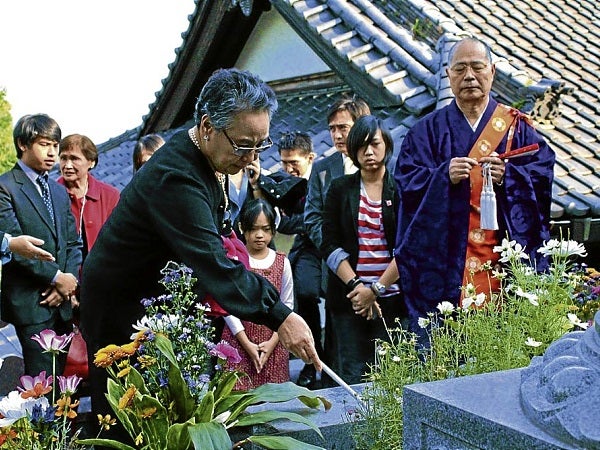 How the Filipino hero found his samurai wife in Yokohama

July 1898. It was a beautiful warm evening in Yokohama, Japan. Two shadowy figures were slowly and silently going down the steep hill, careful not to awaken the samurai guards.

It was the distinguished Filipino guest, representing the First Philippine Republic, and a young Japanese woman dressed in a dark kimono. The latter was clutching a small silk bundle and two prized possessions: her sword and a kozuka or a hara-kiri knife. She was afraid her family might awaken.

The news of her eloping with a non-samurai man would surely make her father furious. She closed her eyes, imagining her father shouting hurtful words, disowning her and cutting her off from her family forever.

This was how I imagined my great grandparents, the Philippine national hero Mariano Ponce, and a samurai descendant, Okiyo Udagawa, left their home in Yokohama many years ago.

Since then, their story has intrigued many of us in the family. We researched their lives years after coming back to Philippine shores. “Naning” and “Kiyo,” as many knew them, already had two children, Pedro and Carmen (born in Japan and Hong Kong) and lived in Baliwag, Bulacan.

Noted for his written works and contribution to the Philippine Revolution, Naning became the director of “El Renacimiento” and joined the Nacionalista Partido. He was later elected assemblyman for the Second District of Bulacan.

Kiyo embraced Christianity and was baptized by Rev. Fr. Benito Cebrero. She had two more children, Conching and Mary. Respected by everyone, she was a foreigner who readily traded her kimono for the baro’t saya. She became a heroine in her own right when she protected many Filipino soldiers and the Catholic clergy during the war with Japan.

We wanted to learn more about our Japanese heritage. Nobody seemed to know anything about our great grandmother Kiyo’s clan, or how or where they lived in Yokohama.

My grandmother Mary Ponce, Naning’s youngest daughter, visited Japan in 1960. Accompanied by my mother Linda Cruz (who was at that time living in Tokyo), she went to the public records office in Yokohama and tried searching for her family’s history. The local newspapers even picked up their story, hoping that family members might see the article and come forward and introduce themselves. To her disappointment, no one did.

More than 40 years later, in 2007, the National Historical Institute, through the office of their Chairman, the Honorable Ambeth Ocampo, invited our family to a meeting regarding a proposed historical marker for my great grandfather in Yokohama, Kanagawa, Japan.

Also in the meeting were chair Noboru Ninomiya, the vice chair Chikako Shirane of the Yokohama Manila Sister City Friendship Committee, who both came to Manila to meet the families of Mariano Ponce and Artemio Ricarte, a Filipino general during the Philippine Revolution.

Though the historical marker never materialized, it was the beginning of our family’s friendship with Mr. Ninomiya. We expressed our desire to trace our roots, and he seemed genuinely interested.

It took another four years before we had contact with the Yokohama Manila Sister City Friendship Committee. They came for another visit and told us about their planned exhibit featuring our great grandfather Mariano Ponce.

They also brought a researcher, Hatsue Uchida, who discovered many things about our ancestors. Through her, we discovered that Kiyo’s father and mother were Tsurukichi Udagawa and Tome Rikiishi. With the help of the monks in a nearby temple, she also found the approximate area of Naning and Kiyo’s residence, even after zoning changes were made.

With Uchida’s discovery and Ninomiya’s genuine invitation to Yokohama, the family finally made the historic journey to Japan.

Fall in Tokyo was beautiful. The weather was cool and the trees were turning gold and amber.  There were 20 of us: my mother, Naning and Kiyo’s granddaughter, her family and her older brother Nitoy’s (deceased) family led by the latter’s eldest son Lito Gonzalez.

Though my parents lived in a small house in Omotesando for six years as newlyweds, they were just as excited to “come home” as their grandchildren were.

My dad, who speaks Japanese, was our guide. He lived in Japan when his father, Lt. Gen. Pelagio Cruz, was appointed Chief of the Reparations Commission to Japan after he retired as Chief of Staff of the Armed Forces in 1962.

On Nov. 4, we all boarded the train to Yokohama and were warmly welcomed by Ninomiya, his assistant Beni Takasaki, his research staff, and daughters. The venue for the event was on the third floor of the Sogo Department Store.

My cousin Lito Gonzalez and I were introduced as the family’s representatives as we cut the ribbon and opened the exhibit. Ninomiya was the first to speak, and he formally welcomed us and thanked his team of researchers for making the event possible.

Ambassador Lopez excitedly spoke about my great grandfather Mariano Ponce and about his life in Yokohama when Emilio Aguinaldo selected him as the representative of the First Republic of Japan.

When they called my name to speak, I couldn’t help but feel a bit emotional. Here was an event so far from home, where foreign people were honoring my ancestors. I felt humbled and proud at the same time. Without this committee, my mother would have remained clueless about these wonderful discoveries about her family.

At around 11 a.m., the family was invited to the temple in the suburbs. Here, the Buddhist Priest accompanied all of us to go up the hilly side of the village. We passed several homes and a small cemetery until we reached a high area. Here, he pointed to us where our great grandparents Naning and Kiyo resided after they got married, and before returning to the Philippines in 1907.

For the first time, we found the address of their home: 637 Myokoji-san, Nakaku, Yokohama-shi.

The next stop was a park where a small golf course used to be. If I remember right, I saw an old picture of my great grandfather with a golf club resting with his friends under a huge tree in a similar place. I never felt so extraordinarily close to my ancestors.

Upon reaching the temple, we were ushered inside the inner chamber. Red silken drapes hung low all around the room. We were instructed to leave our shoes outside and walk barefoot on the red carpet. There were gold trimmings everywhere. But what caught my eye were the long shafts of wood with Japanese inscriptions on it. One of them was engraved with the name: Mariano Ponce Family.

Then the lead priest entered the room accompanied by two younger priests. They started with their prayer, chanting in Japanese. The younger ones started hitting the drums rhythmically with huge wooden sticks. The prayer lasted for at least 30 minutes.

Then the main priest asked my cousin Lito and I to approach the altar and to bow as we touched the ashes in a small bowl. Every one of us in the family was asked to do this one by one.

Outside the temple, the priest gave me a wooden dipper as I stood in front of a grave-like monument and was asked to pour water on the potted plants and flowers that surrounded it. All of us were asked to do this. To this day none of us can understand what that ritual was for.

After the whole ceremony, the priest’s wife ushered all of us into a big tatami room where she prepared nice bento boxed lunches and hot tea for everyone. That was, for me, the most authentic Japanese meal I ever tasted.

The extraordinary day ended at around 5 pm. On our train ride back to Tokyo, I simply noticed how we were quiet and smiling with happiness. It’s not everyday that you discover something unique about your family, right?

Nowadays, every time I come up with brave ideas in my job as a copywriter, I just think that maybe I inherited the rebel side of my great grandfather. After all, he was one of the founders of La Solidaridad. But I wish the skills of my great grandmother will somehow manifest in my life, or someday, in the lives of my children.