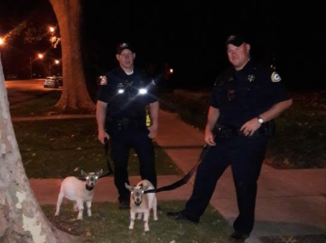 Officers were called to break up a fight between two juvenile goats in Utah, United States on Oct. 2 according to a Facebook post shared by Provo Police Department.

The department shared images of two of its officers posing with the offending goats, after receiving a call at around 10 p.m. about the sparring animals.

According to the post, three witnesses performed a “citizen/goat arrest” on the pair, keeping them at bay until police arrived at the scene.

Despite not having a “department approved goat restraint system,” Officer Brian Wortman was able to think fast, and used leg restraints to hold the animals until an animal control officer came to diffuse the situation. JB

Cat whisperers, attention: Get paid to cuddle cats on a secluded Greek island