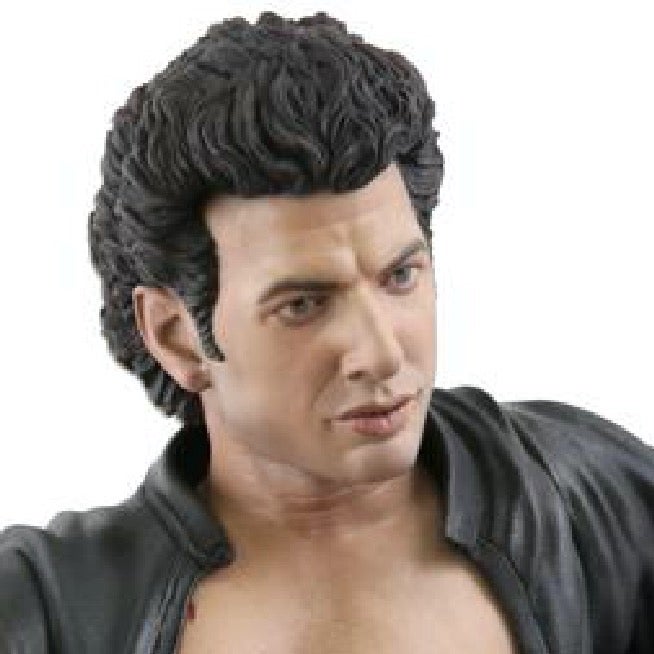 A half-naked Jeff Goldblum could be the latest addition to a collector’s shelf with this 10-inch figure of “Jurassic Park’s” Dr. Ian Malcolm.

The 1/4″ scale figure re-creates the movie scene wherein Malcolm lounged on a table with the front of his shirt open while he rested an injured leg. The figure follows the likeness of a younger Jeff Goldblum with a thick lock of hair before he became the eccentric Grandmaster in “Thor: Ragnarok.”

The statue measures 10 inches tall and has an 18-inch diameter base. The base itself is stylized with dinosaur fossils, including the movie’s iconic Tyrannosaurus Rex.

The collectible will be a limited edition item from Chronicle Collectibles, which specializes in re-creating iconic movie figures using polyresin into collectible sculptures.

The company also created a 1/4″ scale figure Dr. Alan Grant holding a flare as he tried to lure the T-Rex in the rain in one of the movie’s scenes.

The 10-inch tall Jeff Goldblum is now available for pre-order, but collectors may need to think hard if they want him for their collection since the statue costs $599 (about P32,482).

Earlier in July, a bigger version of this iconic scene was re-created using a 25-foot-tall statue, which was in front of the London Tower Bridge, as a marketing stunt. United Kingdom streaming service Now TV used the statue to promote the addition of “Jurassic Park” to its movie lineup.  /ra