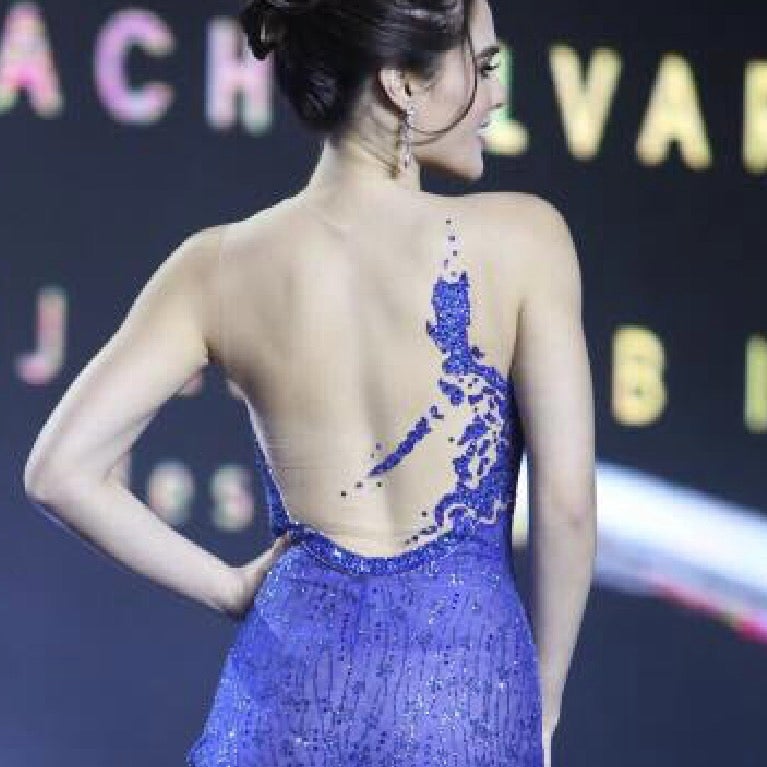 From the imagination of designer Benj Leguiab IV, the studded cobalt blue strapless gown tightly hugged Alvarez’s figure to accentuate her curves. The gown spreads out to a wide base from the knee down.

However, its most prominent feature could be found in the back, where the Philippine archipelago has been recreated in detail.

A snapshot of the gown worn by Alvarez during the Oct. 7 Miss World Philippines 2018 coronation night at the Mall of Asia Arena was shared on the organization’s Facebook page on Oct. 8.

The post has since been shared over 27,000 times, as of this writing. Facebook users also expressed their admiration for the dress through the over 1,200 comments. Some of the commenters mentioned how Alvarez should have been given the Best in Long Gown award for Leguiab’s patriotic creation.

Lequiab himself left a comment to thank those who appreciated his work. His comment became the top post in the thread, raking in over 3,900 reactions and over 100 replies.

The designer mentioned on an Oct. 8 Facebook post that it was “One of my best gown I ever made.”

Alvarez also gave a shoutout to Lequiab on an Oct. 8 tweet and FB post for dressing her in the eye-catching, beautiful blue gown. The buzz created by her lovely dress may just raise her chances in the Reina Hispanoamericana pageant, where she will be sent to represent the Philippines.

Meanwhile, Filipino-American Katarina Sonja Rodriguez won the biggest title of the night, and will represent the country at the upcoming Miss World 2018 in Sanya, China. JB