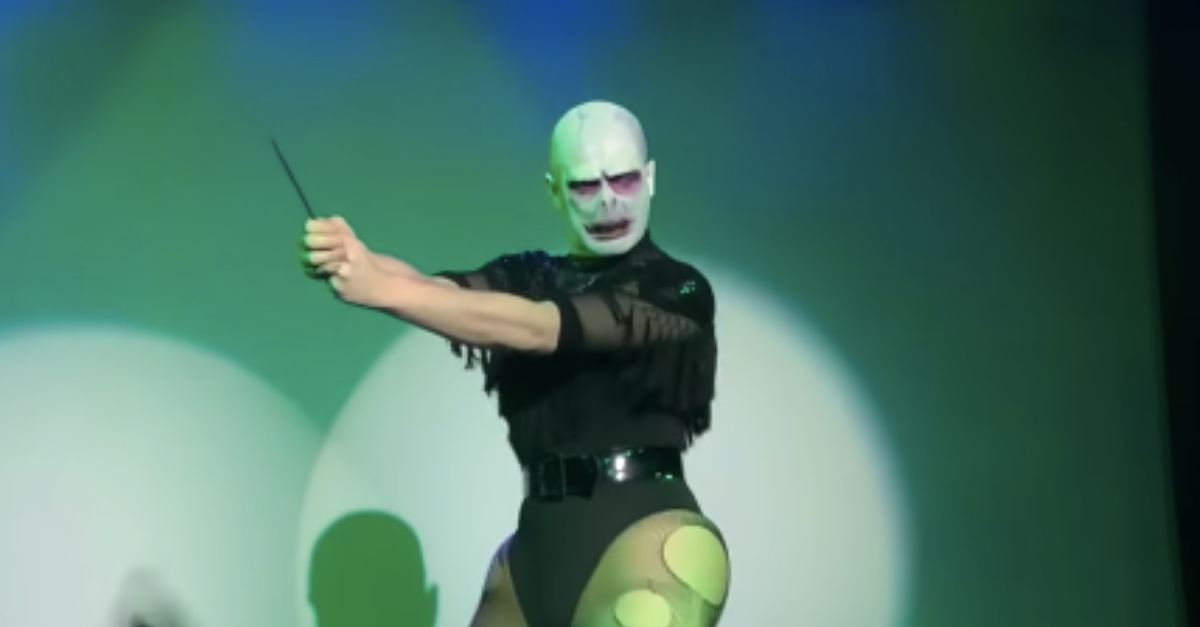 Lord Voldemort is one of the most popular villains today. Even non-fans of “Harry Potter” can easily identify the bald Dark Lord. But have you ever seen him perform a burlesque dance while fighting “Hairy Otter”, to the tune of Ariana Grande’s hit track “Dangerous Woman”?

Drag queen Florida Elizabeth Man paid tribute to Grande with his drag performance which he uploaded on YouTube and Twitter on Sunday, Oct. 7. Her video, which has gone viral, has garnered over 150,000 views on YouTube and 1.7 million views on Twitter, as of this writing.

Lip-syncing to Grande’s hit track, Florida Man performed a striptease starting with her gloves. Lady Voldemort then removed her wizard robe to reveal a seductive black tassel bodysuit, with lace and silver accents and ripped black fishnet tights — an ensemble He-Who-Must-Not-Be-Named will not be caught dead wearing.

Just when one thinks that is all there is to Florida Man’s performance, Lady Voldemort went and proved to muggles (humans, for “Harry Potter” non-fans) that she can do burlesque as easy as she can cast “Avada Kedavra.” Of course, the performance will not be complete without the fantasy series’ protagonist, Harry Potter, this time, re-imagined as “Hairy Otter.”

The two battled each other, casting a series of spells. Following the queer re-imagination of the popular series, their duel did not end exactly the way the seventh book and movie adaptation said it would — probably promoting love, not war, the two ended up making out at the end of the performance.

Naturally, netizens were quick to react to Florida Man’s performance. Some took to the comments section of the posts to express their admiration.

Others seemed to have had difficulty comprehending what they watched.

I don’t know what I just watched pic.twitter.com/HNngcooalO

Same here.I feel like I need to wash my mind out with some alchohol…

Fans of the series did not waste the golden opportunity to comment “Harry Potter”-related remarks.

“A few months ago I produced a ‘Harry Potter’ tribute show called She Who Must Not Be Named and did my first number as Lady Voldemort. It was so fun and so absurd that I knew I wanted to bring the character back in wilder situations,” Florida Man told Teen Vogue on Monday, Oct. 8. “So when the Ariana night popped up, everything just clicked. It had to be ‘Dangerous Woman’ and it had to be a burlesque number.”

“Part of what I’m doing with Lady Voldemort is reimagining a universe where the canon of Harry Potter is queerer and weirder, and I think that speaks to a lot of queer people and Harry Potter fans alike,” Florida man added. “It’s also just ridiculous.” JB