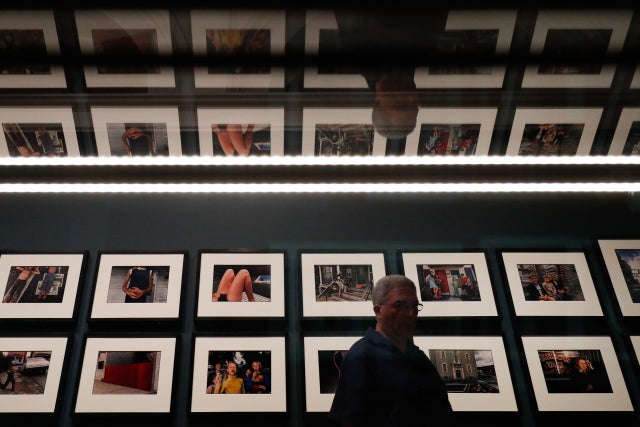 A visitor views the "Collecting Photography: From Daguerreotype to Digital" exhibition opening the new photography centre at the Victoria and Albert (V&A) Museum in west London. Image: Adrian Dennis/ AFP

The exhibition “tells the story of photography as a way of collecting the world, from the medium’s invention to today,” V&A director Tristram Hunt told reporters on Wednesday.

“In an era when everyone’s iPhone makes them a photographer, the V&A’s Photography Center explores and explains the medium in a compelling way,” he said, showing off the four new galleries.

Museum-goers enter the galleries through an installation of more than 150 cameras spanning 160 years.

Visitors can handle cameras from throughout the ages — and witness the improvement in technology — from an 1820s camera obscura, through a 1920s Kodak No.2 Brownie to a 1930s Leica II rangefinder and a 1970s Polaroid 1000 instant camera.

Through stereoscopic viewers, visitors can see three-dimensional pictures from the 1851 Great Exhibition at the Crystal Palace in London, and some of the earliest photographs ever taken of Japan.

The exhibition includes photojournalism, with 1930s copies of the Picture Post magazine, displaying the realities of war overseas.

The pictures include shots of 1960s stars including Jimi Hendrix, The Beatles, the Yardbirds and model Twiggy.

The catalyst for developing the new exhibition space was the transfer last year of the Royal Photographic Society’s collection of 270,000 photographs, 6,000 cameras and 26,000 books to the V&A.

The museum’s archive of more than 800,000 photographs is now one of the world’s largest and most important collections of historic and contemporary pictures.

A second section of the center, due to open in 2022, will include teaching space, a browsing library and a studio for photographers’ residencies.

The museum is also looking to bring photography exhibitions from its expanded collection to Shanghai and across China. AB