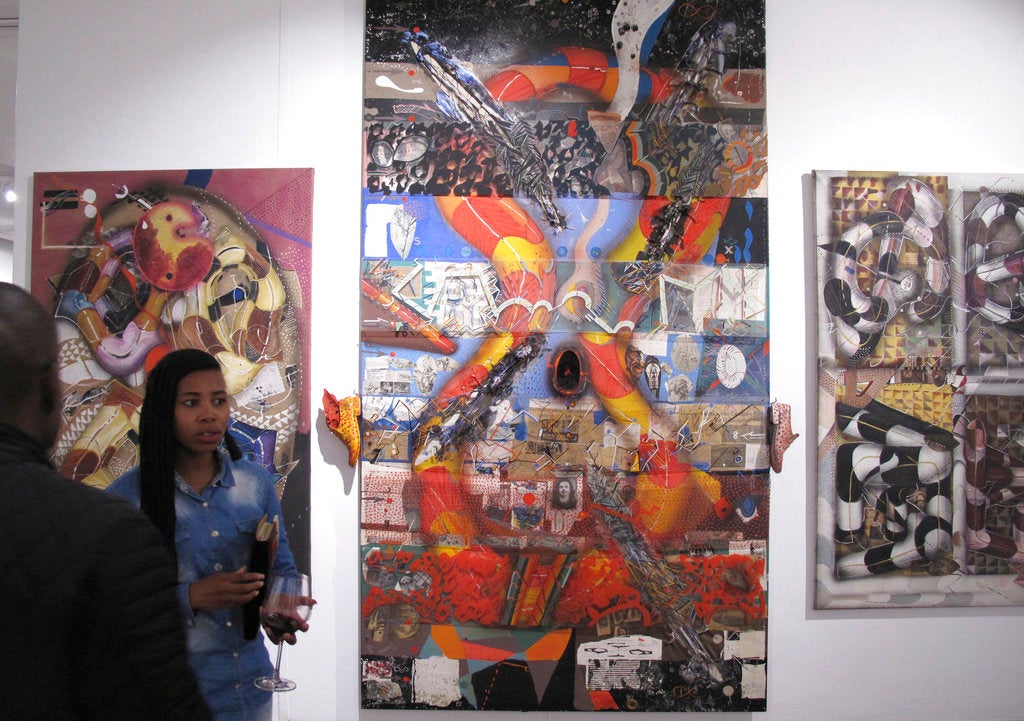 People inspect the work of South African abstract artist Christo Coetzee, who died in 2000 and is largely unknown in his home country, at the opening of a retrospective exhibition on Thursday, Oct. 4, 2018. The show at the Standard Bank Gallery in Johannesburg aims to stoke interest in Coetzee, who won some international acclaim decades ago. Image: Christopher Torchia / AP

Forgotten artist from South Africa gets a retrospective show

JOHANNESBURG (AP) — The abstract work of South African artist Christo Coetzee, who died in 2000, was widely shown around the world, including at a 1961 exhibition at the Museum of Modern Art in New York. Yet Coetzee is largely unknown in his home country, an outsider whose experimental methods seemed alien to both the early apartheid-era establishment and later protest art that rejected white rule.

A new exhibition in Johannesburg, the biggest show of Coetzee’s work in decades, aims to stoke interest in a prolific artist who barely gets mentioned in local classrooms even though prominent universities in the country have large collections of his pieces.

Its curators see Coetzee as a stylistic counterpart to some contemporary South African artists who incorporate wire, plastic and other debris in “assemblage” art that explores inequality and other social challenges.

Coetzee, who died at home at age 71, was the “forefather of abstract expressionism in South Africa,” said Shonisani Netshia, co-curator of “The Safest Place is the Knife’s Edge,” a Standard Bank Gallery exhibition that opened last week and runs until Dec. 1.

And yet, fellow curator Wilhelm van Rensburg said, Coeztee is “not in the public imagination.”

In the 1950s and 1960s, Coetzee was part of a global movement of abstract expressionism that hardly resonated in South Africa, then in the grip of a race-based system that denied basic rights to the black majority.

As a white artist free of those restrictions, Coetzee went to Europe and traveled to Japan, where he collaborated with an avant-garde group. In 1975, he scandalized the South African art scene by slashing 23 of his paintings at a Cape Town gallery and stitching them back together.

The vandalism was possibly a way of saying that white rule in South Africa would eventually disintegrate, and Coetzee later designed the cover of a novel by a writer who fiercely opposed apartheid, according to van Rensburg.

Even so, Coetzee was not overtly political at a time when art clearly depicting the hardship and repression of the time was becoming a potent way to express opposition to apartheid, which ended in 1994 when Nelson Mandela became president.

Coetzee, whose works include “Butterfly Lighting in a Diamond” and “Homage to Leonardo,” seemed content as an artist on the fringes. He is reported to have said that “you can’t be a prophet to society” and that “you want to be yourself.”

It did mean, though, that the pioneer of South African abstract art was mostly ignored in a country still struggling to move past its legacy of racial conflict, despite progress toward reconciliation.

“We’re still playing catch-up with our own history,” said arts writer Percy Mabandu, describing apartheid as “an assault on memory.”

And maybe Coetzee’s work during white rule was more politically relevant than some people thought, Mabandu said. When “ugliness” is legislated, he said, “beauty is an act of protest.” AB