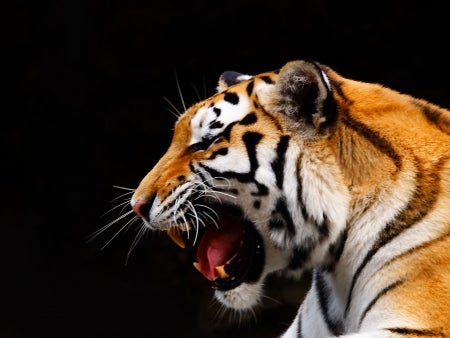 Man-eating tiger to be lured with Calvin Klein cologne

Authorities desperate to capture a tiger gone “rogue” in India plan to use Calvin Klein cologne as part of their operations, reports the New York Times.

A female tiger named T-1 has been linked to as many as 13 deaths in central India, striking fear in the town of Pandharkawada. T-1 and her cubs have been hunting humans: she grabs them by the neck and they chomp down on their flesh.

Tigers don’t normally eat human flesh, but the lack of prey such as deer has left her few options, said hunter Nawab Shafat Ali Khan in the report.

For six months, forest rangers have been trying to trap her but to no avail, even after enlisting the help of hundreds of foot soldiers, veterinarians on elephants and sharpshooters. The goal is to tranquilize her, but this is tricky. The one time she was shot with a dart, it slipped and she escaped.

A new item in their arsenal is the Calvin Klein Obsession cologne.

Even a forestry official admits it’s funny, but there is scientific basis to why wild cats are attracted to it.

The men’s cologne contains civetone which is taken from the scent glands of a civet but now made synthetically. Previously, a jaguar was lured into a camera trap in Nicaragua with the perfume as it rolled over in the spot with the scent, according to a 2014 report in the Scientific American.

The Supreme Court has even stepped in, deciding that if she is successfully captured, T-1 will be taken to a refuge center or a zoo. Otherwise, she can be killed. Niña V. Guno/JB

Rumble in the jungle: mother bear fights off Indian tiger

Tiger escapes from circus, is killed after roaming Paris streets