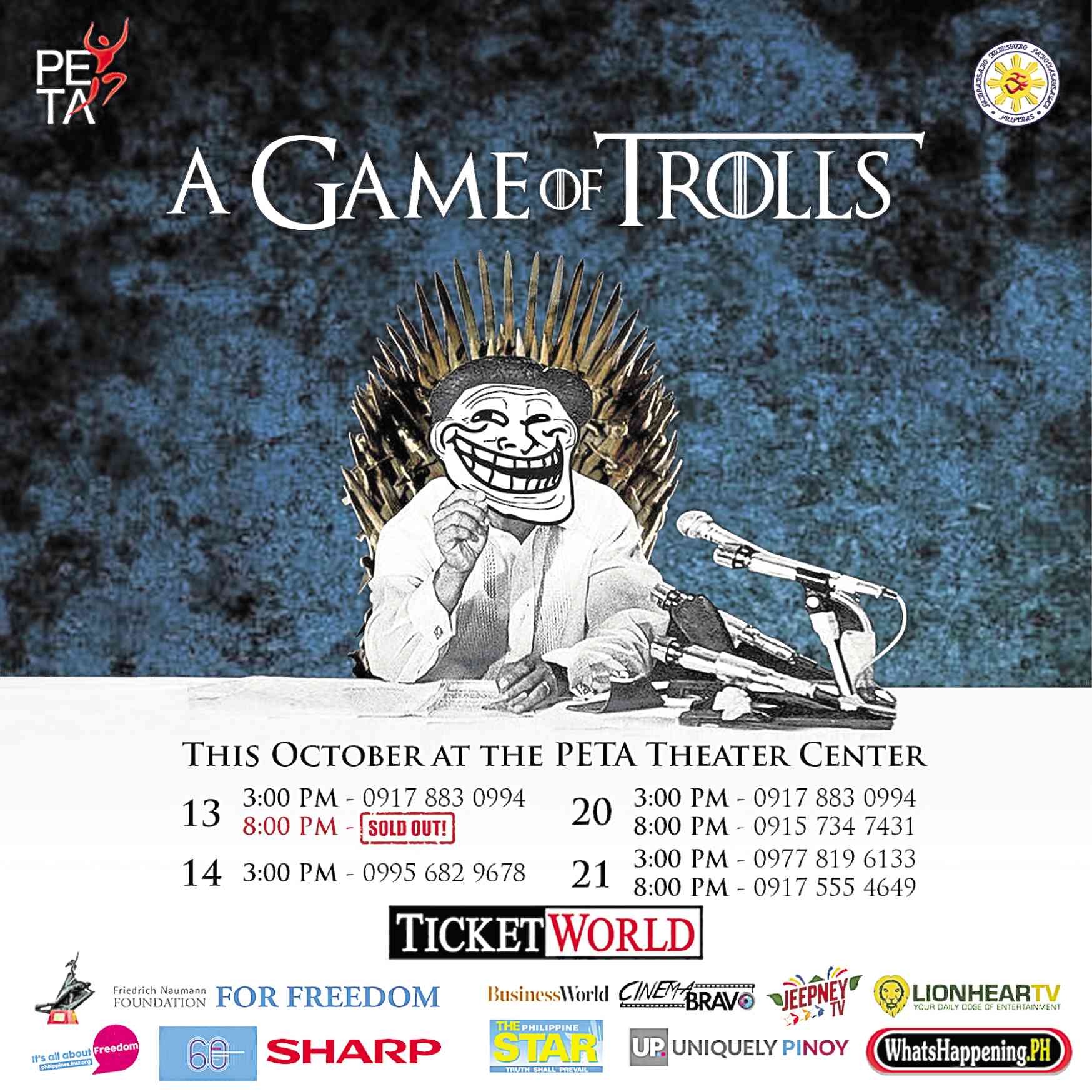 Can’t stand them online? Try ‘A Game of Trolls’

“Martial law is the best thing that happened to the Philippines in 1972. We won’t be the developing country that we are right now if it wasn’t for the Marcoses. Learn your history,” says the social media account without a real name.

Pro-HR netizens will probably go beastmode on statements like these. But before you go lit AF, take a step back, look at the bigger picture and think if “making patol” online will do you any good.

Instead of wasting precious time arguing with faceless beings who hide behind screens, why not log out and watch “A Game of Trolls,” Peta’s martial law musical for millennials (and millennials-at-heart).

It is the story of Hector (Myke Salomon/TJ Valderrama), a professional keyboard warrior for Marshalls of History, a troll center running a pro-martial law campaign led by Bimbam (Vince Lim).

Hector, the tactless and detached internet tough guy, effortlessly infuriates anti-martial law advocates with his insensitive and random unsolicited comments about the victims of martial law, making him the top guy in the trolling game.

This prompts the “visits” of the Ghosts of Martial Law from the Internet Cloud, reminding him to never forget their struggle to liberate the country from the dictatorship.

Their stories, along with his own mother’s, Tere (Upeng Galang-Fernandez/Gail Billones), made Hector reexamine his involvement in the trolling business.

Directed by Maribel Legarda, written by Liza Magtoto and music by Vince De Jesus—the same team behind “Caredivas”—“A Game of Trolls” is not only an ode to the heroes of martial law, it is also an appeal to the millennials to #NeverForget that the dark history that took away democracy decades ago has spawned the same strain of oppressor that is taking our democracy away right now.

It is a reminder that by understanding the history of the people’s struggle for democracy, we are also keeping in mind to #NeverAgain allow a tyrant to steal it from us.

It is an attempt to stimulate discourse on truth and history in the age of social media: to look beyond the memes and fake news, and to encourage thinking critically and acting responsibly both online and offline.

“A Game of Trolls” will have a limited two-weekend run on Oct. 13-14 and 20-21 at the Peta Theater Center. For tickets, call Peta at 7256244; or visit ticketworld.com.ph, petatheater.com, @PETATheaterCenter on Facebook, Twitter and Instagram.