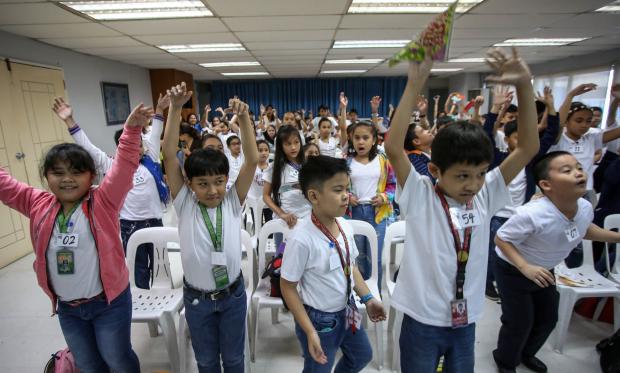 Eleven students from Metro Manila schools made the cut to the semifinal round of the 8th Inquirer Read-Along Festival Storytelling Competition on Saturday.

Eighty-eight young storytellers from 11 schools in Metro Manila, Cavite and Rizal provinces joined the elimination round held at the Inquirer main office in Makati.

All contestants underwent an intensive one-day workshop divided into three batches on Sept. 22, 29 and Oct. 6 at the Inquirer office in Makati and SSA in Quezon City.

It was attended by record-high 168 students aged 7 to 12, accompanied by 21 teachers as their storytelling coaches, from 13 schools in Metro Manila, Cavite and Rizal provinces.

Participants learned the basics of book-based storytelling, body language and the delivery of appropriate questions, as well as storytelling techniques in eye contact, facial expressions, diction and voice modulation, poise and pacing.

Only the workshop participants, who have not won in any previous storytelling contest, are eligible to join the competition and vie for the title of Festival Storytelling King/Queen during the second day of the Inquirer Read-Along Festival on Nov. 17.

With the theme “Maging Magiting,” the two-day festival of marathon storytelling on Nov. 16-17 at the Inquirer office will feature celebrities and role models as guest storytellers.

Those interested in joining the festival may call Odeng Orolaza at (02) 897-8808 ext. 330 or e-mail [email protected] Slots are available on a first-come, first-served basis.

Inquirer Read-Along is a corporate social responsibility of the Philippine Daily Inquirer which aims to teach love for reading among children. Since 2007, more than 20,000 children ages 7 to 13 from over 50 cities nationwide have joined the program, which have featured over 400 celebrities and role models as storytellers. /atm