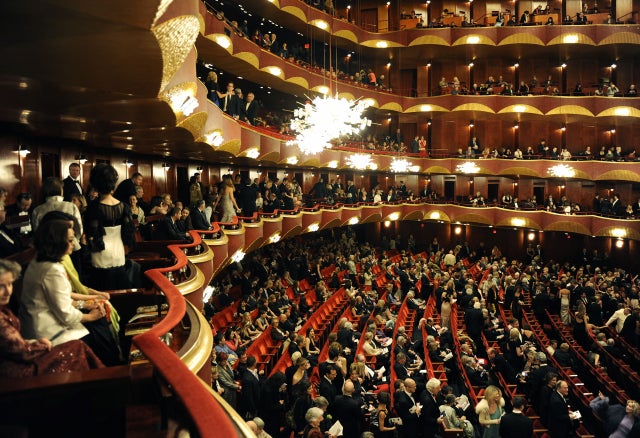 The Metropolitan Opera is digging deep into its bag of tricks as it attempts to lure in younger generations more familiar with "Mozart in the Jungle" than its long-dead inspiration. Image: AFP/Timothy Clary

The Metropolitan Opera is digging deep into its bag of tricks as it attempts to lure in younger generations more familiar with “Mozart in the Jungle” than its long-dead inspiration.

At a “Fridays Under 40” party earlier this month, young opera prospects, some donning tuxedos and gowns, took selfies with cast extras and mingled over wine and cheese in a space set below one of the Met’s signature Marc Chagall murals.

Others gathered on a terrace overseeing Lincoln Center as an anticipatory buzz built ahead of an opulently-staged performance of “Samson et Dalila” moments later.

The parties, 10 in all throughout the season and offered at a discounted ticket price for a performance, are part of the Met’s efforts to reposition itself as it rethinks its artistic vision under a new music director.

The initiatives are meant to put the 135-year-old organization on stronger financial footing by effectively offsetting inevitable declines in the audience that remembers Pearl Harbor and the JFK shooting with one whose seminal experiences were 9/11 and the financial crisis.

Ticket sales are stable, but well below the standards of opera’s golden era in the last century. In the 2017-8 season, the house sold 67 percent of seats out of total revenue capacity, the same as the prior season, according to Met data.

Moody’s in May downgraded the Met’s credit rating, writing that the opera group would “continue to attract audiences and donors,” but that “box office revenue will likely continue to soften in keeping with sector trends.”

Just ahead of the start of the 2018-9, the Met announced that it reached agreement with its orchestra and chorus unions to begin offering Sunday matinees next year, a potentially significant boost given the popularity of the Saturday matinee.

In another key step, the Met also announced it would extend its season into June and take a mid-winter break in February, a weak period for ticket sales.

New music director Yannick Nezet-Seguin signaled more change in a September interview with the New York Times, announcing plans for collaborators with the Public Theater and the Brooklyn Academy of Music and plans for newer politically-tinged works, such as an opera adaptation of “Dead Man Walking”.

“This is a very strong message that I want to send: about how opera is actually for everyone,” Nezet-Seguin told the newspaper. “It’s an illusion to think that everyone will love it. But it’s not an illusion to try to make everyone feel welcome to it.”

Nezet-Seguin is the replacement for James Levine, whose exit was accelerated last year amid accusations of sexual abuse.

To an extent, the Met’s dilemma is mirrored at other leading opera houses such as Paris and Milan, which have also launched programs to draw in millennials. But the Met’s size of around 3,800 exceeds other major houses by more than 1,000 seats and poses particular challenges.

Another factor is that fewer schools in the US teach about music, notes Gillian Brierley, assistant general manager for marketing and communications at the Met.

“We have a lot of work to do to help people make that first step through the door because there’s less classical music knowledge in the younger generations that are coming through,” she told AFP.

Marketing around the performances seems designed to disabuse notions that the Met will be stuffy, showcasing opera’s endless capacity for timeless yarns about betrayal, conflict and intrigue, as well as love and sex.

Brierley said the marketing is intended to convey that the work will satisfy audience hunger for narrative and storytelling. Potential opera converts are also focused on an opera’s title and composer, recognition of singers and production style, she added.

She said the Met planned to make use of a second entrance that will become available in late fall. The revamp was needed to reduce crowding at the box office because so many more people buy tickets at the last minute compared with the subscription-loving generations of the past.

The new space will allow for post-performance drinks or group talks. Surveys show young viewers are interested in social experiences, an endeavor that also helps publicize the Met if experiences are posted to social media, Brierley said.

Amanda Reyes, who is taking a masters in industrial organization psychology, said she was drawn to opera while growing up in Ohio, but didn’t explore it until hearing about the Met’s program.

“I like the idea of it, but it seemed like something out of reach,” she said in an interview. “A lot of it is to know you won’t be the only younger person here.”

She has since come several times, seeing “Carmen” and “Madama Butterfly”, among others, and bringing other newbies to the parties.

She tells friends, “‘Come, you can dress up, there’ll be drinks and snacks and you can enjoy the space for a little bit,'” she recounted. “Even if people aren’t super-interested in the opera, that’s usually enough to get them to say, ‘Yeah I’ll check it out.'” CC

Performer hurt in fall during ‘Faust’ at Met Opera