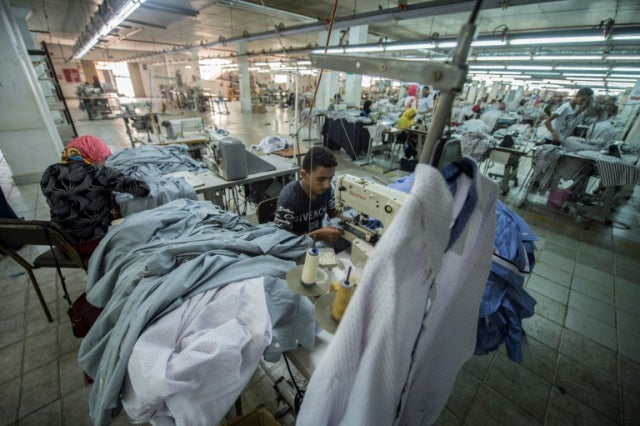 A tailor sews cotton shirts at the Marie Louis clothing and textile factory in the 10th of Ramadan city, about 60 kilometers north of Cairo, on July 29, 2018. Image: AFP/Khaled Desouki

Treading carefully among his sprawling green plants in the Nile Delta, Egyptian farmer Fatuh Khalifa fills his arms with fluffy white cotton picked by his workers.

Durable, fine and luxuriously soft, cotton sourced from Egypt has long been seen as the best on the market.

But recent years have been far from smooth for the North African country’s farmers.

“I cultivate 42 hectares (104 acres) and it’s expensive … while the price (of cotton) is very low,” said Khalifa, who has been growing the premium long-fiber variety for over 30 years.

Profits are “meager,” he lamented, his head shaded by his cap from the unforgiving sun on his farm in Kafr El Sheikh.

Cotton was once Egypt’s main source of wealth in the 19th century, as the Nile Delta provided fertile grounds for the crop used to make the towels, sheets and robes coveted by Europe’s burgeoning bourgeoisie.

But decades of fierce international competition has diminished returns.

Well-marketed short-fiber cotton — while lower quality than the long-fiber variety — looks good and has increasingly been used by textile giants, dealing a heavy blow to Egyptian players.

The United States and Brazil are now the world’s top cotton exporters, according to this month’s report by the US Department of Agriculture, followed by India and Australia, leaving Egypt trailing far behind.

Back in 1975, Egypt exported $540 million of cotton. By 2016, the sector’s export receipts had fallen to $90.4 million, according to the Massachusetts Institute of Technology.

The popular uprising that toppled president Hosni Mubarak in 2011 dealt a fresh blow to the cotton sector, as political and economic chaos hit production and export chains.

But a trade spat between the US and voracious importer China has seen benchmark global cotton prices fall afresh, as traders take fright over Beijing imposing tariffs.

The commodity was trading at a shade under $0.77 per pound (0.45 kilos) in early October, after reaching $0.95 — the highest level in more than six years — in early June.

Egypt’s cotton union says buyers are even demanding lower prices, without triggering any intervention by the government.

Others offer a different diagnosis of the sector’s ills.

“The drop in prices is not in itself a bad thing,” said Ahmed El-Bosaty, CEO of Modern Nile Cotton, one of the biggest companies in the sector.

“A rise in productivity rather than prices would ensure better incomes for workers,” he said.

A cotton expert at the agriculture ministry acknowledged that modernization is key.

“Productivity is rising,” said Hisham Mosaad. But cotton enterprises must invest in mechanization, as the industry is still entirely manual,” he added.

Another challenge is that few Egyptian firms make finished products.

Egypt does not have “the factories or the means allowing us to transform it into fabric,” he lamented.

The state has tried to spur activity, boosting areas under cultivation over the last four years by around 50,000 hectares, to more than 140,000 hectares.

In an experimental move, the government in September even allowed the cultivation of short-fiber cotton, but only outside the Delta region.

But many companies see the situation as urgent.

Even though official exports of Egyptian cotton rose 6.9 percent by volume in the three months to the end of May compared to the same quarter of 2017, there was a 57.9-percent fall in consumption of Egyptian cotton at home, due to the domestic market turning to imported products.

At the high end of the value chain, designer Marie Louis Bishara runs one of the few Egyptian firms that produces high quality finished products locally for the international market.

Young men and women work side by side in her modern factory in northern Cairo, in roles ranging from overseeing looms to packing finished shirts.

Promising Egyptian quality, she has dedicated one of her lines to local long-fiber cotton.

“We try to show the world that if you want to make luxury products, you have to use extra long cotton from the Delta,” she said.

Shirts, trousers and jackets stamped “Made in Egypt” have gone from the design stage on her factory floor to grace shop shelves in France, Italy and her home country. CC