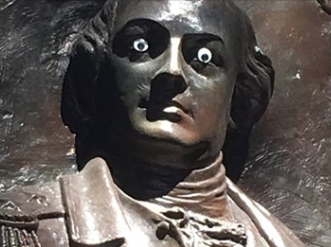 Monument of hero in American revolution gets ‘googly eyes’ makeover

Authorities in Savannah, Georgia, United States are keeping a close eye on potential leads after a monument dedicated to hero Nathanael Greene was defaced.

An Oct. 11 Facebook post from the City of Savannah Government shared images of the monument which features a likeness, of Greene — a general from the Revolutionary War — that has been altered with the addition of a pair of “googly eyes.”

The post stated, “It may look funny but harming our historic monuments and public property is no laughing matter, in fact, it’s a crime.”

“It disturbs me that I’m missing two mint condition, extremely rare, 1733 googly eyes from my collection,” noted one Facebook user.

Police were reported to be studying CCTV footage to identify the culprit. JB