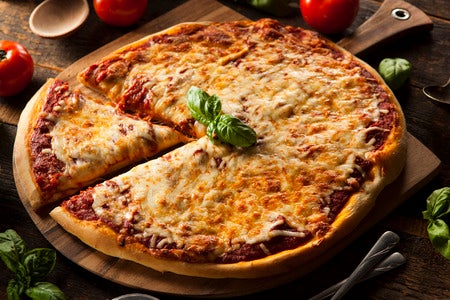 Man eats pizza every day for more than 30 years

One man from New Jersey has eaten pizza on a daily basis since his childhood.

La Vecchia learned of Roman’s odd diet when they met 10 years ago at a pizza shop. Roman revealed that he was a picky eater and his mother tried to curb his pizza preference by letting him only eat it for dinner. But for lunch, he had some variety: a peanut butter sandwich every day. Sometimes, he would even have peanut butter on toast or crackers.

When he began working, he would have pizza for both lunch and dinner for about 10 years. He has since switched back to peanut butter sandwiches for lunch.

Roman prefers his pizza without toppings, has them fresh and usually buys them from outside. He claims that he has no health problems, reasoning that pizza has three of the four basic food groups.

He is also upfront about his habit to the women he dates so that he won’t scare them. Now married, he shared that he had pizza twice on his wedding day and honeymoon.

Roman, a teacher, is a creature of habit even in the other parts of his life. As with his diet, he does not do much to change his routine: he has lived in the same town his entire life, and even the TV shows and music he consumes have remained the same.

For instance, he estimates that he has watched a “Star Wars” movie between 50 to 100 times. Niña V. Guno/JB

The man behind pineapples on pizza dies at 83

Couple on honeymoon buy hotel after getting drunk