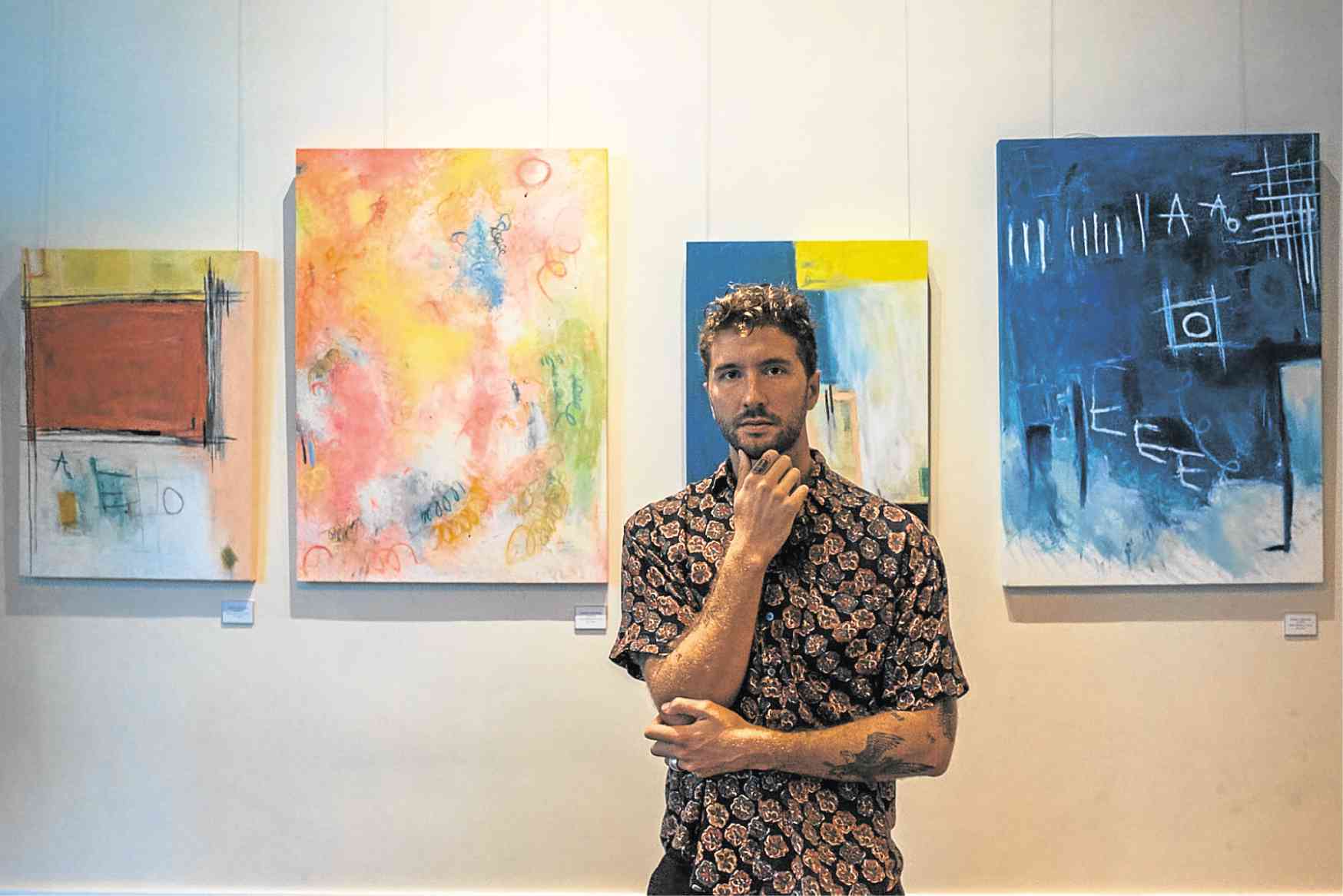 How do I interpret what nostalgia is. -PHOTOS BY ALEXIS CORPUZ

The e-vite to the opening of “The Complexity of Nostalgia,” an exhibition of paintings by Los Angeles-based artist Matthew Adam Ross at Manila House in Bonifacio Global City, felt the need to name-check Lauren Hutton, Jonah Hill, Emily Ratajkowski and Vincent Gallo among the aficionados who have added his works to their collections.

Another celebrity-approved contemporary artist!—was the first thought that came to mind.

The artworks themselves were strong and expressive, however, so we decided not to hold that against him.

Good thing, too, because the young man we met was passionate about his work, articulate, and apparently just as bemused as we were about the circumstances that brought him to the Philippines for the first time.

Lifestyle: The mention of Vincent Gallo in the e-vite threw me for a while because I can’t hear his name and not think about that scene from “The Brown Bunny.”

Matthew Adam Ross: Yes, I know. It’s funny because my ex-girlfriend is a filmmaker and is really good friends with Vincent Gallo, so I met him through her and he bought three charcoal drawings from me. He’s kind of a weird guy, as you can imagine, based on “The Brown Bunny” and a lot of his films, but he was really good friends with Jean-Michel Basquiat in New York in the early ’80s and he’s an interesting guy to talk to about art, especially in New York, back when the art scene was really progressive.

I guess that’s part of being a contemporary artist in the age of Instagram, you can be doing that one day and the next day you’re here…

Totally. Katrina Razon bought a couple of my pieces and put them on her Instagram page. Rocio Olbes, whose husband Antonio is a founding member of Manila House, bought work. Other members of Manila House bought work and that’s how I met Bambina (Olivares-Wise). It all happened very fast and I do have to credit Instagram because it’s so accessible and so seamless, to be able to curate this online portfolio and then have people inquire about your work directly to you. You can send them photos and have this seamless discussion.

I guess at your age, that’s par for the course. How old are you now?

Twenty-nine. I look at my generation as the last that wasn’t raised with social media. I didn’t have a cell phone until I was 16, because no one had cell phones. Facebook started when I was at the very end of high school, so I still remember what it was like before, when you actually had to walk up to a girl and ask her for a date.

Even when I started doing art, I didn’t use Instagram at all. Instagram hadn’t really become what it is now, this online portfolio for artists. I would say the past two, three years, Instagram has become really big for me.

Everyone would see it. My gallery in LA, my friends in New York and Europe, my parents. Last night I was just posting stories. As much as I get frustrated with social media, it’s very, very useful if used the right way.

Where did you grow up?

In a town called Laguna Beach, an hour south of Los Angeles. My parents still live there. It’s a nice break from the city. I have my studio in LA and then I’ll want to surf or be in nature or on the beach, and it’s just an hour away.

What were you doing before you got into art?

In school I did art, but I also studied Economics. I moved to New York and initially wanted to do some sort of business. I was doing art, but I was raised by my parents to think that art was not a profession. Very 1950s, blue-collar, American style—you had to have a job, you had to have health benefits. Even if you don’t like it, it doesn’t matter.

How did you get around that?

I tried it and I just couldn’t do it. I hated it. I started taking art more seriously and I was selling a little bit, but not enough to sustain a living in New York. So I started doing welding and fabrication. I would build sets for fashion clients like Alexander Wang and Burberry and Gucci for Fashion Week. From there I started to make art for other artists like Hanna Leiden. She hired me and three other people to build this public art installation in New York City. And I built stuff for Jeff Koons, too, stuff that went to his studio and was then painted.

After a while I thought I should just be focusing on my own work. That’s when I left New York and moved to LA and just started focusing on my own practice. As soon as I did that and was 100 percent committed, good things started to happen.

Did you go to art school?

I didn’t, I’m self-taught. I credit my mom. She’s an artist, she went to art school, she has a Master of Fine Arts degree from the Ontario College of Art and Design which is a really good art school in Toronto.

Working with abstraction like you do, do you ever worry that you might be going over ground that someone else has gone over before?

Oh yeah. I feel that it’s really important to acknowledge your influences. I do think that influence is inevitable, but it still has to go through your new brain. It comes into your head and kind of morphs into your own creativity.

There was a time when you needed some grounding in art theory when you looked at paintings, but your work seems a lot more direct and intuitive and not so cerebral.

Yes, it’s easier to digest. I like that side of my creativity. I definitely do have a side of me that is much more theoretical.

This whole series was made after a year of not working with canvas, when I was deep into my sculpture. And I kind of put that experience onto the canvas. The linear expression and some of the color palettes I’m using are very much rooted in my construction.

The name of the show, “The Complexity or Nostalgia” is just that: How do I interpret what nostalgia is? When I think of nostalgia, I don’t necessarily think about a time that is better or worse than it is now. Nostalgia is a very abstract term. For me it’s like a warm feeling when I think about those pieces and that nostalgic environment in my head.

The memories that come to mind aren’t necessarily milestones in my life—they’re points in my life that keep coming up in my head.

Exactly. It’s a feeling that is very nostalgic. How do I describe it? I can’t, really. The same way that I can’t explain why I use certain colors. It just happens. One thing leads to another. A lot of the newer work I’m doing, it’s kind of like jazz—you know where you’re starting from, but you don’t necessarily know when you’ll end.

Some of the pieces, to me, feel like you’re playing with energy or energies and trying to capture them on canvas.

Some of the pieces are more geometric and linear, and it’s kind of interesting that all the pieces are necessary, relative to the whole series. It’s like a musical album: every single song has its purpose and the whole, completed project is like one unit.

They are like energy studies or tension studies, a study of the rules I create in my studio to protect myself from going too far.

You mention jazz—is music important to you? Is it something that inputs into your creativity? What’s on your playlist?

Very much. I listen to music all day, every day. Like all the time. When I paint I kind of like bebop, like Charlie Parker or Miles Davis, or piano like Billy Strayhorn or Thelonious Monk. Bebop is very abstract, it has a structure but the structure is completely relative to the musician. The way that notes will go—like fluid descendants are like curves, and there’ll be sharper angles and jagged marks that do parallel a lot of the sounds.

That’s an interesting point that I haven’t thought of that much until now. They are like sounds, in a way—visual representations of sound.