How to take Manila FAME into the digital era | Inquirer Lifestyle ❮ ❯ 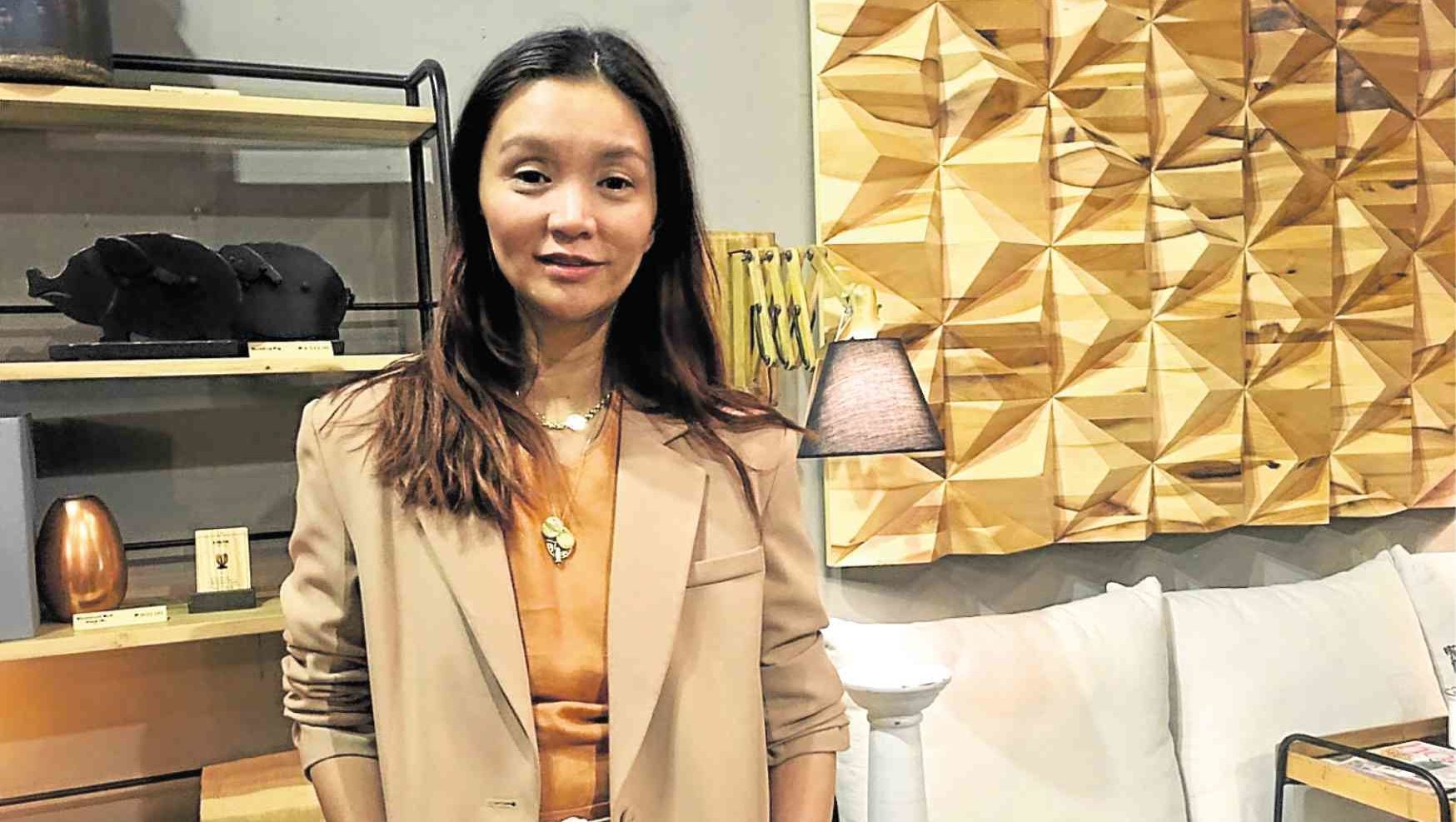 “One of our initiatives is to begin a digital trade show that leverages on content marketing,” Citem executive director Pauline Suaco-Juan says, at the Triboa Bay Living showroom in Makati. —PHOTOS BY CHECHE V.MORAL

How to take Manila FAME into the digital era

Pauline Suaco Juan faces a challenge no other executive director of Center for International Trade Expositions and Missions (Citem) has dealt with: Ushering the Department of Trade and Industry’s (DTI) export marketing arm into the digital age.

In the run-up to the 68th Manila FAME, the biannual home and lifestyle trade show (Oct. 19-21, World Trade Center, Pasay City)—the first under the helm of Juan, a former publishing maven—Citem unveiled a sourcing website. Touchpoint has enhanced features where, initially, 15 brands and designers share their background stories. The trade show is also amplifying its Instagram presence (@Manilafame).

The development is yet not quite what Juan—who signed on for the job only two months ago—had in mind. “But that is the seed that will become Manila FAME digital,” she says. “In essence, it’s really about storytelling, being able to tell the world what’s good about a certain product, a certain material, a certain exporter. And there’s five-million-and-one stories of that.”

Shrinking budgets and the high cost of staging, and participating in, trade shows make it imperative for the agency to think of creative and cost-
efficient ways to reach global buyers.

“There was too much emphasis on putting up trade shows and there are many ways to market our products than just trade shows,” she says. “That’s something that we’re going to be studying, the proper mix of how many trade shows to do and where, and what other forms of marketing we can employ.”

Juan’s recent appointment was initially met with some curiosity, with industry insiders used to seeing either bureaucrats or one among them at the helm of Citem.

She was an outsider, a media veteran who helmed a leading fashion magazine, Preview, for nearly 15 years.

A graduate of Ateneo de Manila University, she received her Masters in Media and Communications from the London School of Economics. She worked in broadcasting, at Probe Productions, before her move to print.

Her retirement two years ago preceded the demise of glossies at Summit Media, her former employer, which went all-digital early this year.

“It is marketing,” she says of her new job. “It is, in essence, storytelling, which, when you think about it, isn’t different from what I was doing at Preview. We were selling soap, shampoo, cosmetics.

“The most fun part of that job was really being able to speak about local talent, discovering a small talent and then, through the years, build on that story until they’re able to succeed as businesses, as brands. Also, the other creative talents, the photographers, the collaborators whom we would use in producing our stories. In Citem, you get to do that every day, except that the medium is different.”

“That’s how she was even in Preview,” says Ichi Apostol-Acosta, former group publisher at Summit Media, whom Juan brought in as Citem consultant. “What she loved about the job most was discovering new talents.”

Citem fell on Juan’s lap somewhat by accident. The agency approached both Amina Aranaz-Alunan and Rajo Laurel for the post, but both designers declined as they had full-time jobs.

Separately, they suggested Juan, who was retired and happily spending her days traveling with family. But she wasn’t looking for a second career.

“It really was just to give back,” she says of her decision to say yes. “You can’t complain if you don’t do anything about it, right? I realized that the opportunity to lead an institution like Citem doesn’t come every day… For a creative to come in who can relate and see, and has seen the struggles of the industry and will be able to apply [what she learned]…”

Though she didn’t ask why DTI wanted her for the job, she surmised it was because of her digital experience. While at Summit, she was also editor in chief of Stylebible.ph (now Preview.ph) from 2008 to 2016.

Digitalization has always been in the plans of Citem, she adds, “but there was nobody there who had experience to initiate it.”

“When I came in, they (Citem) were fine. This Manila FAME was 80 percent ready. They could put up a trade show with their eyes closed. I think my value to the institution is, because I come from the creative industry, I have different ways of seeing and doing things. I’m also bringing a slew of other creatives and connections.”

She’s quickly learning to navigate the bureaucracy and learning its language.

“I didn’t realize Citem had a much broader portfolio than just the design show. I used to use [the terms] Citem and Manila FAME interchangeably… The e-mails stress me because the jargons are so different. I go to a budget hearing in Congress, and I don’t know what to expect…”

But her previous job has prepared her well. “With limited budgets, we all know how to source funding when there’s none. We get collaborators onboard and really harness the community to work together.”

Of Citem’s existing programs, she and her team have yet to decide which ones are worth keeping, and which need to be scrapped.

But, Pasola adds, “I think it’s important to follow the programs because it’s hard for manufacturers and designers when the leadership changes, and especially if the leader is not quite there.”

There’s also excitement within the fashion community, with designers who haven’t exhibited at Manila FAME in recent years, expressing their desire to Juan to show in the future.

She thinks the problems in local fashion are institutional, that’s why Filipino fashion designers haven’t quite had success in the export trade.

“Even when I was in Preview, the business model of the local fashion industry wasn’t where it was supposed to be to be able to export,” Juan says. “A lot of designers are stuck on a service business model and they aren’t really brands. To be able to export, you have to invest and [do things] properly… If you need a lookbook, you can’t say, ‘wait I’ll shoot’ and send it two weeks later. By then you’ve been forgotten.”

Even with the guidance of fashion veterans like Josie
Natori and Lulu Tan-Gan at Manila FAME in the past, few, if at all, have succeeded because “they can’t tell you how to run your business,” Juan says.

“Maybe it’s also ambition. It pains me to say this, but some of our designers like to be big fishes in a small pond. To dream big, to have that goal, it will force you to graduate to that [global] business model… The accessories designers are more prepared because they’ve been doing the shows longer.”

Her team has been in discussion with the Fashion and Design Council of the Philippines to tackle the issues. She has also gone to the trade shows in Paris, Premiere Classe (fashion) and Maison et Objet (furniture and lifestyle), “to see firsthand how we can strengthen our support for our designers, not just in fashion but also within furniture, homeware and gifts.”

Her conservative estimate for Manila FAME’s digitalization will take a year. She’s not, however, saying they will do away with the trade shows entirely. The other Citem shows, like IFEX Philippines, are still studying digitalization.

“There’s no replacement for seeing the actual item, touching it and holding it. But with shrinking budgets, maybe we can’t do it twice a year or every year, so there is an option for you to be able to be in touch the other 363 days of the year.” And like a trade show, the Touchpoint website will be monetized.

There will be 360 micro, small and medium enterprise exhibitors at Manila FAME this weekend, and more than half of the confirmed trade buyers are first-time attendees.

“I came into this job with a three-year time frame, because that’s what the job required. The goal is to launch the digital Manila FAME. I think of it in terms of that, rather than the number of years [I want to stay in the job]. If it takes me a year or three to do that, then I can tell you later, I hope I can stay longer,” she says.

“The other thing that I want to happen is for the design community to come together again —because they should be coming together. This is your showcase to the world. And if you’re not there, you’re not part of the country’s efforts.”