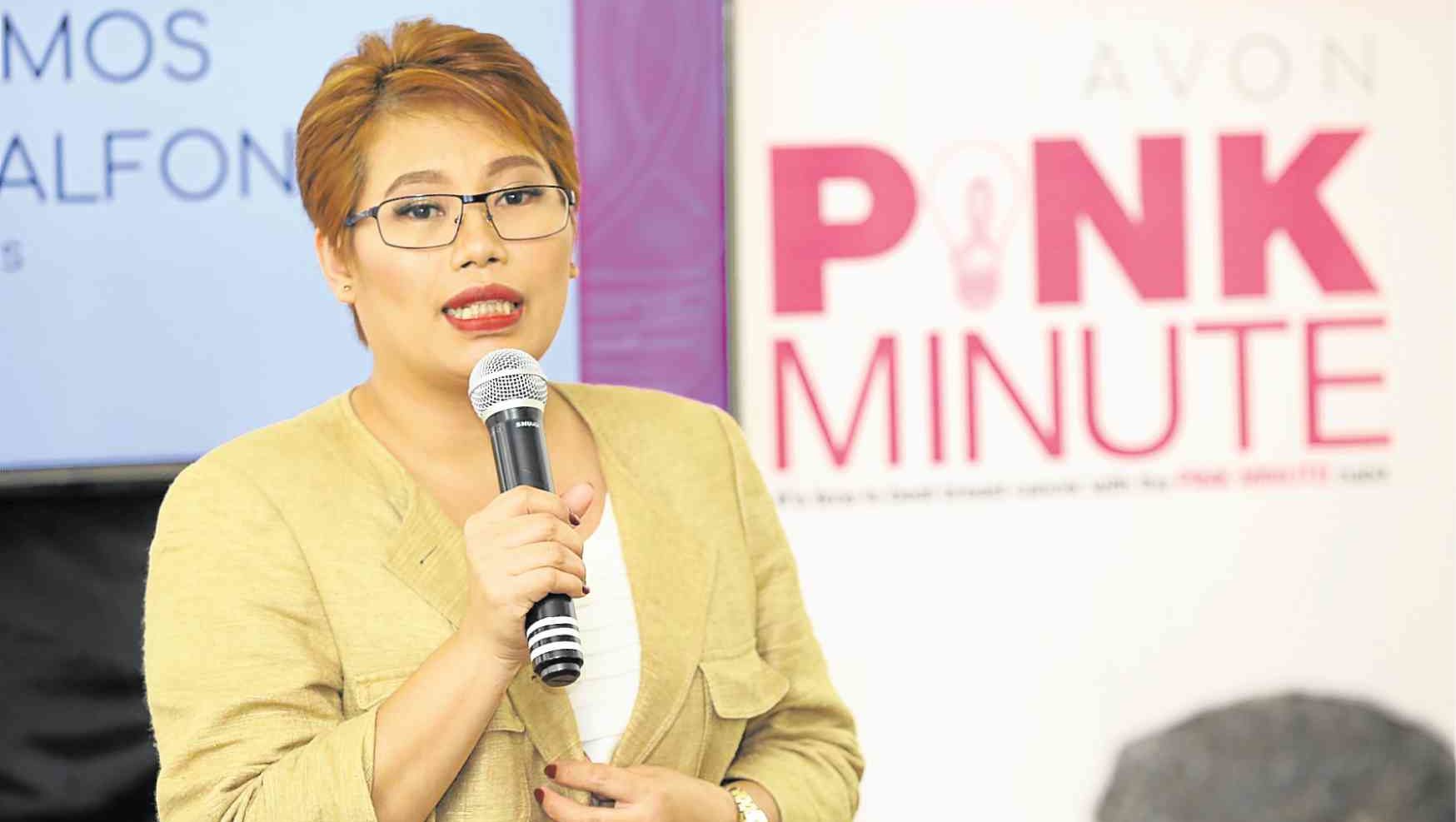 Erjean Quimos: “Cancer, that’s just a word. It made me tougher and a fighter.”

If women needed a visual reminder to take breast self-examination seriously, they got it in a number of iconic landmarks and establishments lit up in pink.

The campaign called Pink Minute culminates on Oct. 20 with the gathering of Avon’s celebrity ambassadors, associates and representatives, and women from various breast cancer support groups for the symbolic lighting of the Quezon City Memorial Monument at the Quezon Memorial Circle.

The importance of breast self-examination cannot be emphasized enough. In its latest findings, the World Health Organization’s International Agency for Research on Cancer revealed that breast cancer remains the most common form of cancer in women worldwide.

Over 2 million cases of breast cancer are reported each year, and 626,000 women succumb to the disease annually—staggering numbers, considering the disease can be beaten with early detection and proper medical treatment.

“Early detection means life,” says Avon Philippines general manager Razvan Diratian. “Our target is to make all women in the Philippines aware of the importance of breast self-examination. The sooner they detect any symptoms and seek medical attention, the greater their chances of survival.”

Like most breast cancer survivors, Erjean Quimos and Grace Tan Alfonso discovered a lump in their breasts by accident.

Quimos, who was taking a shower when she felt the hard mass, didn’t waste time. The next day she went straight to the Philippine General Hospital (PGH) for tests. A mammogram, breast ultrasound and biopsy revealed stage 2 breast cancer.

Upon hearing the news, she broke down and cried all the way from PGH to her home in Valenzuela, Bulacan.

“I thought about my husband, my kids,” says this stay-at-home mom of two, in the vernacular. “But I also thought that God wouldn’t give me a problem I couldn’t handle. I told myself, ‘I can survive this, too. I will get better for my family.’”

Alfonso didn’t just draw on her family for strength. The teacher with a preschool and tutorial service thought about the students who look up to her.

Before her 2013 diagnosis, the mother of four had a lumpectomy in 2009 to take out a mass that grew from the size of a monggo seed to a corn kernel in a matter of weeks. Although the mass was benign, another grew in its place four years later, and turned out to be stage 3 breast cancer.

What should have made them lose hope and faith, in fact, has only made them stronger. Quimos and Alfonso—who underwent a mastectomy, chemotherapy and radiation—continued to manage their households, bald head and all.

Alfonso went back to teaching, and Quimos approached government agencies for financial assistance.

“I used to think breast cancer was a death penalty. Now I think it’s a blessing,” Quimos says. “It made me tougher and a fighter. Cancer, that’s just a word. There’s a solution for it and people are willing to help. You just have to be persistent.”

For Alfonso, who marks her fifth year cancer-free, it’s all about early detection. “Don’t wait for something small to get bigger and worse,” she says. “And nothing is impossible with prayer. God will make a way.” —CONTRIBUTED