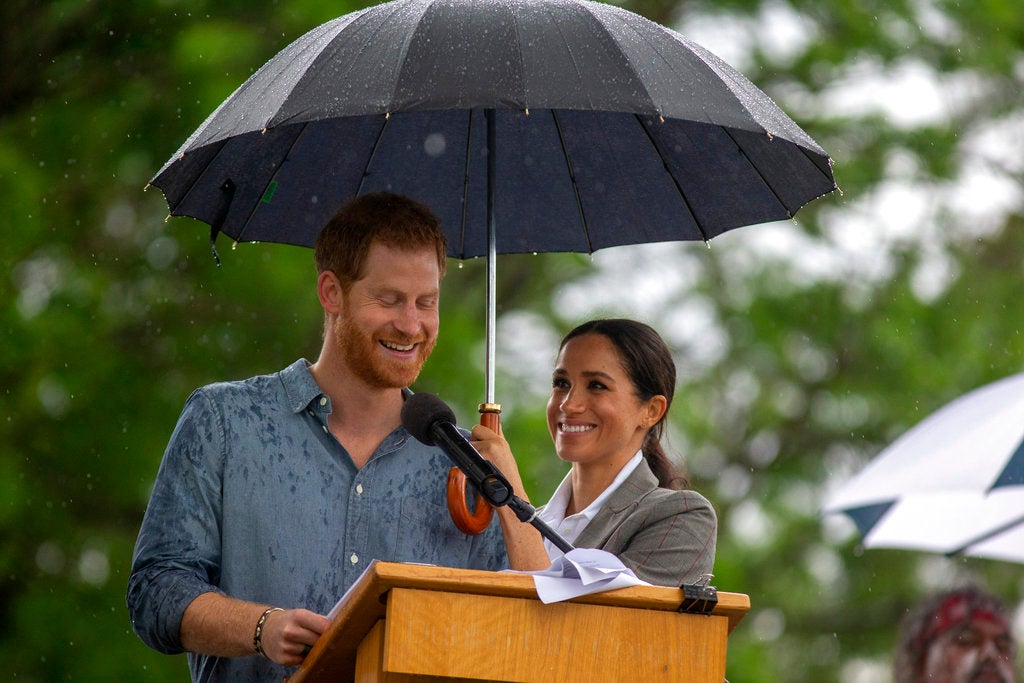 Britain's Prince Harry and Meghan, Duchess of Sussex attend a community picnic at Victoria Park in Dubbo, Australia, Wednesday, Oct. 17, 2018. Prince Harry and his wife Meghan are on day two of their 16-day tour of Australia and the South Pacific. (Ian Vogler/Pool via AP)

DUBBO, Australia (AP) — The Duke and Duchess of Sussex were jokingly thanked for bringing England’s notoriously inclement weather to a drought-stricken Outback town on Wednesday in a rain-drenched visit to Dubbo during their Australian royal tour.

The former Meghan Markle brought banana bread that she baked in Sydney on Tuesday as a gift to a farming family outside Dubbo who were struggling to feed their cattle and sheep through two years of below-average rain.

The pregnant American former actress and her husband, Prince Harry, got their hands dirty throwing cotton seed onto hay used to feed the cows because of a lack of pasture.

Heavy rain started falling when the royal couple arrived later at a Dubbo park for a community picnic, but hundreds of cheering well-wishers remained enthusiastic.

The crowd laughed when Mayor Ben Shields said in a speech: “As your Royal Highnesses are aware, our region has been hit by a terrible drought. So we’re very pleased that you can bring some of that English weather with you today, and hopefully it will bring some relief to the farming families.”

While rain in recent weeks has been welcome, much more is needed to repair the economic and environmental ravages of the extended dry spell.

Meghan held an umbrella over Harry as he gave a speech, acknowledging the hardships the drought brought to the rural community and urging drought victims not to suffer in silence.

The crowd applauded when Harry touched on his own mental health struggles following the death of his mother, Princess Diana, in a car crash in a Paris tunnel in 1997. He was 12 at the time. Harry, now 34, revealed in an interview last year that he did not seek counseling until he was in his late 20s.

The prince ended by thanking Dubbo for its invitation and for sharing the stories, adding, “And the rain was a gift.”

Harry and his Meghan are on a 16-day tour of Australia, Fiji, Tonga and New Zealand.

The main focus of the tour is the Invictus Games, which start in Sydney on Saturday. The sporting event, founded by Harry in 2014, gives sick and injured military personnel and veterans the opportunity to compete in sports such as wheelchair basketball. NVG