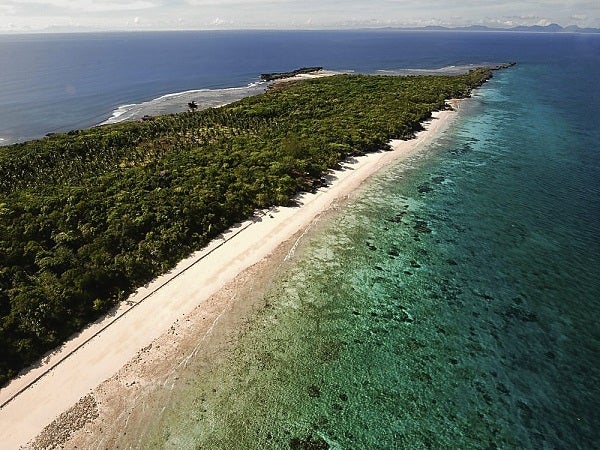 I’m a genuine sea lover and I dream of having my own secluded, private island getaway, where I can stay in luxurious splendor living next to white sand and blue waters. My dream even includes a gorgeous six-packed hunk serving me a fruit cocktail as he emerges out of the water!

That ultimate dream is now possible at the Alphaland Balesin Island Club (www.alphaland.com.ph). It’s a private paradise in one spectacular island and truly a dream come true (hunk not included, unfortunately).

Over the holidays, I got a group of friends to check out Balesin and spend a day in paradise. We headed to the club’s private departure lounge and took a brand new Cessna Caravan plane ride that landed 25 minutes later on an amazing concrete runway that we were told is almost twice the length of the Boracay runway.

Balesin is off the coast of Quezon, directly east of Manila. The island itself is only half the size of Bora, but it has over 7 km of pristine white sand ringing it. The developer, Alphaland Corporation, is building six themed villages around the island where members can stay.

We took a tour and saw Bali, drove up to the Costa Smeralda, imagined ourselves in St. Tropez, walked around Mykonos, zipped by Phuket and finally came home to the Philippine village. As a member gets 14 complimentary village nights per year, it looks like a cheap way to go around the world over six weekends!

At the club’s Welcome Pavilion, we met Balesin GM Marco Diaz and his friendly staff serving cold towels and pandan fruit drinks. Marco was a trove of trivia, regaling us on all the island stats as we toured the different villages in an elongated golf buggy.

Each themed villa has a spacious bedroom with a king-size bed covered with the highest possible threadcount bedsheet, and pillows that were as soft as clouds. The room electronics include a flat-screen satellite TV, iPod dock and Wi-Fi. For those who want to get off the grid, outside are a private sundeck, whirlpool and outdoor garden shower.

In Balesin Village, several beachfront villas are already complete, as well as a small restaurant. Nearby, a giant clubhouse, freshwater swimming pool and seawater floating pool are nearing completion. I was amazed to see work crews in the midst of the holidays.

The best part of the massive development is that it is maintaining as much of the natural topography and beauty of the island. Trees are fully preserved and our tour included a stop at a giant balete tree, from where the island gets its name. With its huge trunk and flowing branches, mother balete seemed almost mystical. Horse trails and jogging paths snake through the forests of Balesin, all preserved to maintain an eco-friendly resort.

At lunch we were joined by Aia de Leon, lead singer of Imago. Light years ago, we teamed up to singing the band hit “Taralets” on “Celebrity Duets.” Later she sang a lovely song, strumming a lone guitar to back herself up. What better way is there to enjoy an island?

(To those interested in Balesin, send an e-mail to [email protected] to arrange your own private tour. Payments for shares can even be loaned through Philippine Bank of Communications.)

It’s cool that paradise can be so accessible. PBCom just opened a new branch at the Alphaland Southgate Mall beside Dasmarinñas Village in Makati. Eric O. Recto, vice chair of PBCom, and I cut the ribbon at the opening. Eric told me that the bank is focused on continuing its growth to better service its clients.

Also at the opening was Babes Oreta, the suave president of Alphaland. I was impressed by the number of new stores in the mall as it shows how Babes has been attracting new clients. Near the PBCom branch is one of PhilWeb’s e-Games cafés, beautifully decorated in various shades of red. It must be good feng shui to have a bank beside an Internet casino.

‘The Sound of Music’

During the holidays, I also watched “The Sound of Music” at Resorts World Manila. My longtime friend Pinky Amador is part of the production, so I was delighted to finally catch the show.

My favorite talent manager Girlie Rodis has been asking me to have my youngest, Athena, join the production as one of the Von Trapp children. Stage mother that I am, I have been hoping she is interested, but unfortunately she is too shy. That can’t possibly be my DNA.

“The Sound of Music” has been extended to Feb. 12, so do check out one of the shows soon. The production and performance is truly world-class. After the show, Genting Hong Kong, operator of Resorts World Manila, presented a most generous donation of P17 million to ABS-CBN Foundation for their “Sagip Kapamilya: Operation Sendong.” Genting also donated the proceeds of that evening’s show, together with donations from the cast and crew of SOM plus the management team and employees of Resorts World Manila.

Resorts World has been so generous and that’s why good karma is always flowing its way. With the Year of the Dragon just around the corner, we should remember that charity brings us better luck.

I will be welcoming the Chinese New Year in Mandarin Oriental Manila once again. I am excited to hear what revered geomancer master Joseph Chau has to share to enhance the chi of the different animal signs. My favorite bag blogger Ingrid Chua (www.thebaghagdiaries.com) has posted the Chinese New Year menu, so foodies should make sure not to miss this fabulous affair.

Chico Angeles, food and beverage director of Mandarin, will be part of the crew making sure the celebration is even grander than previous years’.

The best way to prep for a lavish Chinese dinner is to join the Timex Run on Jan. 22. The run will be at The Fort and distances are 5K, 10K and 16K, and prizes await all the winners. Registration is extended until Jan. 18, so head to Timex Outlets and Riovana Stores.