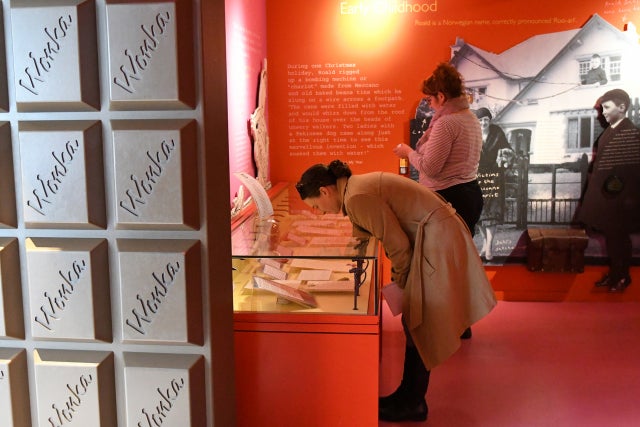 A museum including a recreation of the hut, in the same village of Great Missenden where Dahl lived, reopens to the public on Saturday following an extensive renovation triggered by a flash flood. Image: Robin Millard / AFP

From a battered armchair in a hut tucked away in the English countryside, author Roald Dahl dreamed up worlds that have enchanted youngsters across the globe.

Stuffed with hundreds of weird and wonderful mementos, the garden hut was where the children’s novelist wrote his fantastical tales.

A museum including a recreation of the hut, in the same village of Great Missenden where Dahl lived, reopens to the public on Saturday following an extensive renovation triggered by a flash flood.

“You can get the books and movies around the world but we are in the place where the stories were generated. That’s the magic of coming here,” said museum director Steve Gardam.

The museum offers visitors a glimpse into the man and method behind some of the best-loved stories of the 20th century, including “Charlie and the Chocolate Factory”, “Matilda”, “The BFG” and “James and the Giant Peach”.

The novels written by Dahl, who died in 1990 aged 74, have sold more than 250 million copies worldwide and have been turned into blockbuster films.

He invented hundreds of words and terms, such as whizzpopping, Oompa-Loompas, gobblefunk, snozzcumbers and scrumdiddlyumptious.

Born in Cardiff in Wales in 1916 to a Norwegian family, Dahl’s writing career began with weekly letters home from boarding school, creatively circumnavigating his unhappiness.

Dahl went on to work for oil giant Shell in Dar es Salaam in what is now Tanzania, then served in the Royal Air Force (RAF) during World War II.

An air ace, he was badly injured in a crash landing in Libya in 1940. Later in the war, he worked for British intelligence in Washington.

The museum, located in a former coaching inn on the village high street and the home of Dahl’s complete archive, is a combination of his real and fantasy worlds.

At the entrance, visitors walk through giant Wonka chocolate bar doors and are assailed by the smell of cocoa.

Inside, they can find objects such as his RAF flying helmet, logbook, binoculars and annotated map of Egypt.

Dahl needed back operations due to his war injuries and kept a vial of his spinal shavings in his writing hut — plus the ball of his replaced thighbone.

The interior of the hut was transferred to the museum from the family home in the village.

The replica also contains family pictures, cigarette butts, his glasses and cane, plus a heavy ball of foil made up from chocolate bar wrappers that he added to daily.

Even dust from the spartan hut — years of pencil shavings and eraser fragments — was transferred across.

The revamped museum aims to show how Dahl was inspired by the village in which he lived from 1954 until his death.

Many of the landmarks of Great Missenden appear in Dahl’s novels.

The village contains the high street of crooked houses that the BFG marched along; the petrol pumps from “Danny, the Champion of the World”, plus Matilda’s orphanage and library.

Dahl is buried in the churchyard, along with a snooker cue, a favourite power tool and a bottle of claret. Well-wishers often leave pencils.

To celebrate this year’s 30th anniversary of “Matilda”, The Roald Dahl Story Company — the family firm which owns his copyright — surveyed fans on who the forthright schoolgirl would be taking on nowadays.

US President Donald Trump topped the list and a cartoon fiberglass statue of Matilda facing down a blustering Trump now stands in the museum courtyard. AB