ABBA music is ‘complex, ahead of its time’ | Lifestyle.INQ ❮ ❯ 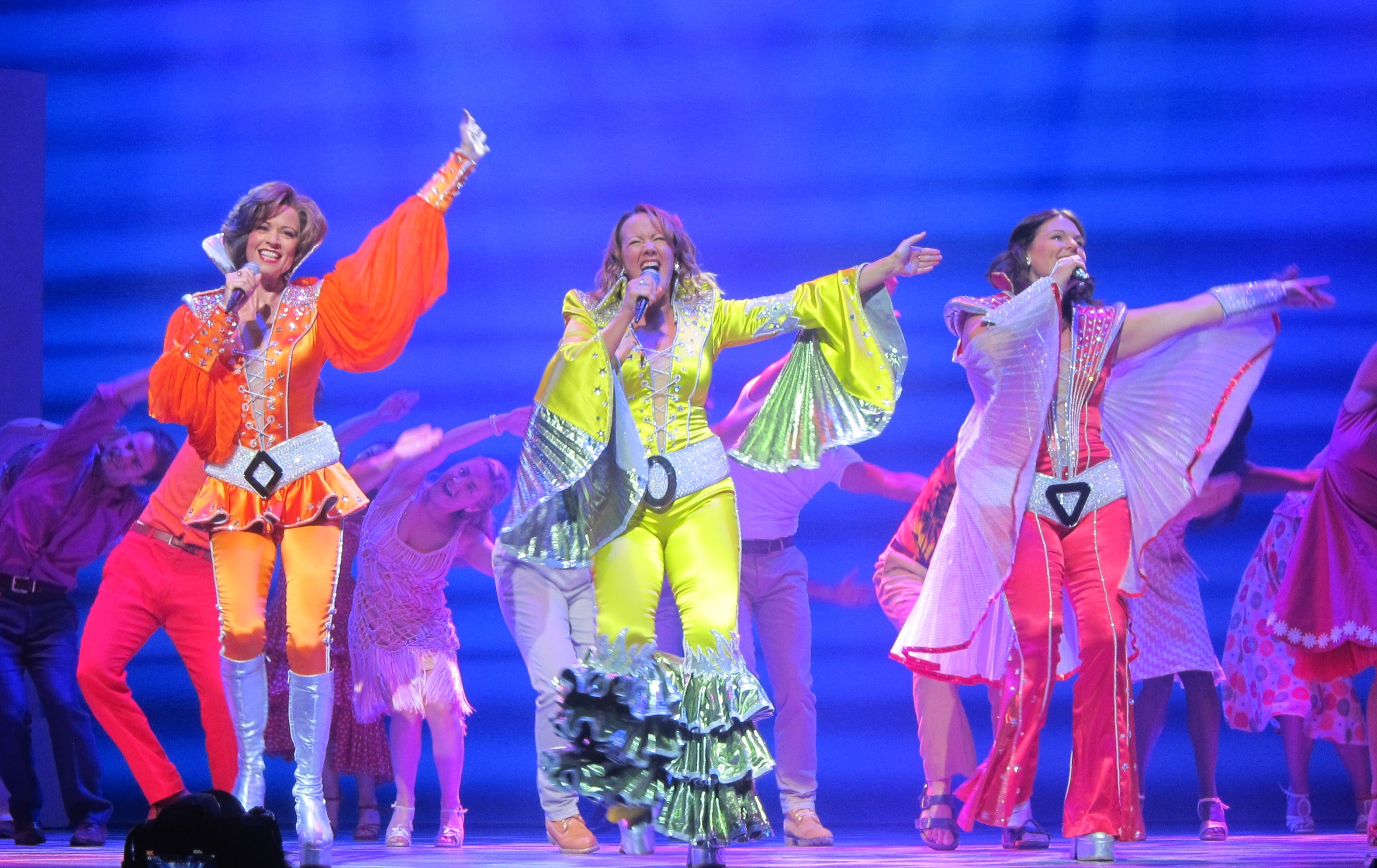 The Dynamos—Tanya (Helen Anker), Donna (Shona White) and Rosie (Nicky Swift)—have some of the best moments in “Mamma Mia!” The production tour’s Manila run, held at The Theatre at Solaire, has remaining performances this weekend. PHOTOS BY FRAN KATIGBAK

ABBA music is ‘complex, ahead of its time’

Mamma Mia!,” the successful, long-running jukebox musical built on the discography of Swedish pop superstar quartet ABBA, is on its final weekend at The Theatre at Solaire.

This is the second time the show has been staged in Manila. The maiden production in 2012 was held at the Cultural Center of the Philippines.

It will celebrate its milestone 20th anniversary in 2019.

With about 60 million worldwide audiences as of early this year, productions mounted in 16 languages and international performances in cruise ships that tour the Caribbean, “Mamma Mia!” continues to tease the senses with, for instance, the spandex-clad numbers, the “hot” Greek island setting, and the wonderful music written by ABBA’s Björn Ulvaeus and Benny Andersson.

“Catherine Johnson, who wrote the script (as well as the screenplay for the two ‘Mamma Mia!’ movies), did a very clever job of putting the story together… and popping in these amazing ABBA tunes,” said Daniel Crowder, who plays potential dad Harry Bright, during media interviews with the cast.

The story of a mom named Donna Sheridan, her soon-to-wed daughter Sophie, and the three possible fathers-of-the-bride depicts family and single-parenting, friendship, romance and reminiscences of youth, all anchored on ABBA’s music, which is much more than just ’70s pop and disco tunes.

“The music is so good that there are many songs that have many themes within them, such that the writers were able to create the story around it,” explained Tamlyn Henderson, who plays Sam Carmichael, one of the potential dads, about the deceptiveness of ABBA songs.

In fact, “Mama Mia!” features 22 ABBA tracks, from the perky title track to the euphoric “Dancing Queen,” to ballads like “Chiquitita,” “I Have a Dream,” “Slipping Through My Fingers,” “One of Us,” and uplifting melodies such as “Super Trouper” and “Thank You for the Music.”

“It’s quite complex music, actually,” said Crowder. “You think it’s quite simple [because] everyone knows the words and can sing along to the music but, to unpick it, it’s actually quite complicated. I think [the music was] ahead of its time when they (ABBA) were writing these songs.”

“Mamma Mia!” debuted in London in 1999, but British theater, film and TV producer Judy Craymer had hatched the idea of an ABBA-based production for film or stage years earlier. At the time she was an assistant to the English lyricist-librettist Tim Rice, who had collaborated with Ulvaeus and Andersson on one of Rice’s musicals, “Chess.”

“I started talking to them about it in the mid-’80s, and then in about 1995 Björn said, ‘If you can get the right story, maybe,’” recounted Craymer on how she pitched the idea.

The production has come a long way since, thanks in large part to the all-female triumvirate—Craymer, Johnson and director Phyllida Lloyd—who got the stage musical up and running.

At nearly two decades old, the show remains appealing not just for its music, but also for its casting choices.

“They’re very clever at ‘Mamma Mia!’” said Shona White, who plays Donna Sheridan (the character portrayed by Meryl Streep and Lily James in the film versions) in this international tour. She is actually the first actress to have performed both daughter and mother roles onstage.

“They don’t just see [if] you can sing the song, read the script, do the dance,” said White. “They put people together in trios (as in the case of the Dynamos, or Donna and her two best friends) and see the dynamic… how we feed off each other’s energy and what kind of vibe [is projected by a group of actors].”

“Auditioning is generally a hard process—tiring, emotionally draining, nerve-racking,” added Nicky Swift, who portrays Rosie, one of the Dynamos.

“Especially as you get older, there are specific parts you would go for, but I think the ‘Mamma Mia!’ process was one of the best. It was friendly,” said Swift.

The Dynamos, or lifelong friends and former bandmates Donna, Rosie and Tanya (played by Helen Anker), have some of the best moments on the show, their banter and song numbers equal parts naughty, hilarious and heartwarming.

So, yes, “Mamma Mia!” does have some mighty awesome titas and titos but, given the catchy songs, the relaxed Mediterranean setting, the variety of characters and the material’s wit and good vibes, it’s a stage musical experience for anyone between the ages of five and 85.